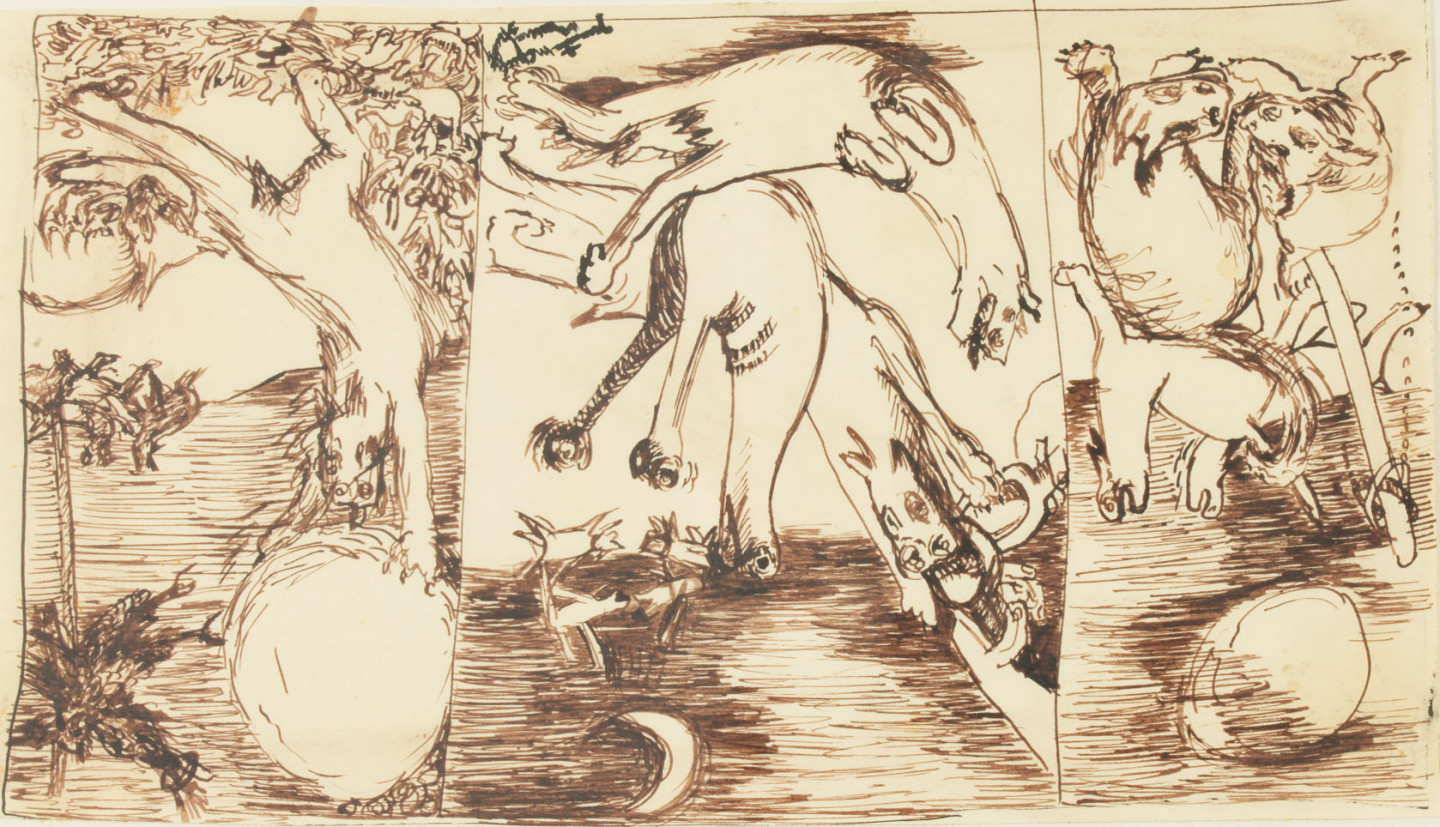 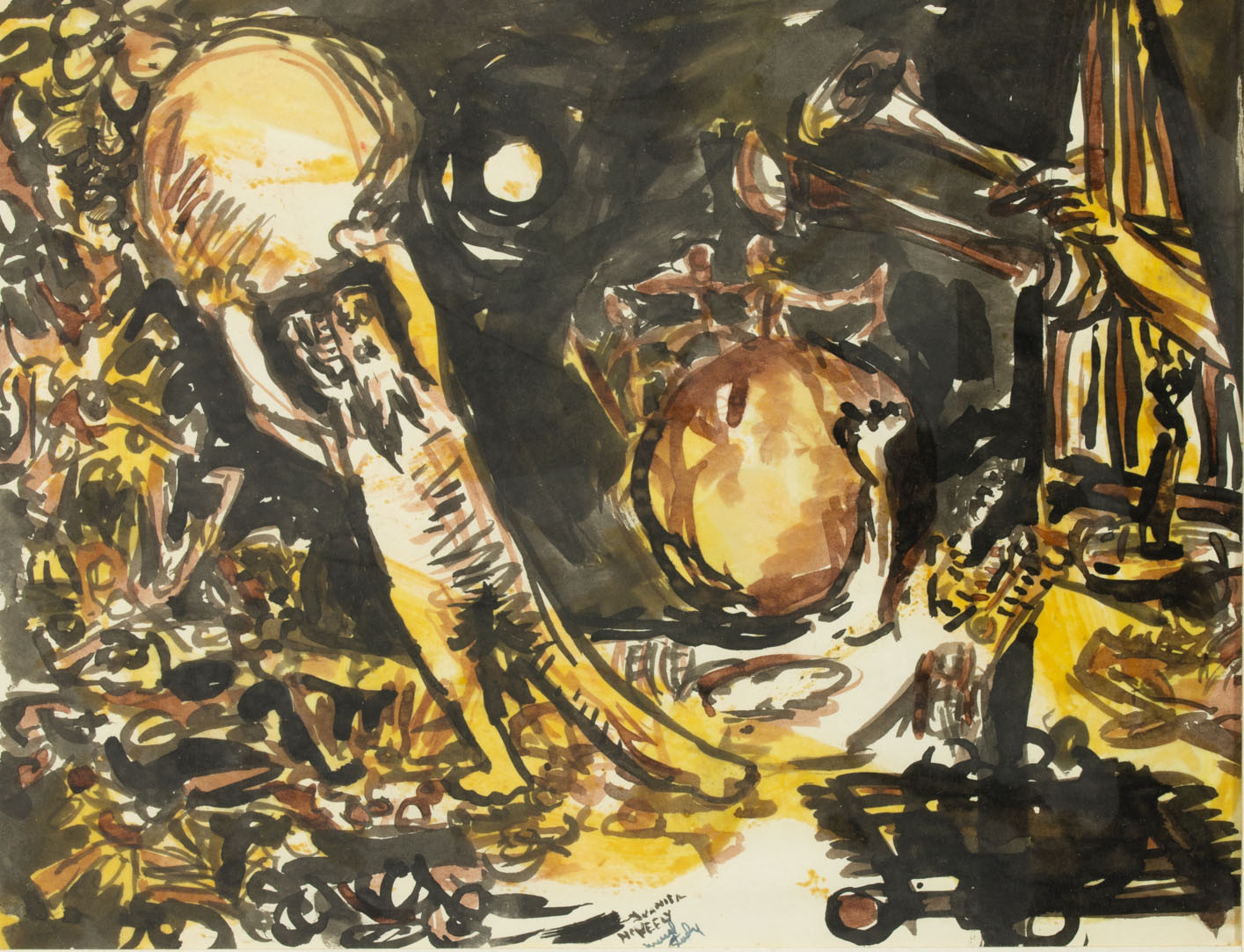 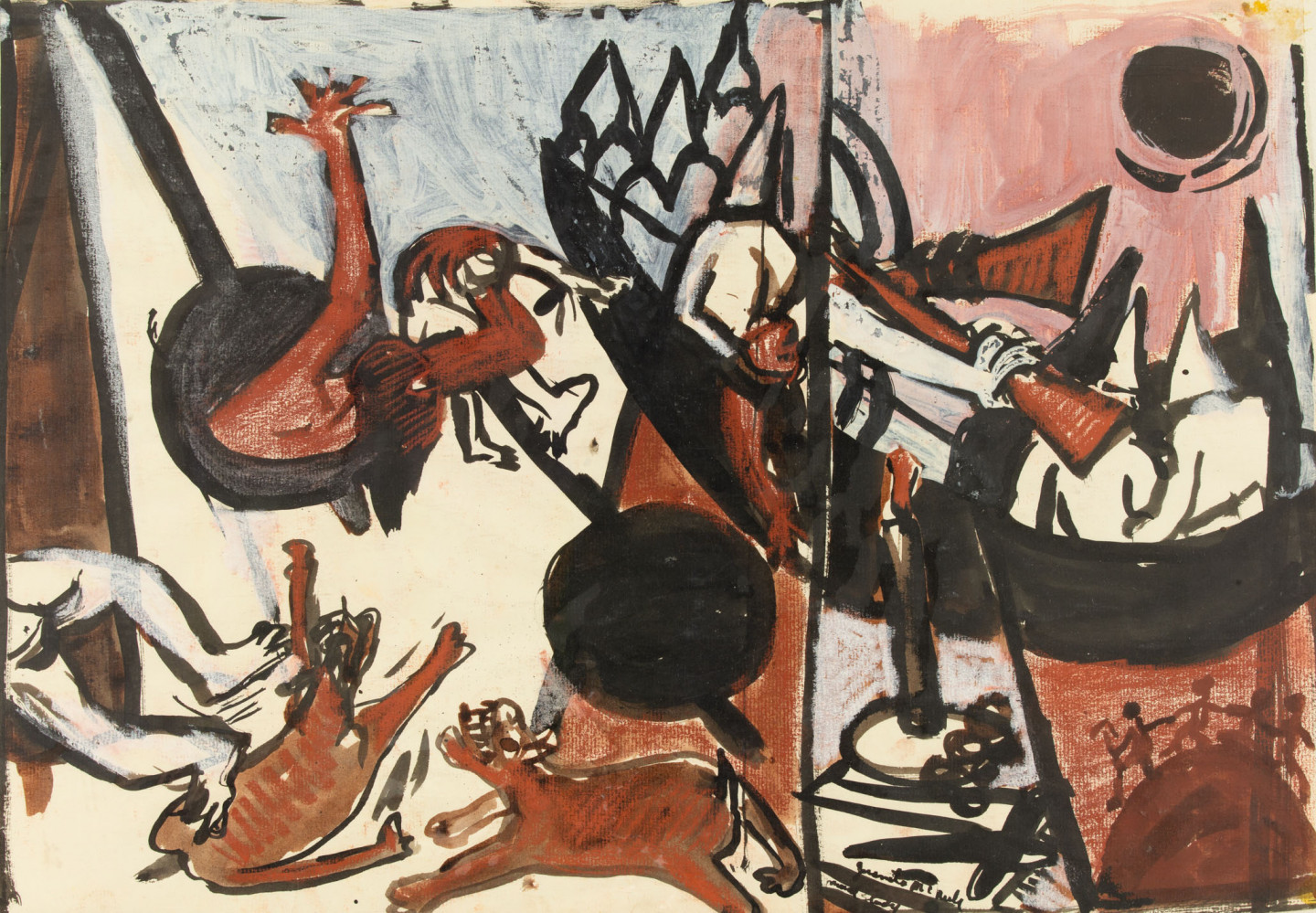 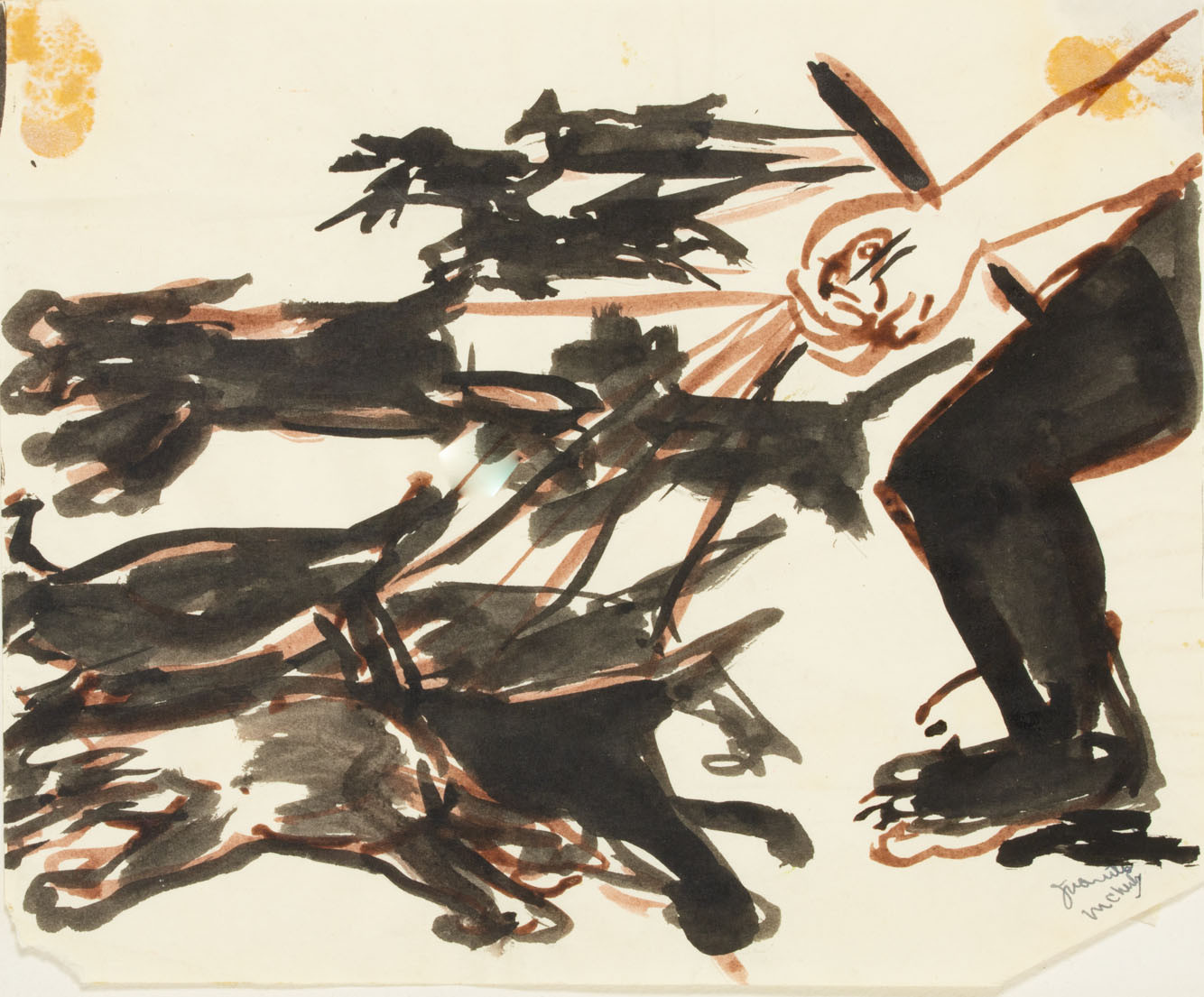 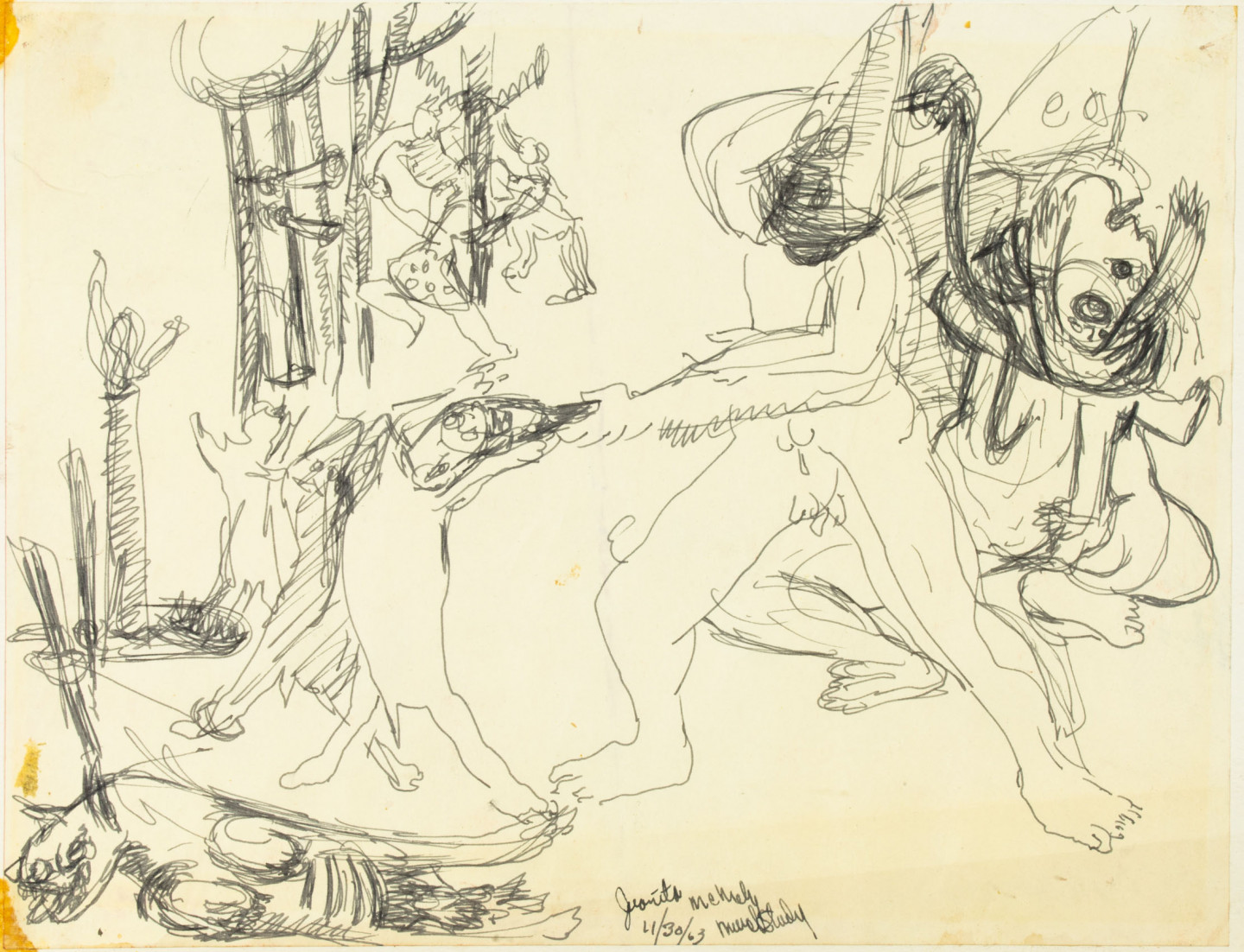 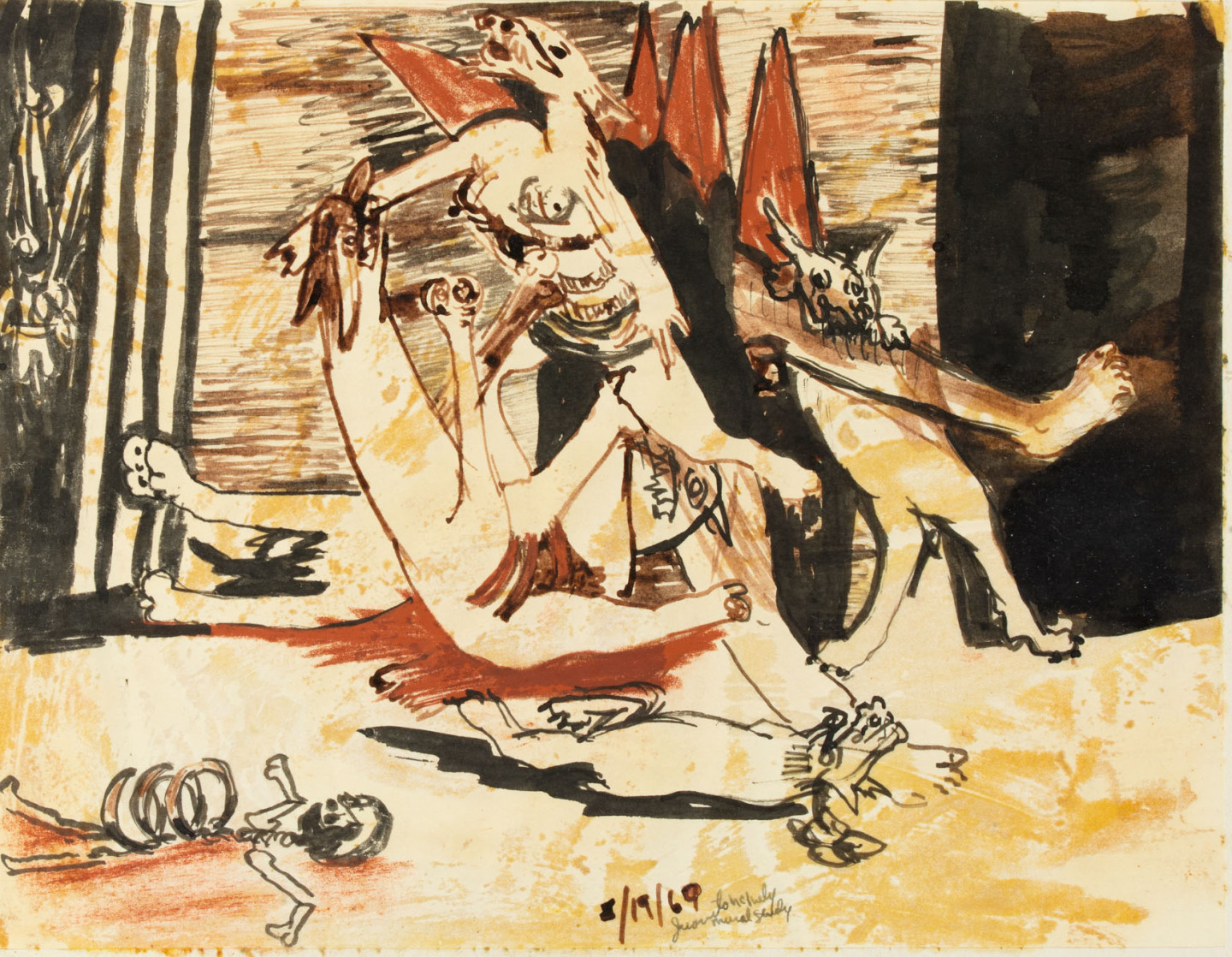 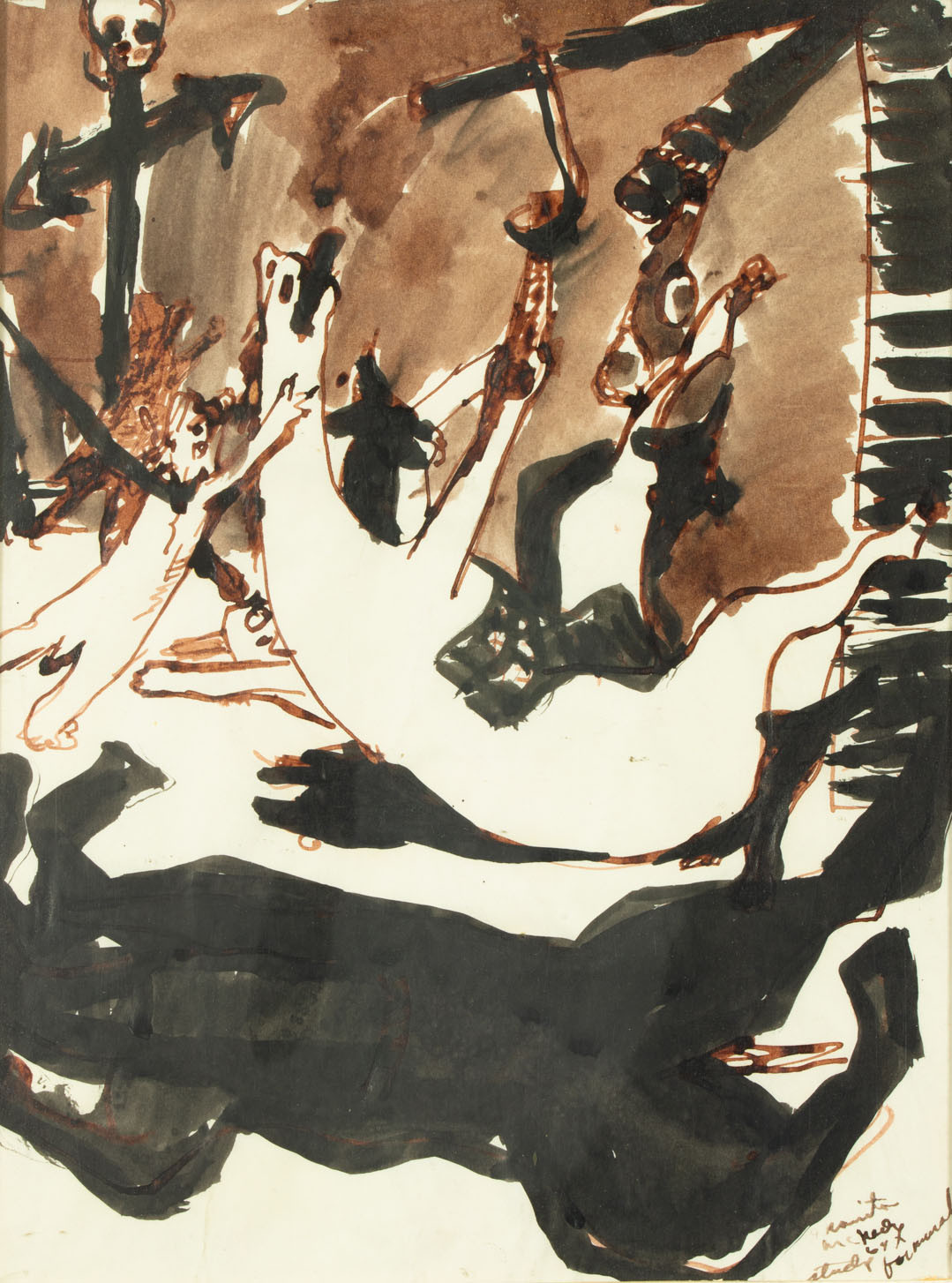 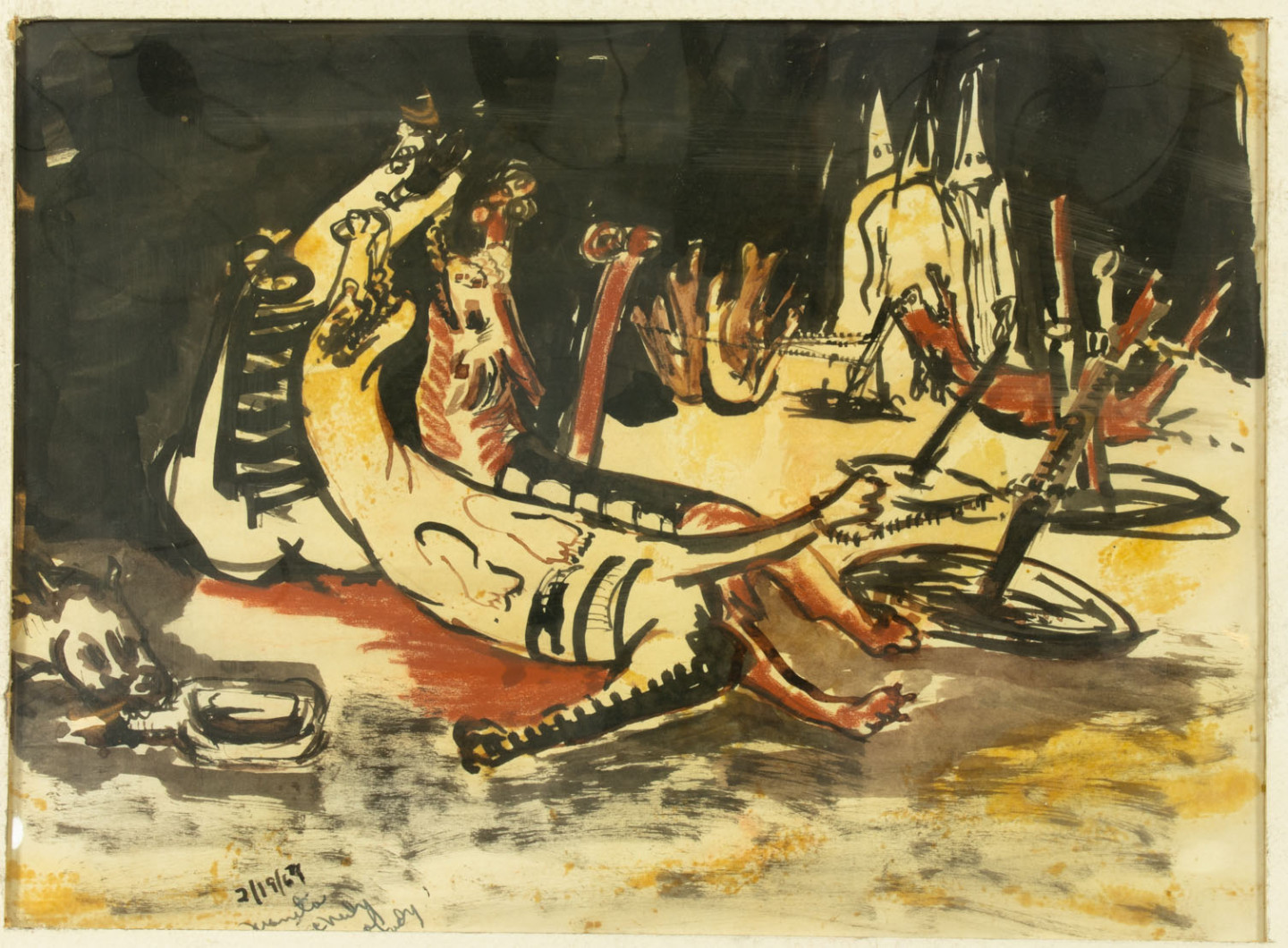 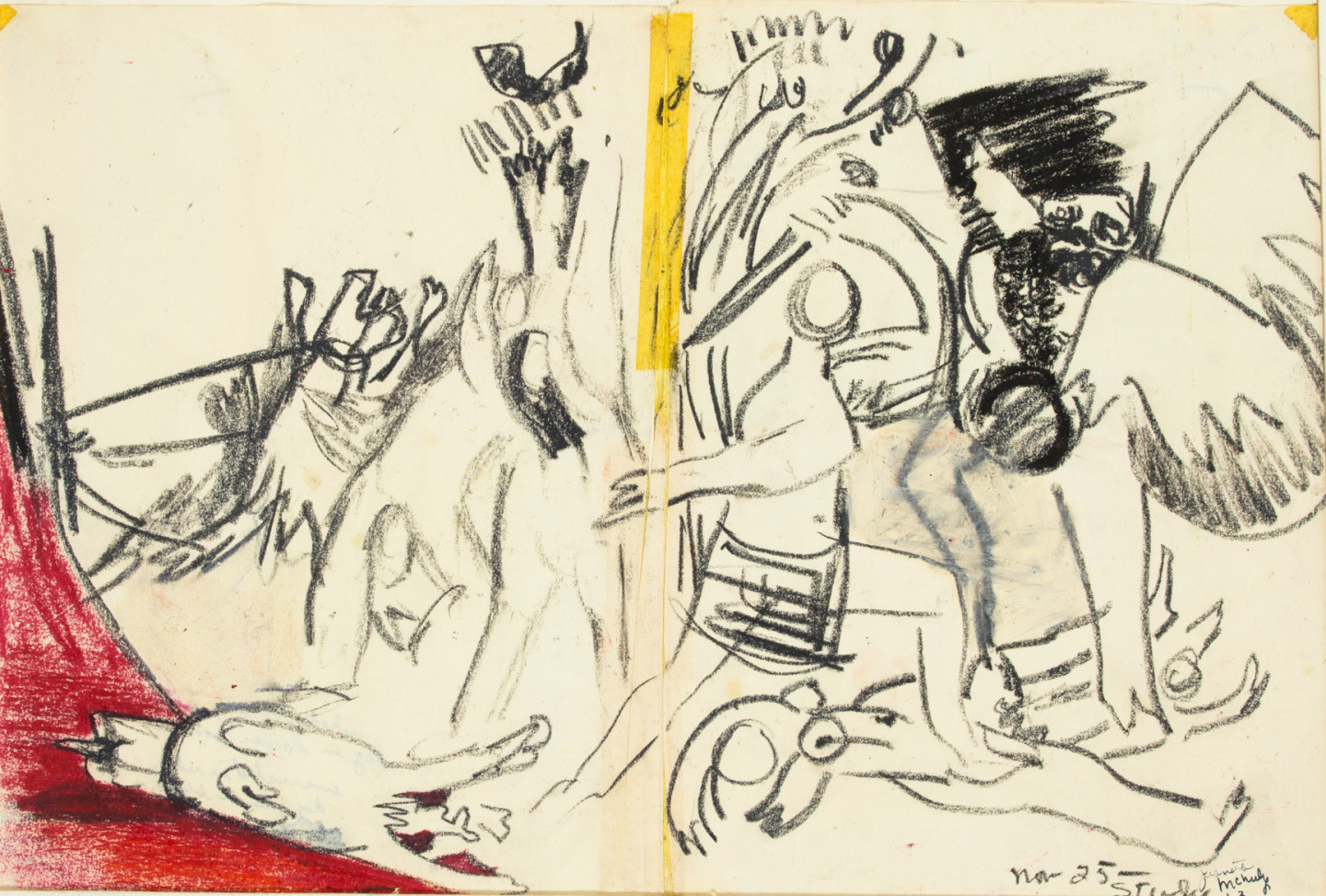 Juanita McNeely is renowned for her depiction of the extreme physicality and movement of the human figure within her paintings. McNeely first moved to New York City in 1967, where her figurative work became central to the development of feminist art and discourses. Prior to this, she was a graduate student at the Southern Illinois University in Carbondale, Illinois. This online presentation consists of a series of studies for what would have been her earliest major work from this time: a lost mural that was made 1963-64. Entitled Man’s Injustice to Man, it was intended for the Morris library at the Southern Illinois University, as reported by the student newspaper at the time and by the artist herself. What remains of the work is a series of paintings and sketches on paper, accompanied by progress photographs of McNeely working on the mural.

Depicting klan violence, the painting that these smaller works progressed was 9 by 12 feet and mounted as a mural. While the exact reason for the work’s disappearance remains unclear, resistance to it was almost certainly politically motivated. Although Southern Illinois University campuses were integrated at the time, Carbondale, along with most of the southern midwest, remained segregated until the 1964 Civil Rights Act was passed. The debate over whether to hang the mural ran concurrent to the national debate over civil rights in a segregated community. As in her major paintings that would follow, this selection of works on paper convey McNeely’s deep understanding of movement and expression. Key motifs that would later become central to her work appear here, including drastic use of light and shadow, experiments with dimensionality and visual framing devices, and the use of multiple panels to convey a visual narrative. If the work in question is truly lost, it serves as a case study in US censorship on an institutional level. Nevertheless, the works that remain speak volumes to McNeely’s personal and artistic reaction to and engagement with the political events of this time, and to the intensity of her concerns that would inform the entirety of her 60-year career to come.

McNeely (b. 1936, St. Louis, Missouri; lives and works in New York City) was the subject of Indomitable Spirit, a career survey curated by Susan Metrican at Brandeis University’s Women’s Study Research Center in 2014. McNeely was part of the Fight Censorship group founded in 1973 by Anita Steckel, alongside Judith Bernstein, Louise Bourgeois, Martha Edelheit, Joan Semmel, Hannah Wilke, and Eunice Golden, among others; as well as Women Artists in Revolution (W.A.R.), Redstockings, and other groups. McNeely has exhibited at venues including the Queens Museum, Art Institute of Chicago, Philadelphia Museum of Art, and Gemeentemuseum in The Hague, among others. McNeely received the Ellin P. Speyer Prize from the National Academy Museum, and honors from the Pollock-Krasner Foundation, the Gottlieb Foundation, and the New York State Council on the Arts. Her work is included in the collections of the Saint Louis Art Museum, the National Taiwan Museum of Fine Arts, and the Palacio de Bellas Artes in Mexico City, among others.

pencil and pastel on paper

ink on paper, mounted on board

ink and gouache on paper