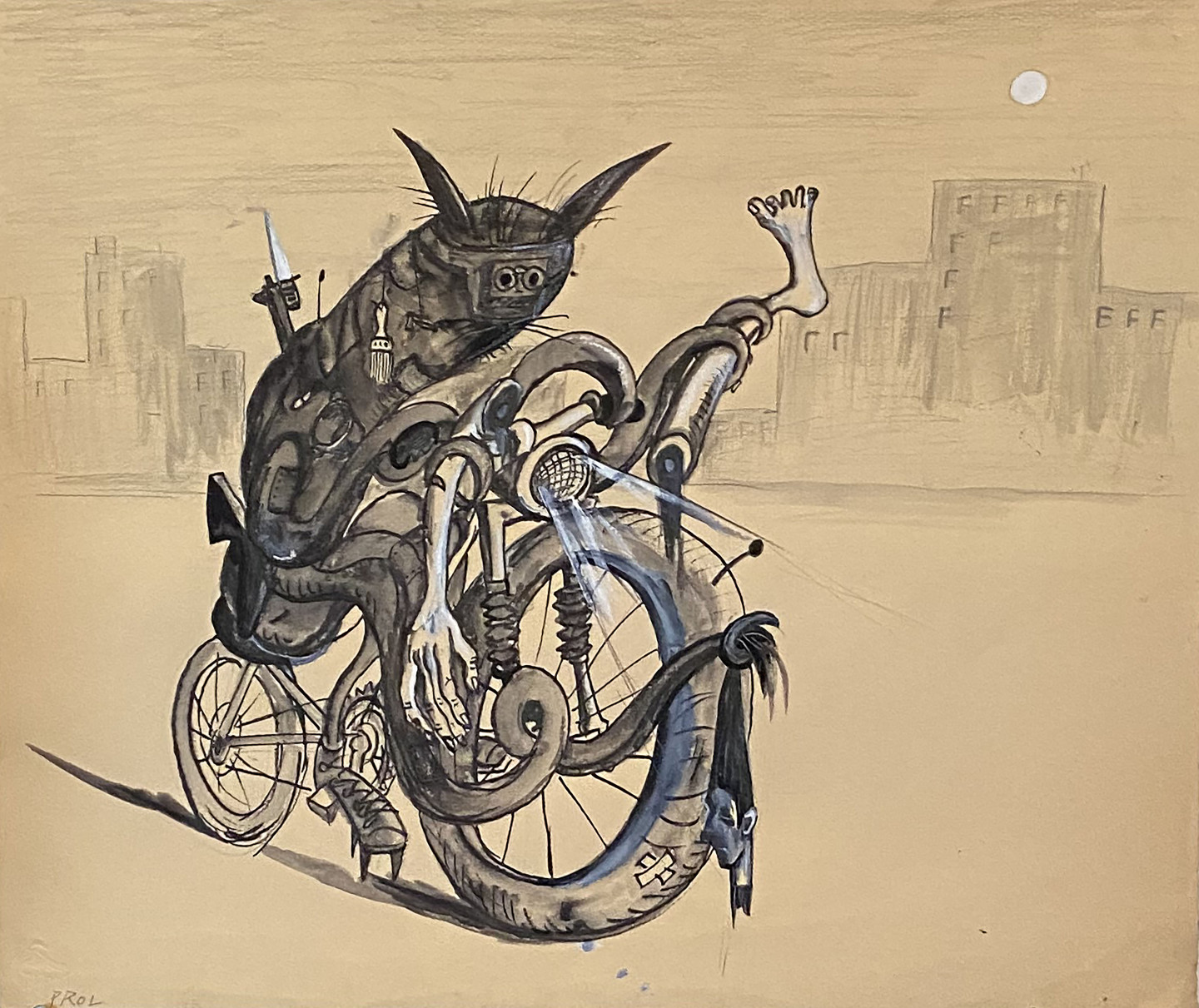 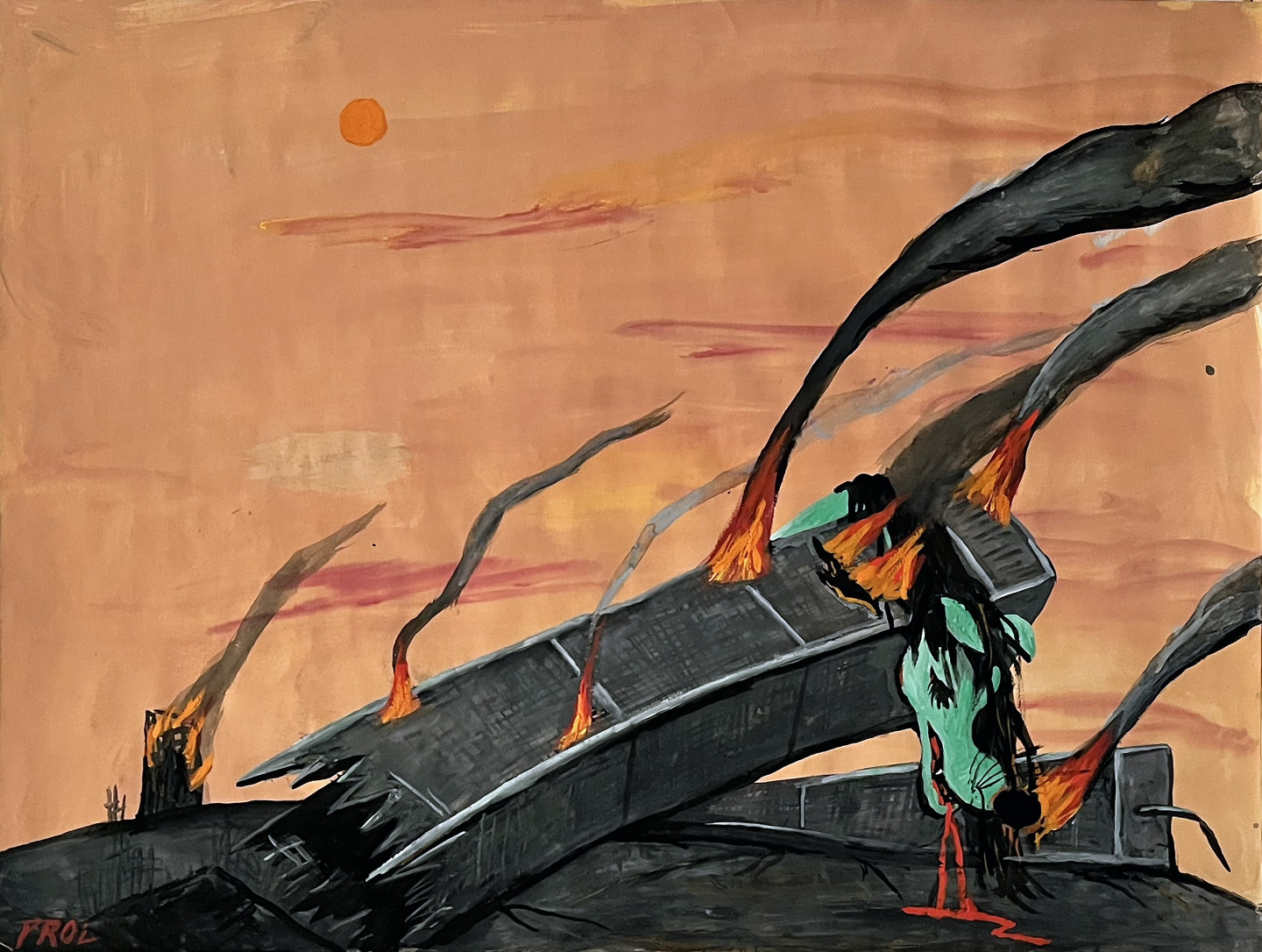 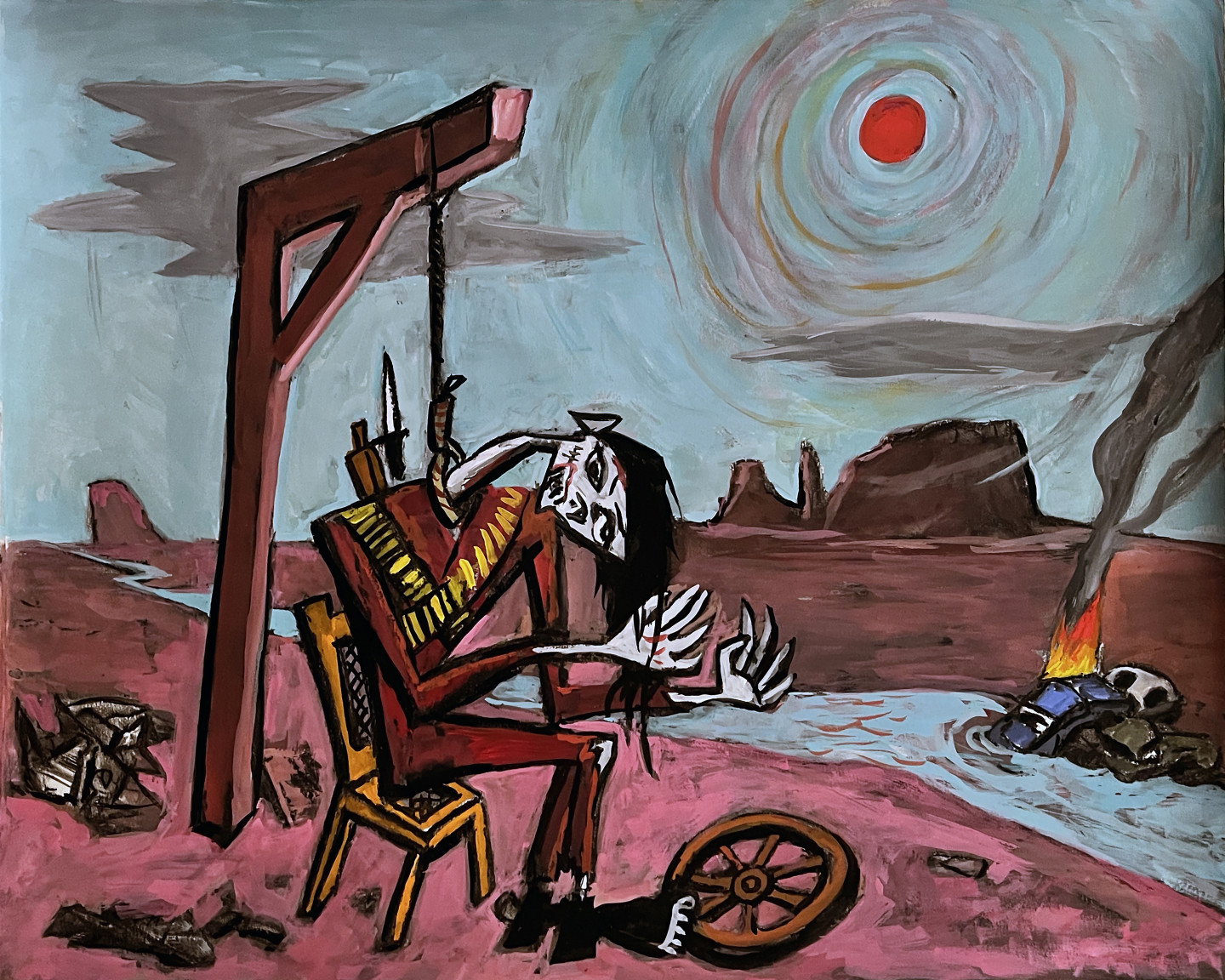 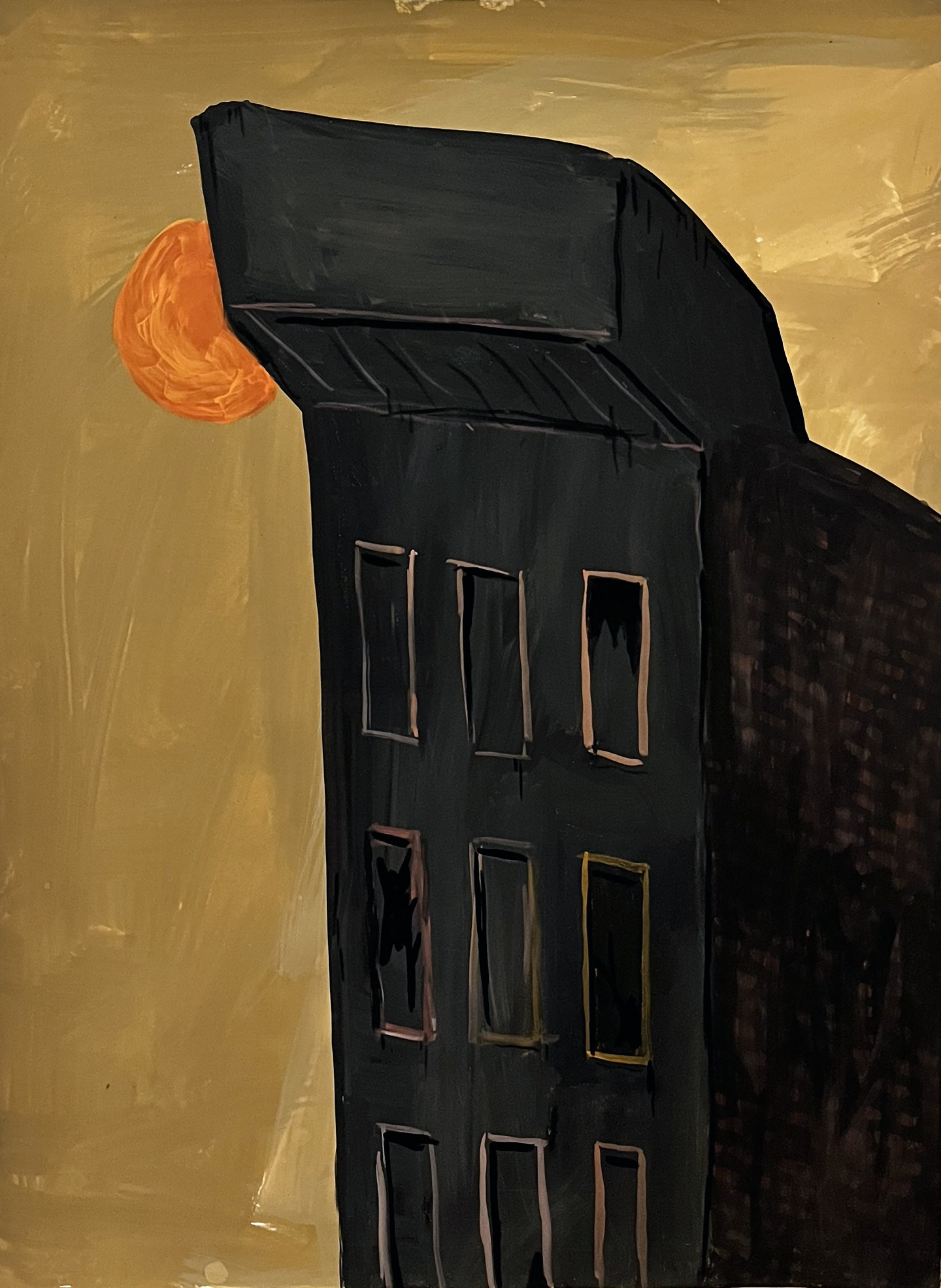 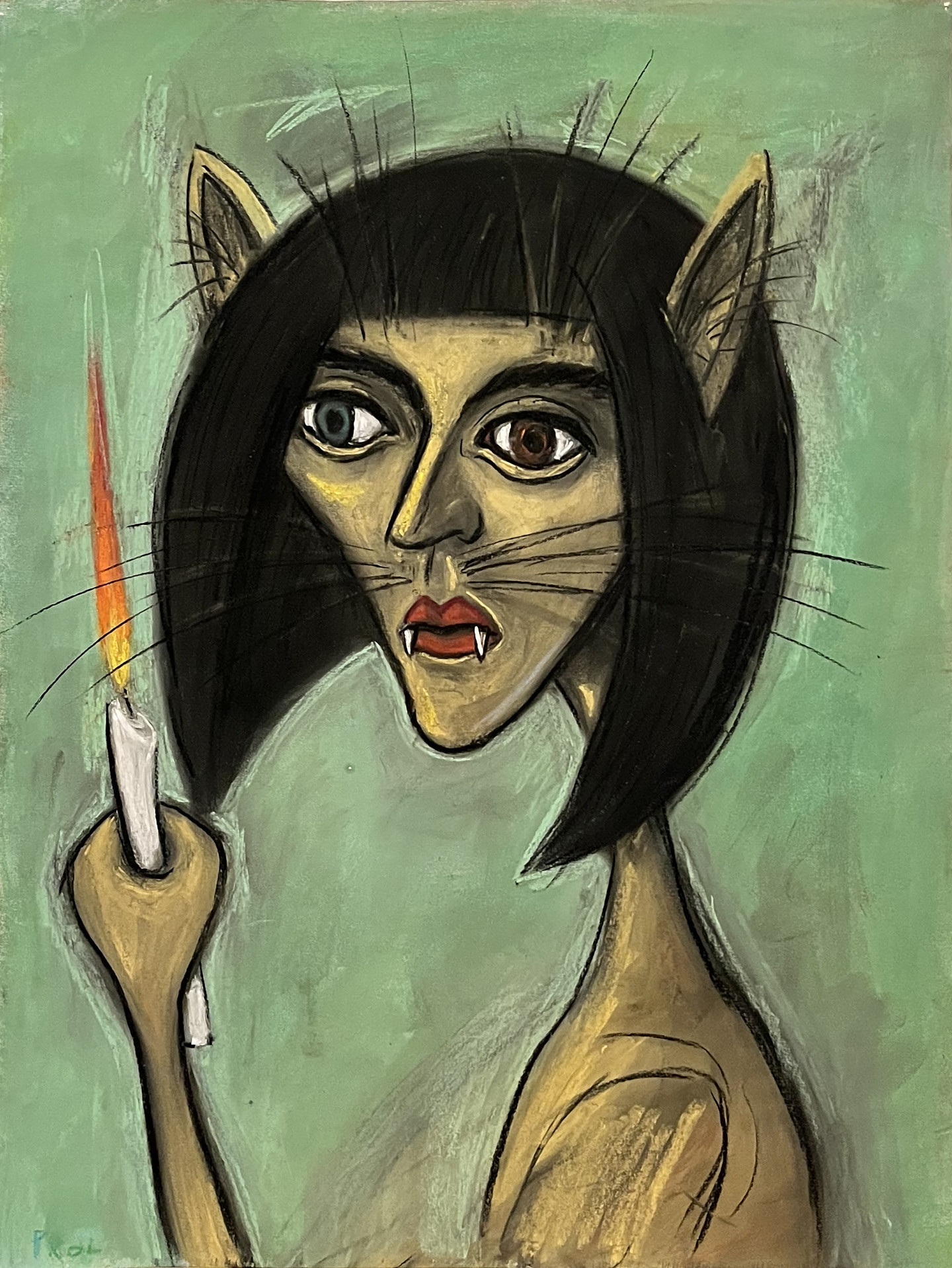 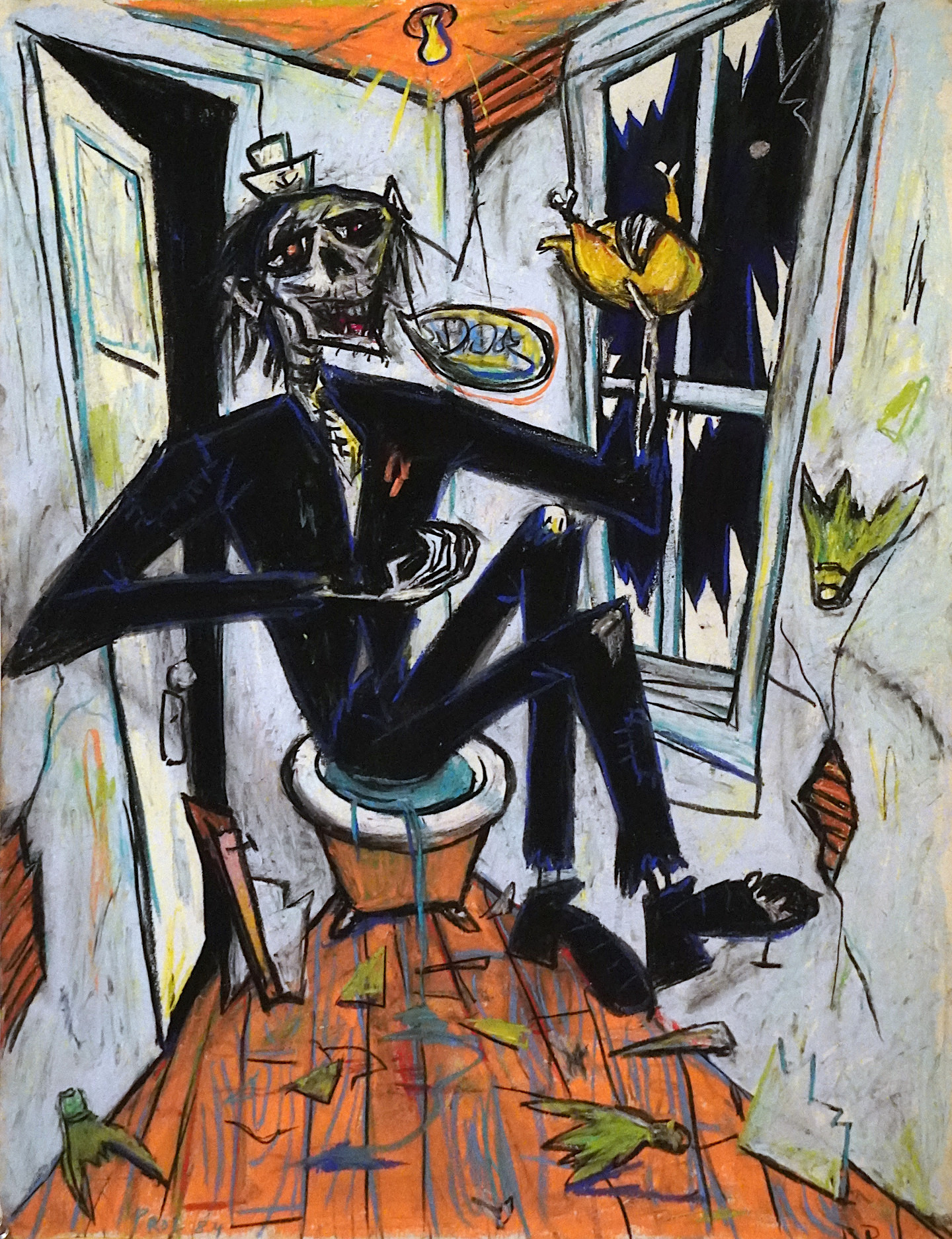 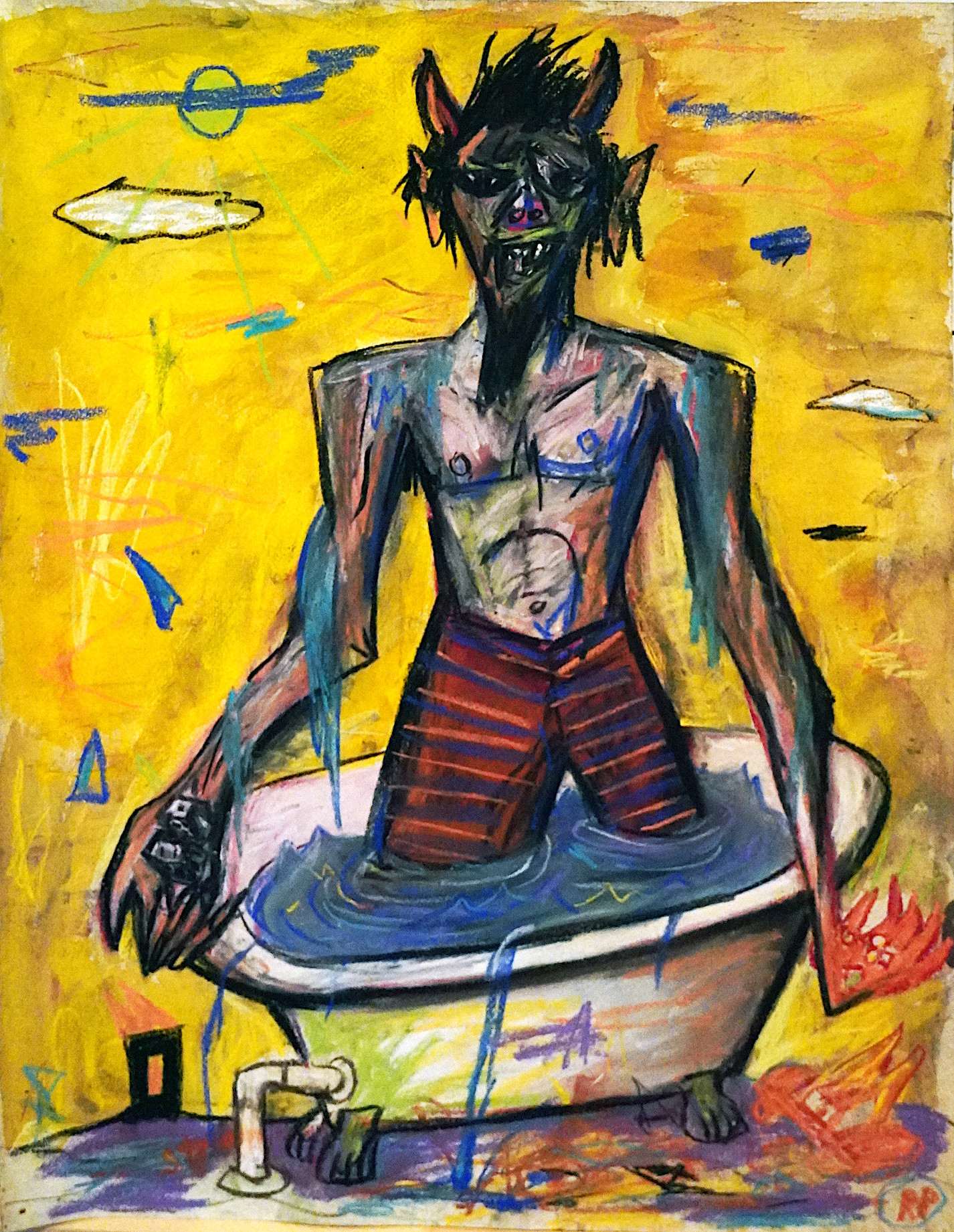 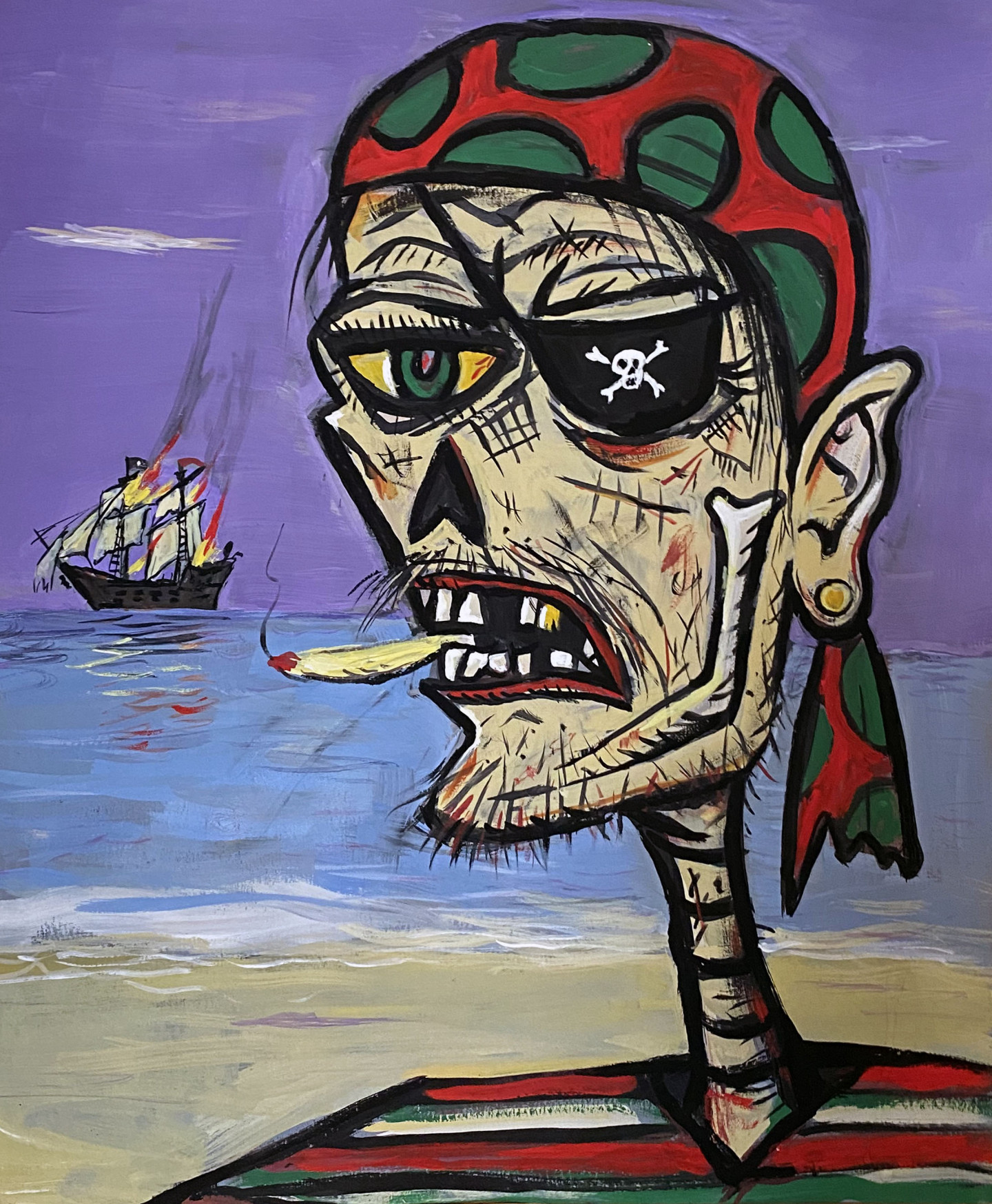 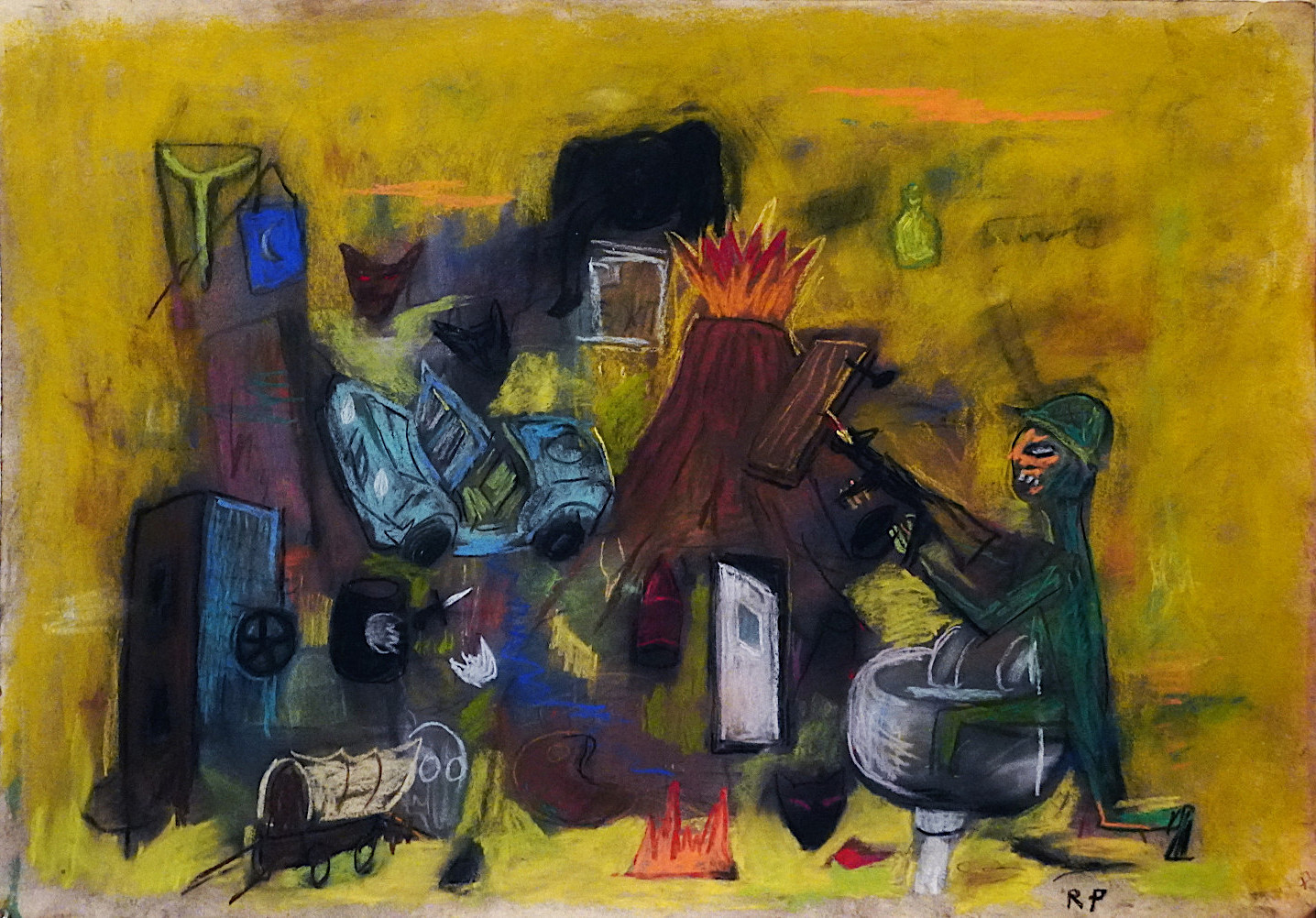 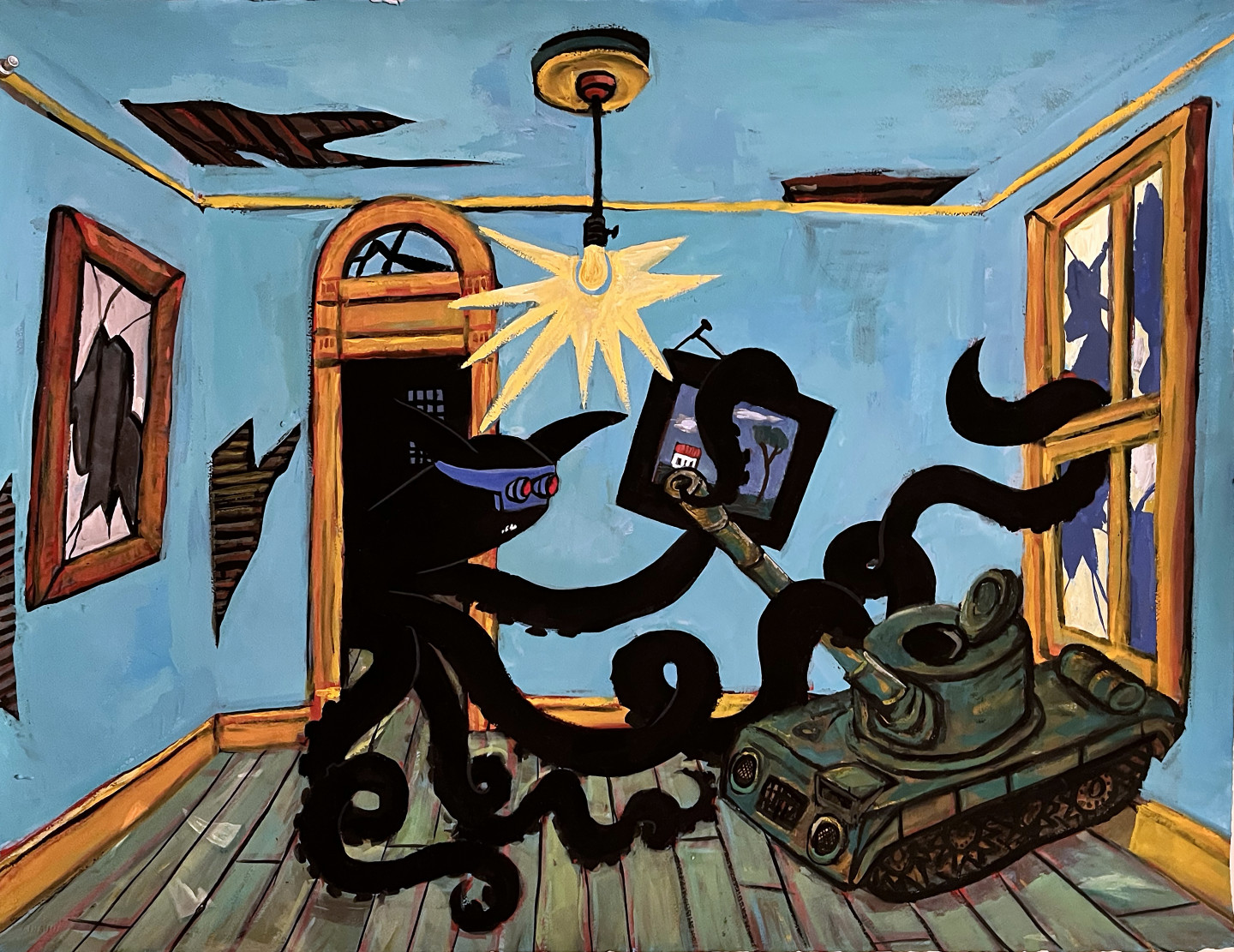 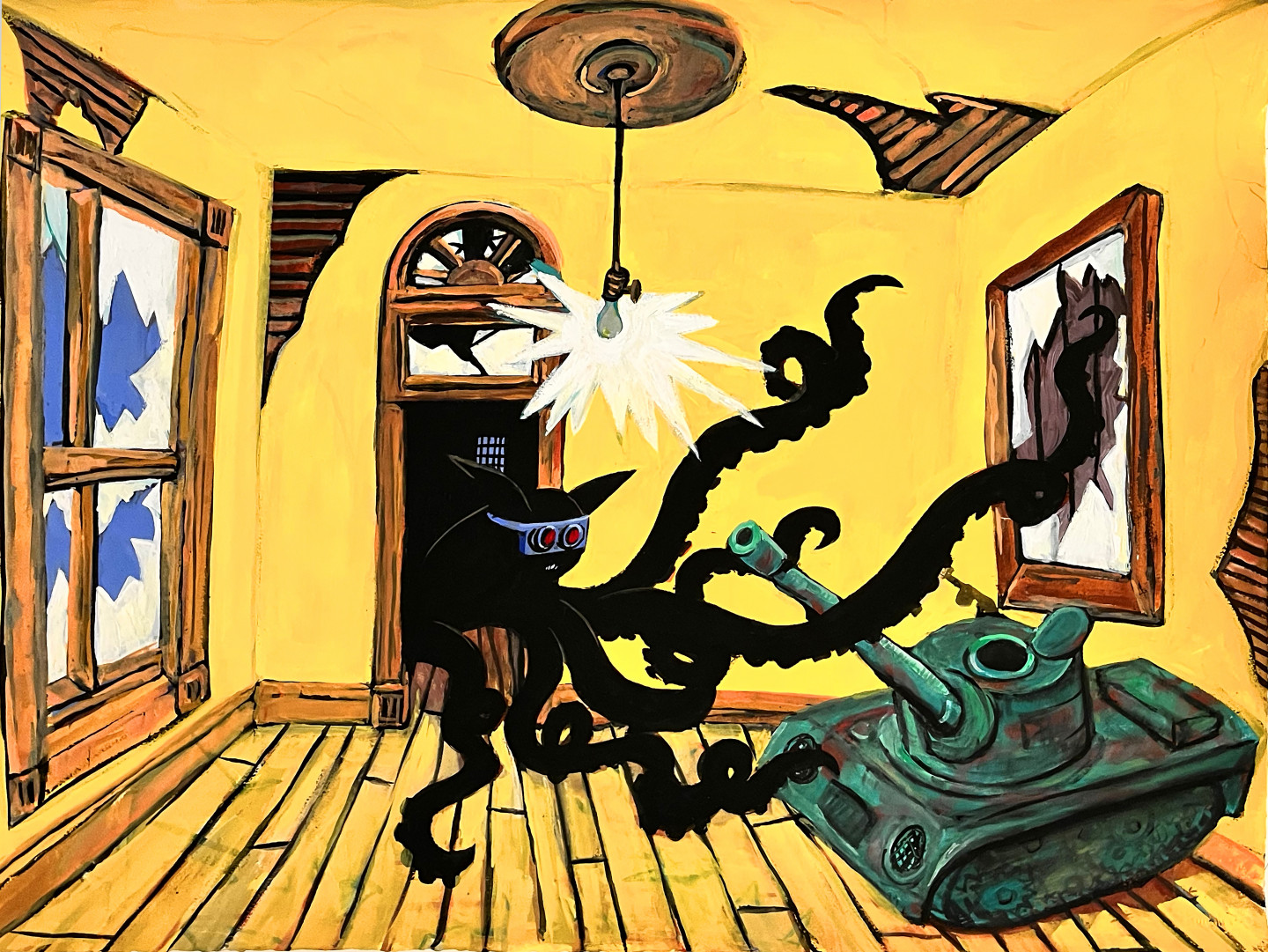 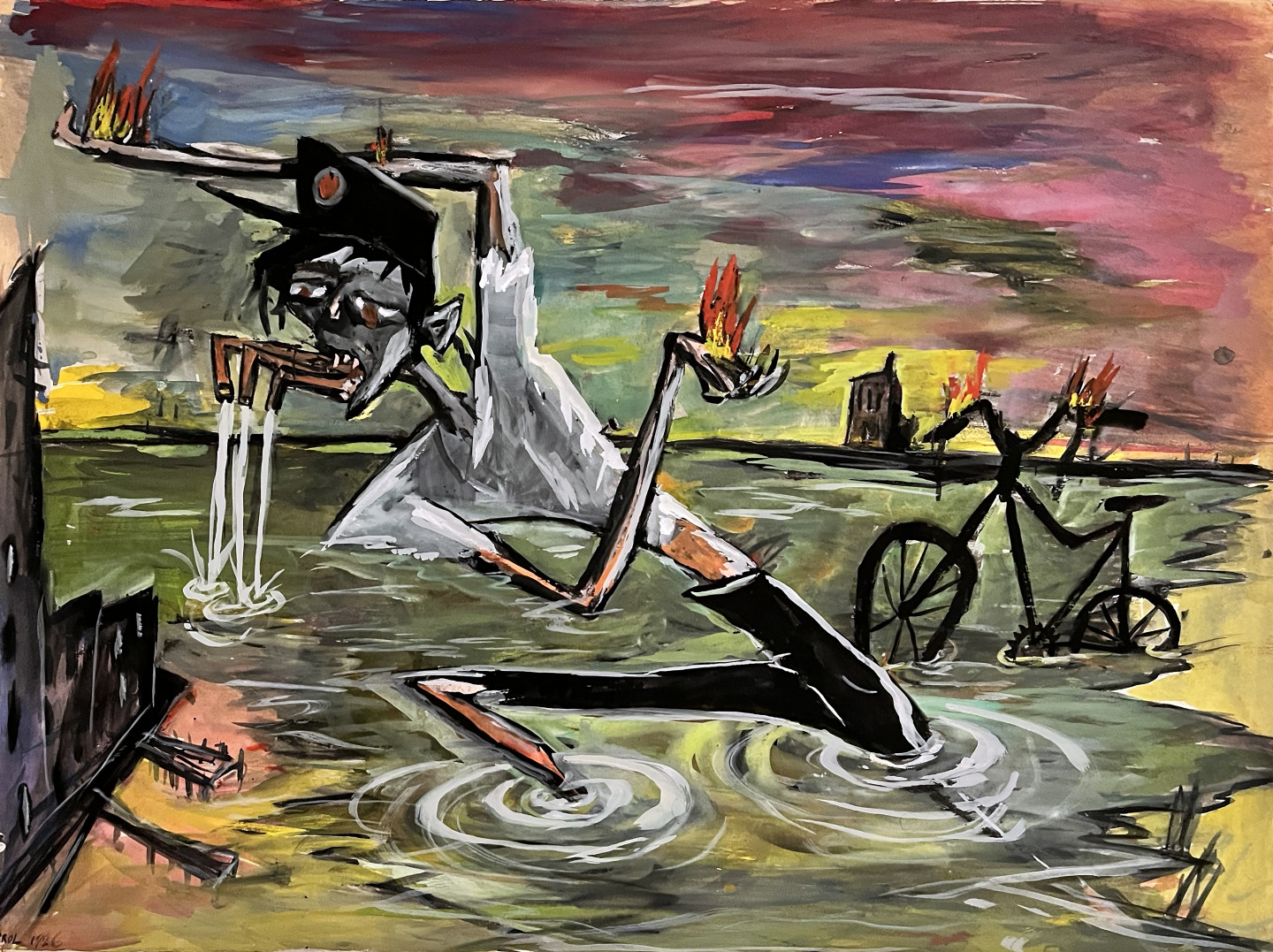 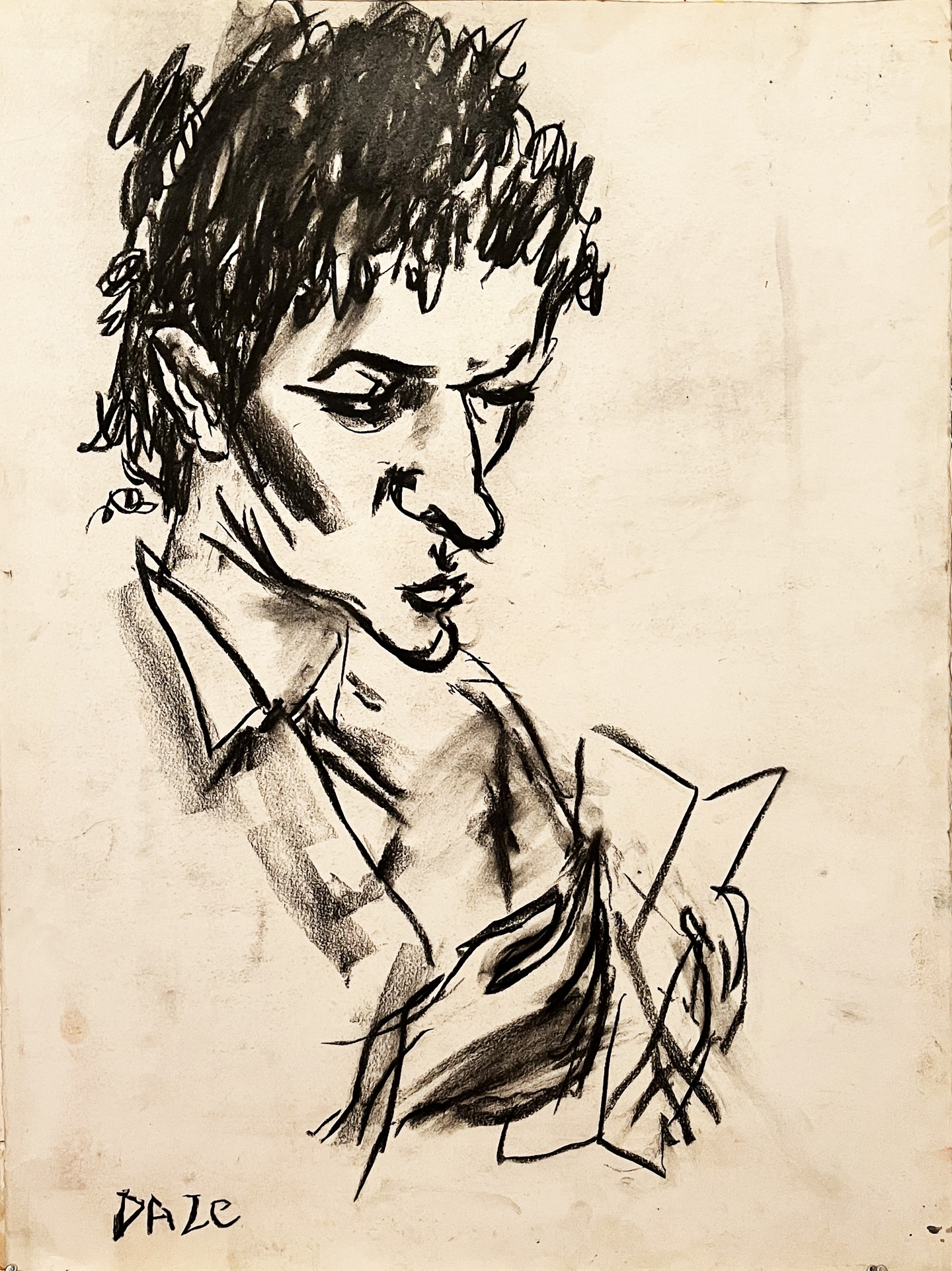 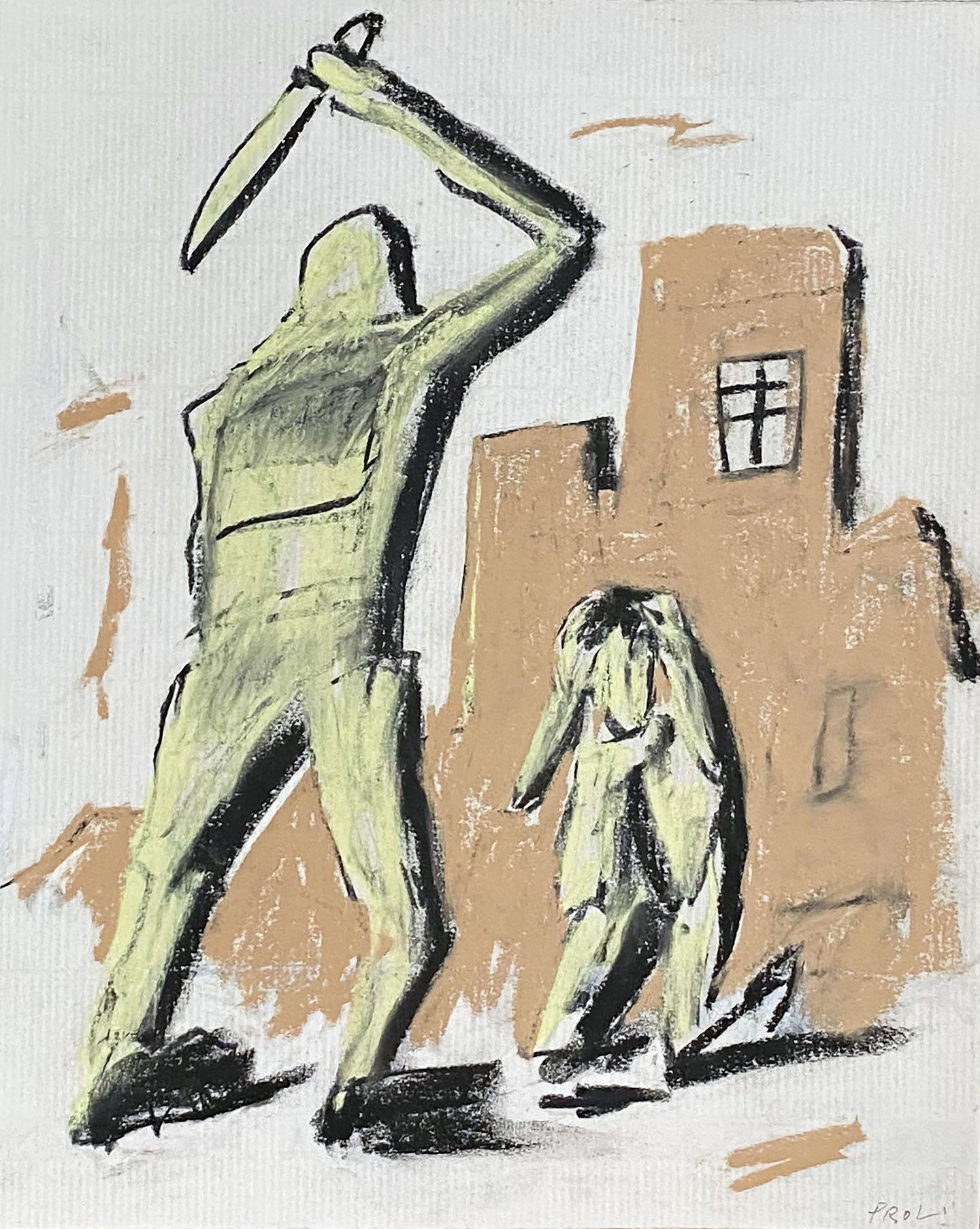 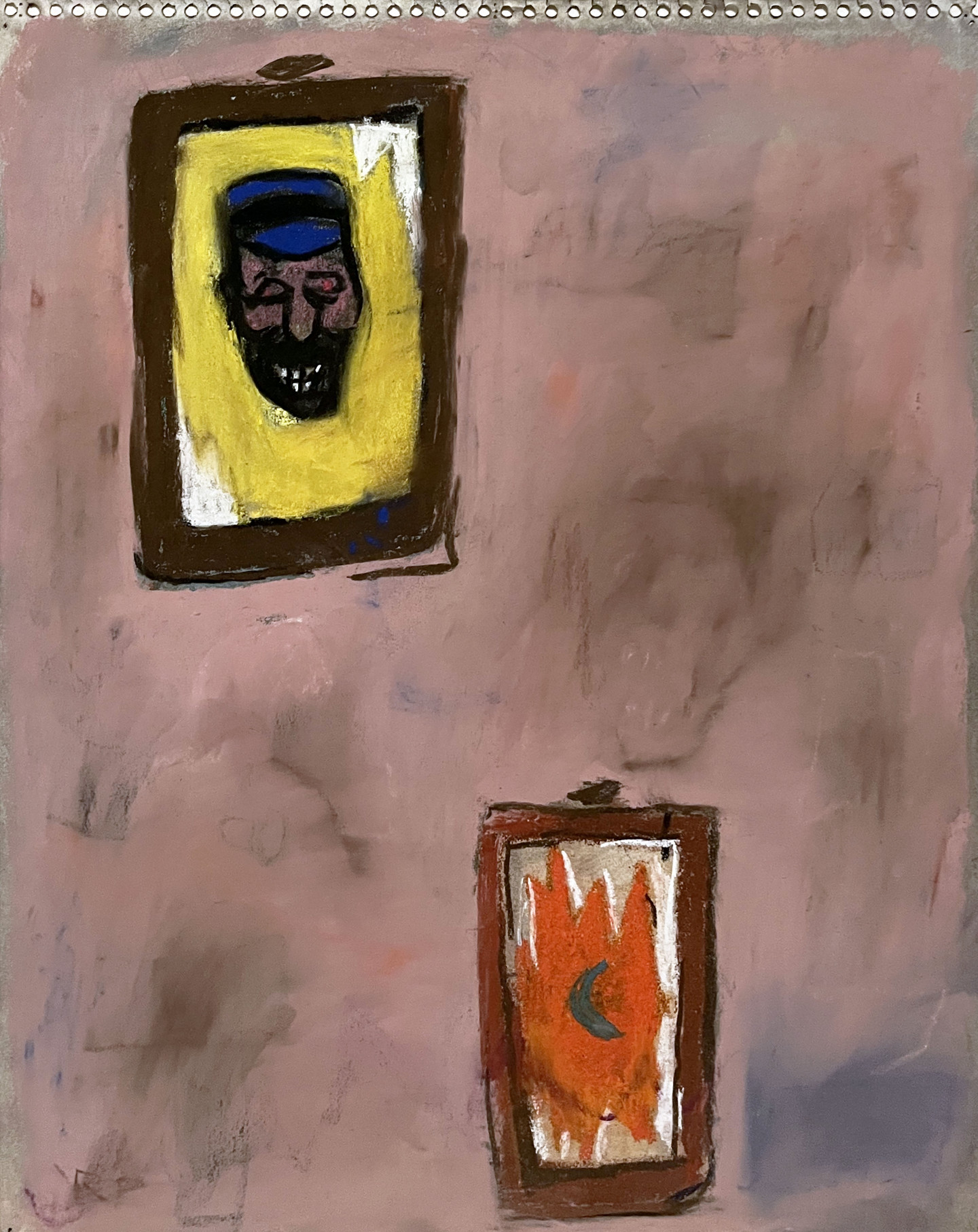 A selection of Rick Prol's works on paper, spanning the early 1980s until today, are on view concurrent to the artist's solo exhibition at the gallery, Empty City (February 19–March 26, 2022).

Empty City presents a new body of paintings by New York-based artist Rick Prol, made at the end of 2021 and moving into the beginning of this year. Numbered first in the series is an image of an empty train track suspended against the conjoined silhouette of buildings late at night. This scene is empty of people or vehicles—all is flattened into black or blue-grays save for a slice of white light in the corner a top-floor window. This scene could be set in New York City of decades earlier, when elevated tracks still ran through downtown—or today, reminiscent of the zone that you sink into crossing the Williamsburg Bridge on the JMZ, looking into Brooklyn and back at the cityscape across the river. This first work is the only one visibly void of people, although their presence fills the air—stir crazy, asleep, or simply not there. Across the remaining works, figures appear bent, crouching, human, and animal.

Rick Prol first entered the city’s artistic milieu at the very end of the 1970s, set against the Lower East Side’s urban landscape characterized by desolation, emptiness, and the daily violence (and fear of it) that filled it. His works reflected this psychic space, populated by twisting figures and animals that seemed to depict its visual scenes as much as the darkened psychological corners of it. Although Prol’s works communicate via association—using stand ins that articulate sensation rather than necessarily representing the artist or any particular person per se—the Empty City works do in large part pertain to the city’s deserted landscape at the onset of the pandemic. There and then, horror lingered at four in afternoon, looking up and down emptied streets and avenues at an absolutely strange, sad, and beautiful view. Prol’s works of the 1980s have been framed in relation to that decade’s broken windows theory, and a curious timeline stretches from then into the present, now seeming to form a full circle with this exhibition.

Today we are located somewhere beyond the empty moment. Burning buildings, cracked windows, addiction crises, and physical and emotional violence again intensify in the streets in the aftermath of the our losses. To those who have been here before, the city is strangely familiar to that earlier time—and in this regard, we are in fact located in what remains from each of those desolate and brilliant moments. By their own chain of associations Prol’s works speak to this continuation, too. At the same time, it has also always been the case that his works emerge most directly from the hauntings of personal childhood visions and experiences that have stuck as strongly as that city view, and which continue to contort. At the core, the immediacy and recognizability of Prol’s work is necessarily held together in tension with a certain mystery and ambiguity. And so, while the animals in his paintings might most literally signify animality, more relevant here is their ultimate unknowability to us as humans.

If Prol’s scenes and figures appear destitute, down and out, stabbed in their necks and backs, and twisted over, what’s remarkable about them is their eternal resilience. A buoyancy lives in the inherent humor of their expressions. But this isn’t the feeling of a deadened nerve in the face of endless struggle. It all hurts: the knife really pierces and the body bleeds, cats make love and get sold and go limp, and somebody else struggle to make a dime off of them. Our psychic turbulence is very much alive, as are the tangled shapes of our sincere hope and adaptations. Prol’s works are sensitive and present to these insides and their surrounds.

Rick Prol was born in 1956 in New York, where he lives and works. He graduated from Cooper Union in 1980. Recent surveys of his work have been presented at the Ohio State University, Columbus, OH and The Hudson Valley Center for Contemporary Art, Peekskill, NY. He has presented solo exhibitions with Hal Bromm, B-Side Gallery, Willoughby Sharp, and Andrew Kreps in New York; Barbara Farber in Amsterdam; and Leeahn Gallery in South Korea; and has been included in group exhibitions at Artists Space and PS1, among others. Prol’s work is included in the collections of the Museum of Modern Art, Guggenheim Museum, Stedelijk Museum, Museum of Contemporary Art Chicago, Hirschhorn Museum and Sculpture Garden, The Aldrich Contemporary Art Museum, Holocaust Museum, and Smithsonian Libraries.

Pastel and collage on paper
Signed and dated recto

Pastel and watercolor on paper
Signed recto and verso