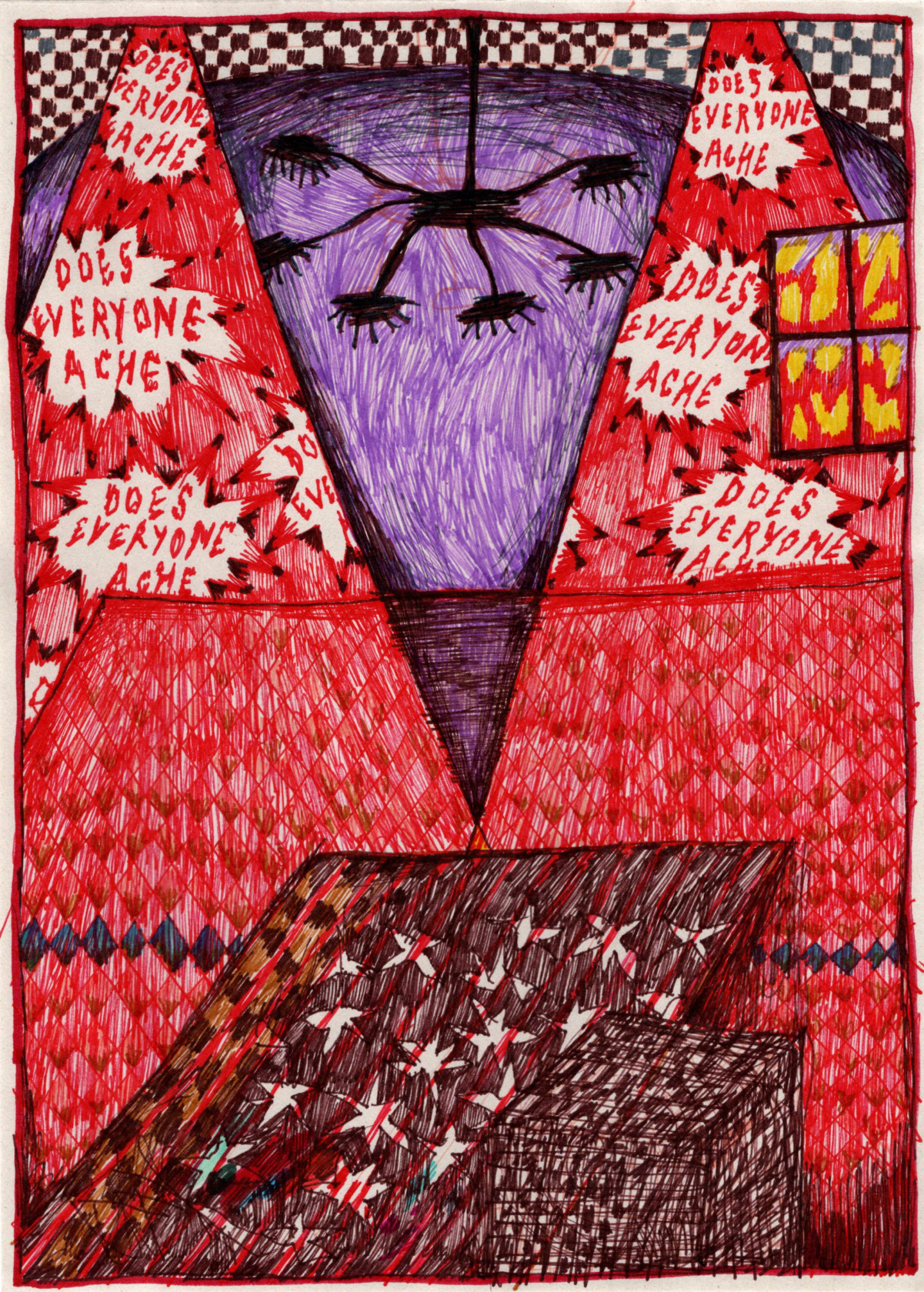 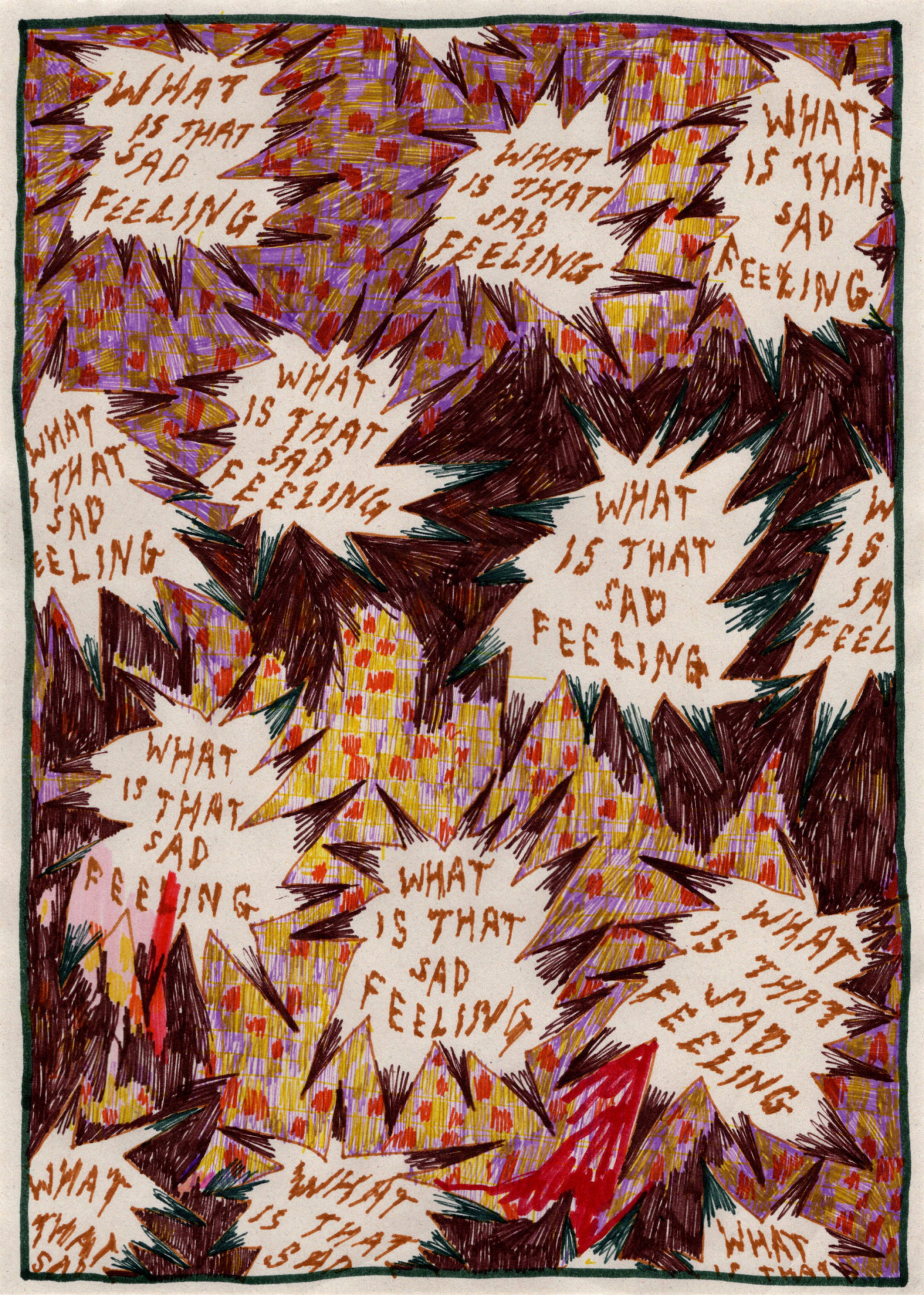 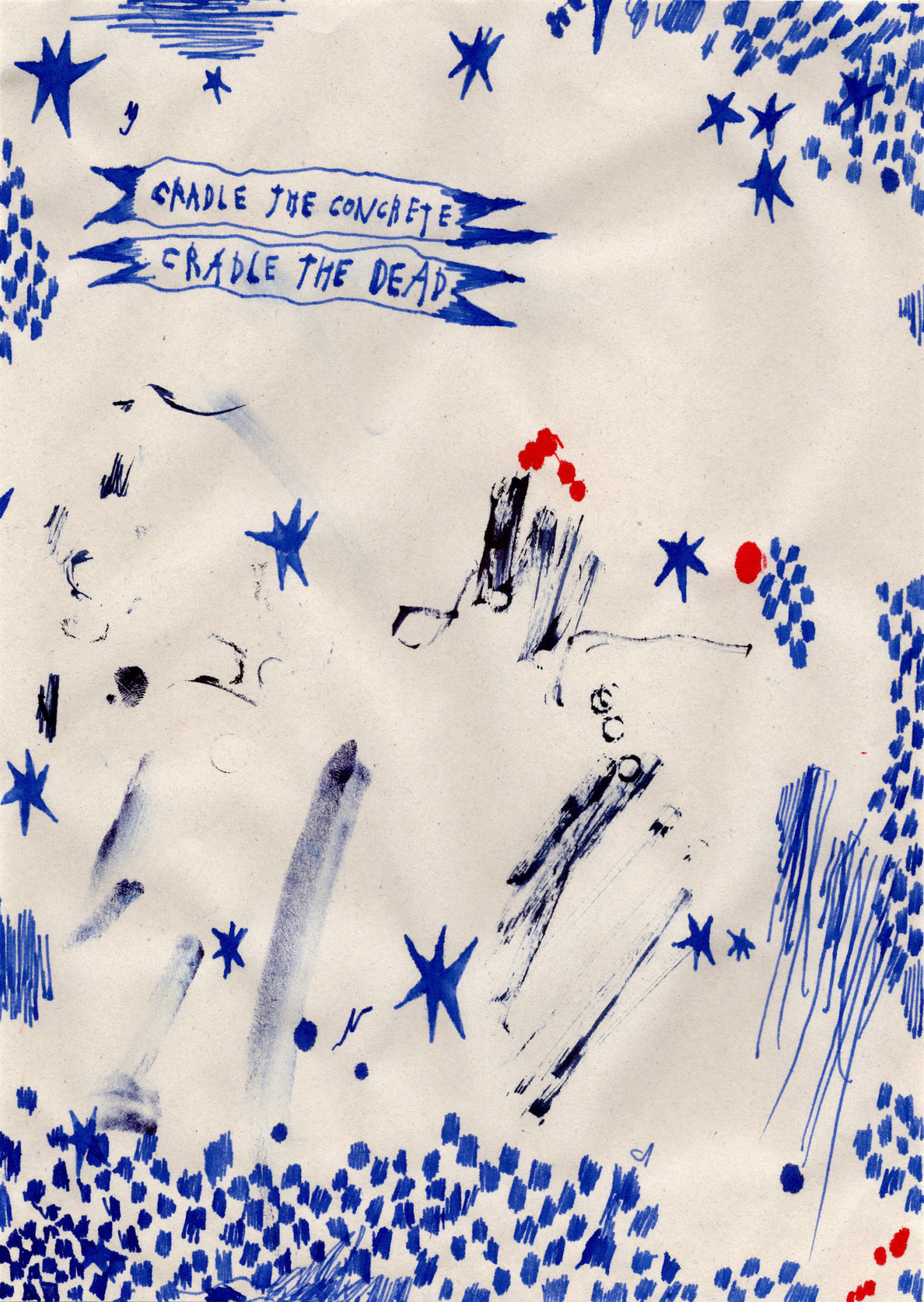 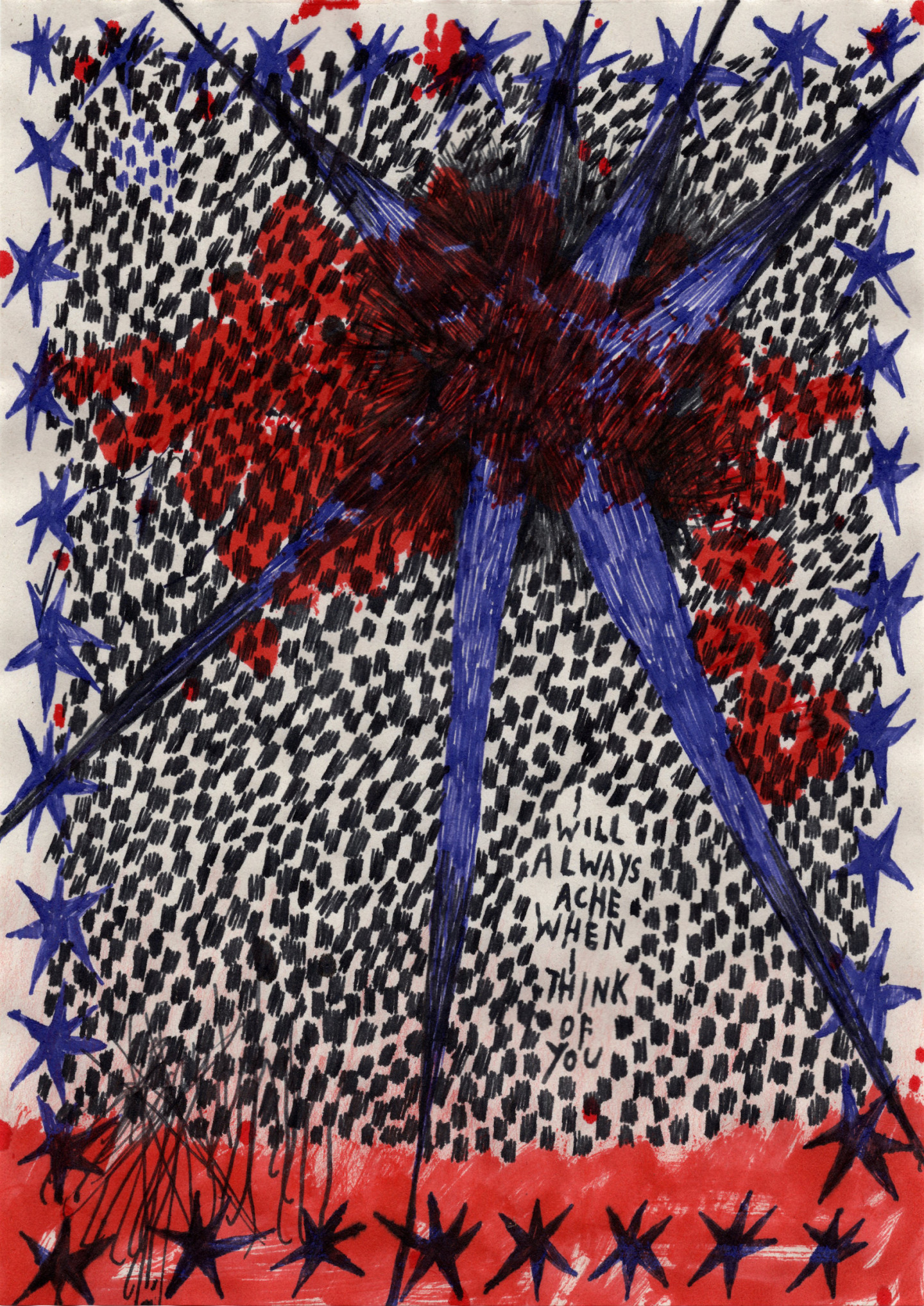 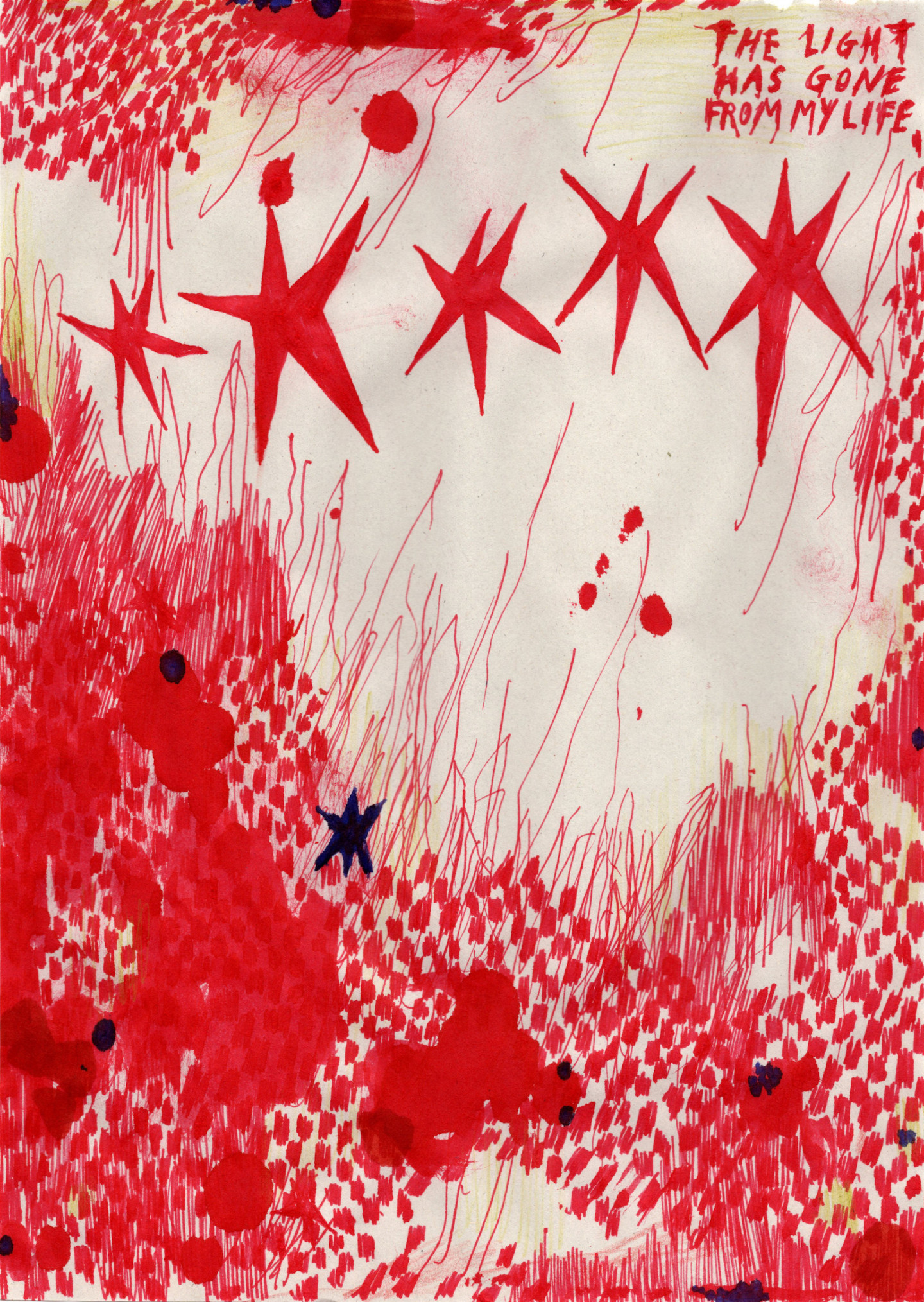 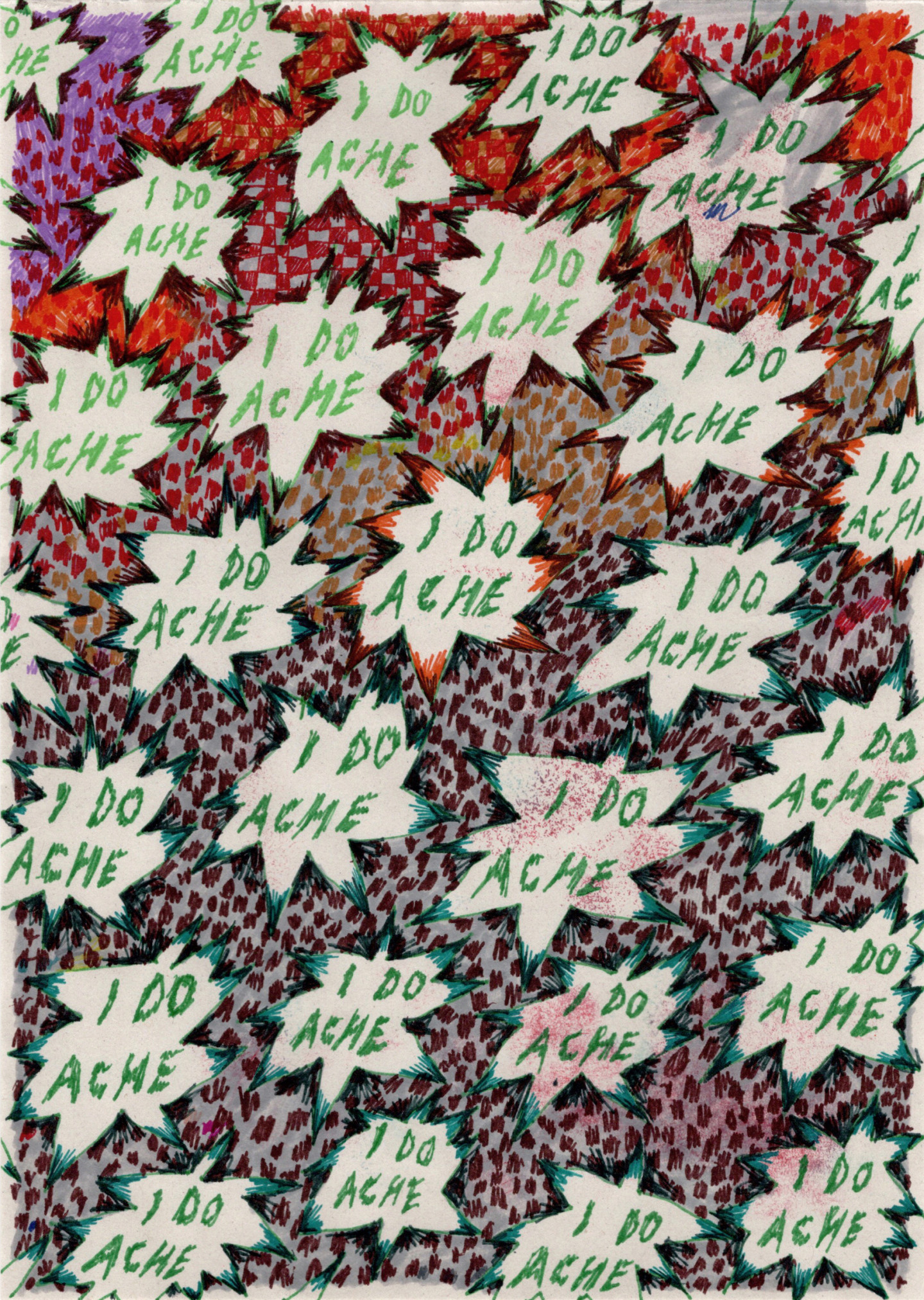 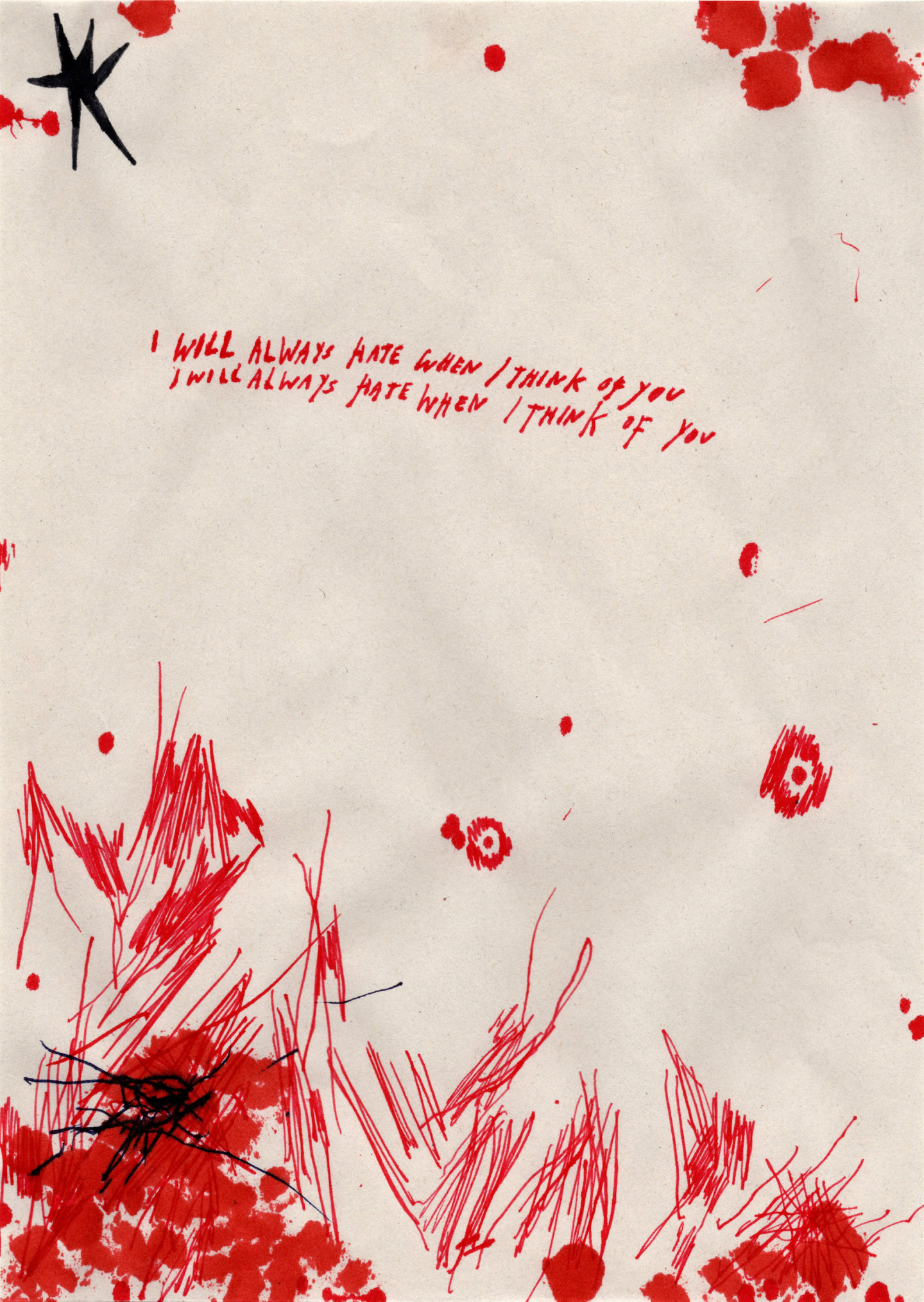 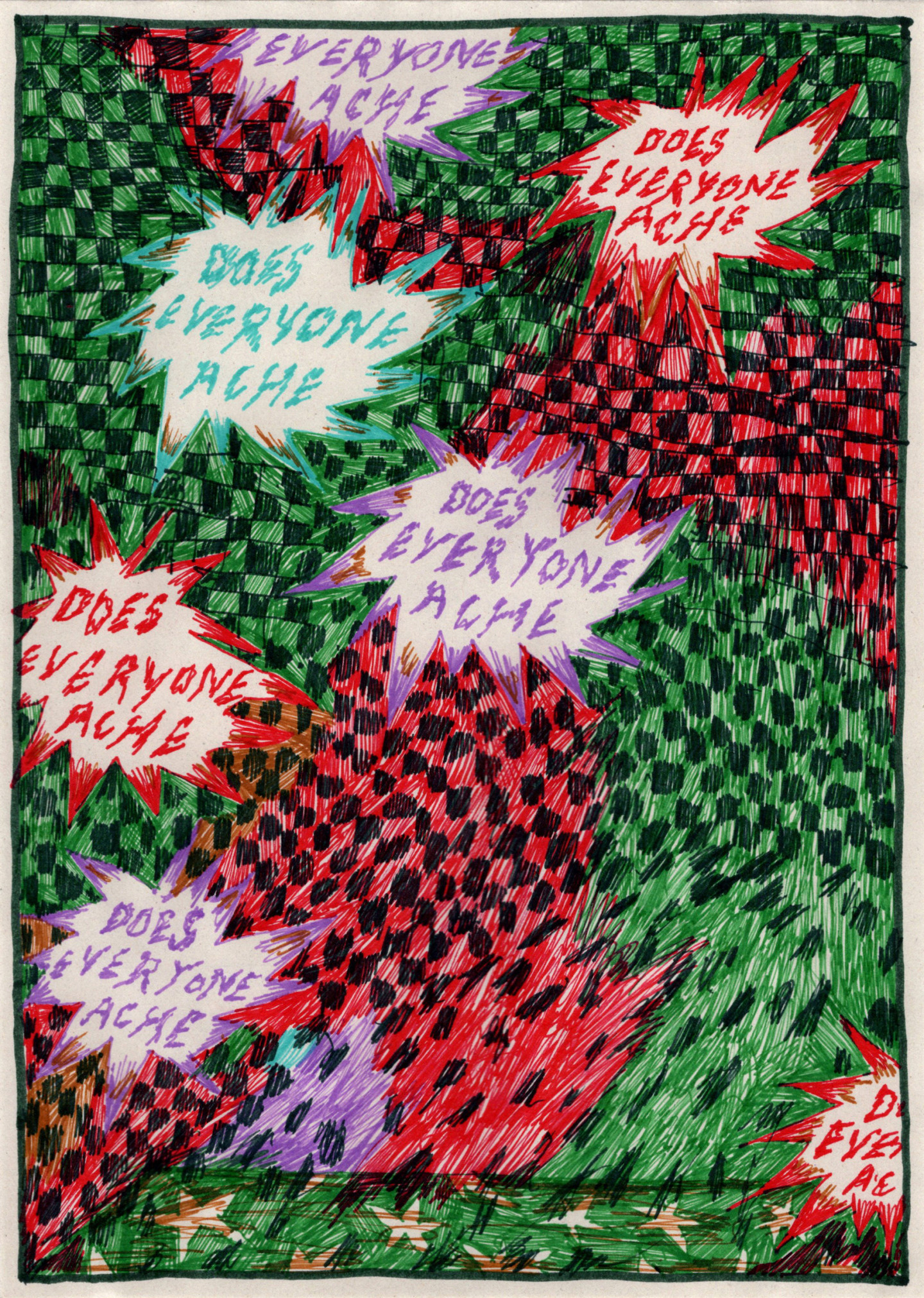 Daisy Parris talks to Sim Smith ahead of their show of works on paper, Concrete Saviour, which runs concurrently with The Warm Glow, an exhibition of paintings at the gallery. Discussing the intense nature of making these intimate works, their emotional potency, and the freedom they offer, Parris explains their interest in domestic space and their love of punk music, writing, and poetry.

Sim Smith: It’s great to be talking with you ahead of your show at James Fuentes later this month. The works on paper form such an integral part of your practice. When we first met I was really interested to find out how you make them. Mainly because I hadn’t expected them to be made in intense bursts so infrequently throughout the year. Can you talk a bit about how you approach making the works on paper?

Daisy Parris: I only really make them when I’m not able to paint—if I don’t have access to my studio while I’m traveling, when I have limited means, or when I feel out of place. They only require a pen and my imagination. I don’t tend to draw and paint side by side, but the two are very influenced by each other. I write notes or make marks on paper and canvas constantly throughout the year. Some of these ‘scraps’ of paper turn into more detailed drawings at a later date, while the scraps of canvas end up in paintings.

Smith: Do you find the emotional experience of making the works on paper different to making the paintings on canvas?

Parris: Both are extremely intense and exhausting. Perhaps that’s why I can never paint and make works on paper at the same time—my body and mind wouldn’t have the strength. The works on paper are so intense but in an internal way. I don’t know why but they’re the most painful to make, they make me very tired, mentally and physically. In hindsight, I guess it’s because they’re so detailed. In my head they’re just mindless doodles but the process is actually very complex and requires great attention to detail. The works on canvas are also very physical and intense but in an external way because I use my body more to paint. It’s kind of new to me to sit still and concentrate on detailed work for hours at a time. Although both the works on paper and canvas are both concerned with emotion, composition, color, and texture, the process of exploring these themes is completely opposite.

Smith: Do you feel that the works on paper can do things that larger works can’t? We speak a lot about intimacy in your work in general. Do these works on paper afford you a greater intimacy?

Parris: The works on paper give me a freedom in the sense that when I make them, I imagine them to be part of a journal, like something I would make when I was a teenager that no one would see. They let me indulge in utter angst, anxiety, and emotion and are quite unapologetic as it’s just a piece of paper and I have nothing to lose. They’re kind of secret; you almost have to discover them. I love that feeling of turning a page in an artist’s journal and not knowing what’s going to come next, it’s pure magic. The canvases are so in your face. There’s no hiding them. They’re intimate in a different way; you can still go up close, get lost in them and be on your own with them. I also feel like you can see the whole of a work on paper all at once, whereas a large painting is almost beyond my comprehension at first glance.

Smith: Can you talk more about the interior spaces within the drawings?

Parris: Interiors are something I never thought I would have the skill to draw or would be interested in drawing but they’ve slowly crept into my works on paper. They mostly happen when I feel trapped or have bad domestic energy around me. I’m very interested in the absence of humans in the domestic space. A lot of the time I use the star as a symbol in the place of humans. I’m interested in capturing the feeling of being scared to turn a corner or not knowing what’s behind a door, as well as what it means to live in fear. As a kid, my anxious mind ran wild, and I’d imagine things lurking in domestic spaces. The spaces I draw are rooted in the familiar but I’m also a day dreamer, so they end up being otherworldly.

Smith: And the looser, more text-based works? There are set phrases or mantras that crop up again and again—are you happy to talk about where they come from? I know writing and poetry are incredibly important to you.

Parris: I love writing and poetry and making observations. I love the way words look written down and the way they feel in my mouth when spoken. I don’t know much about poetry, in the classical or academic sense, but I know what I feel and what I respond to. A lot of my interest in the rhythm of words comes from listening to punk music. A lot of punk was effectively spoken word. People like Joe Strummer, John Cooper Clarke, or Young Marble Giants really influenced me and taught me a lot about rhythm in words. Take ’Brand New Life’ or 'Final Day' by Young Marble Giants for example: the songs are completely stripped bare, the lyrics are domestic, mundane almost, but so vulnerable and tender while also being political. I guess that ties it into my interest in the domestic once again. Just like what I paint, I want what I write to come from the guts, from the core of being human.

Smith: Is there anything you’d like to add about this body of work?

Parris: This series of work was made over a few years, the common thread being the star, whether it’s floating quietly on its own, or it’s reaching out to touch everything in sight. I never thought paintings or drawings could be just all text, or domestic and mundane and yet still vulnerable. I find it fascinating to ask people to read a painting or a drawing, to slow down, make domestic observations and meditate on what words can mean. I like obsessively repeating things. Sometimes it’s out of my control but mostly it allows me to drill into what words actually mean. Through repetition comes new rhythms and further understanding.

Daisy Parris (b. 1993, Kent, UK) lives and works in London. They received a BA (Hons) Fine Art from Goldsmiths University, London. Recent solo exhibitions include I see you in everyone I love (2022) and Star-Studded Canopy (2020) at Sim Smith, London; and Pain For Home (2021) at M+B, Los Angeles. Group exhibitions include Talk Like Strangers, with Nico Stone, Sebastian Helling, and Jesse Littlefield at Part 2 Gallery, Oakland, CA; What Kind Of Spirit Is This? at Sim Smith, London; and Poem, at Las Palmas Project, Lisbon, Portugal. Parris is represented by Sim Smith, London.

Daisy Parris
What Is That Sad Feeling?
2019

Daisy Parris
Thinking Of You
2022

Ink and pencil on paper
Signed and dated verso with pencil

Ink and pencil on paper
Signed and dated verso with pencil