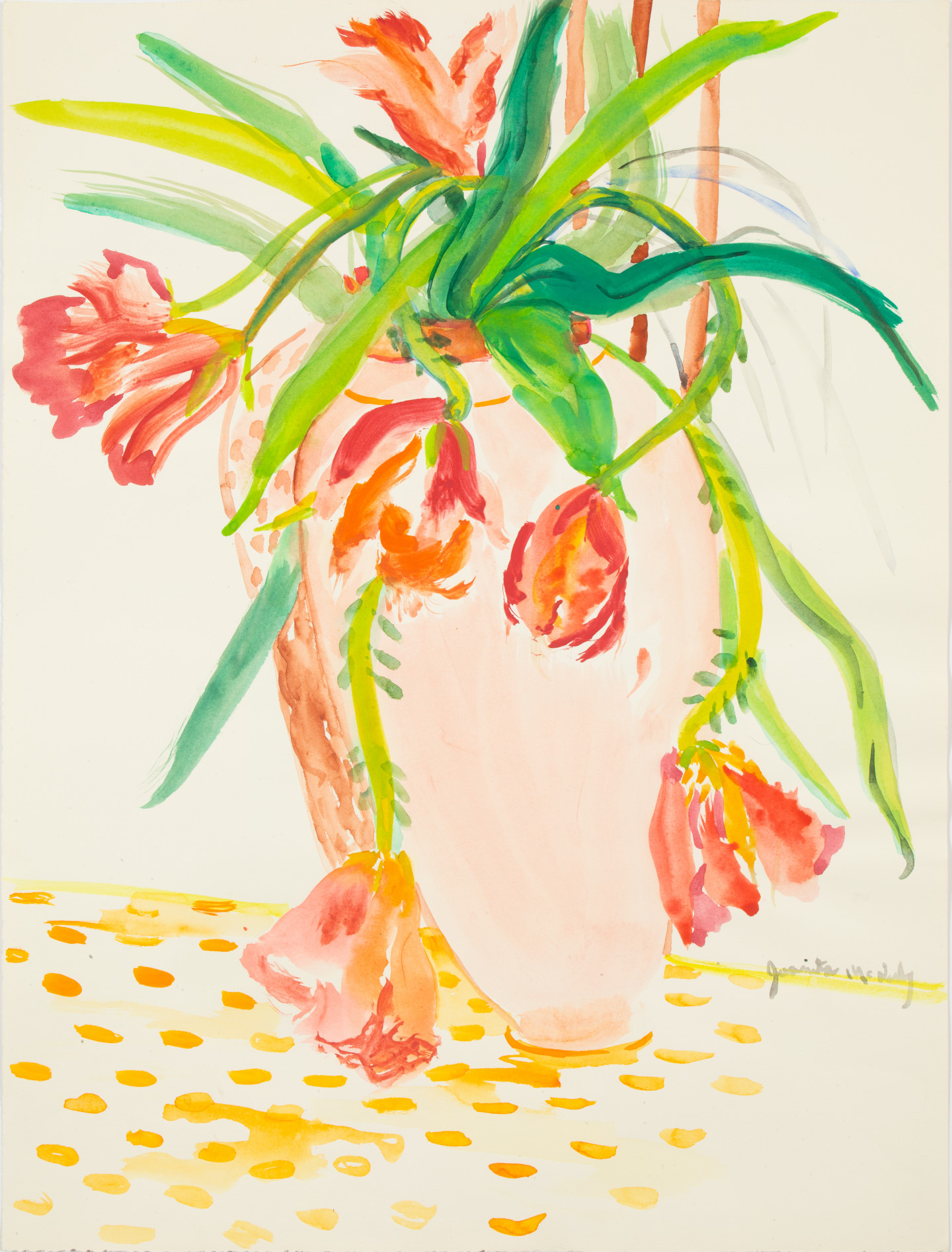 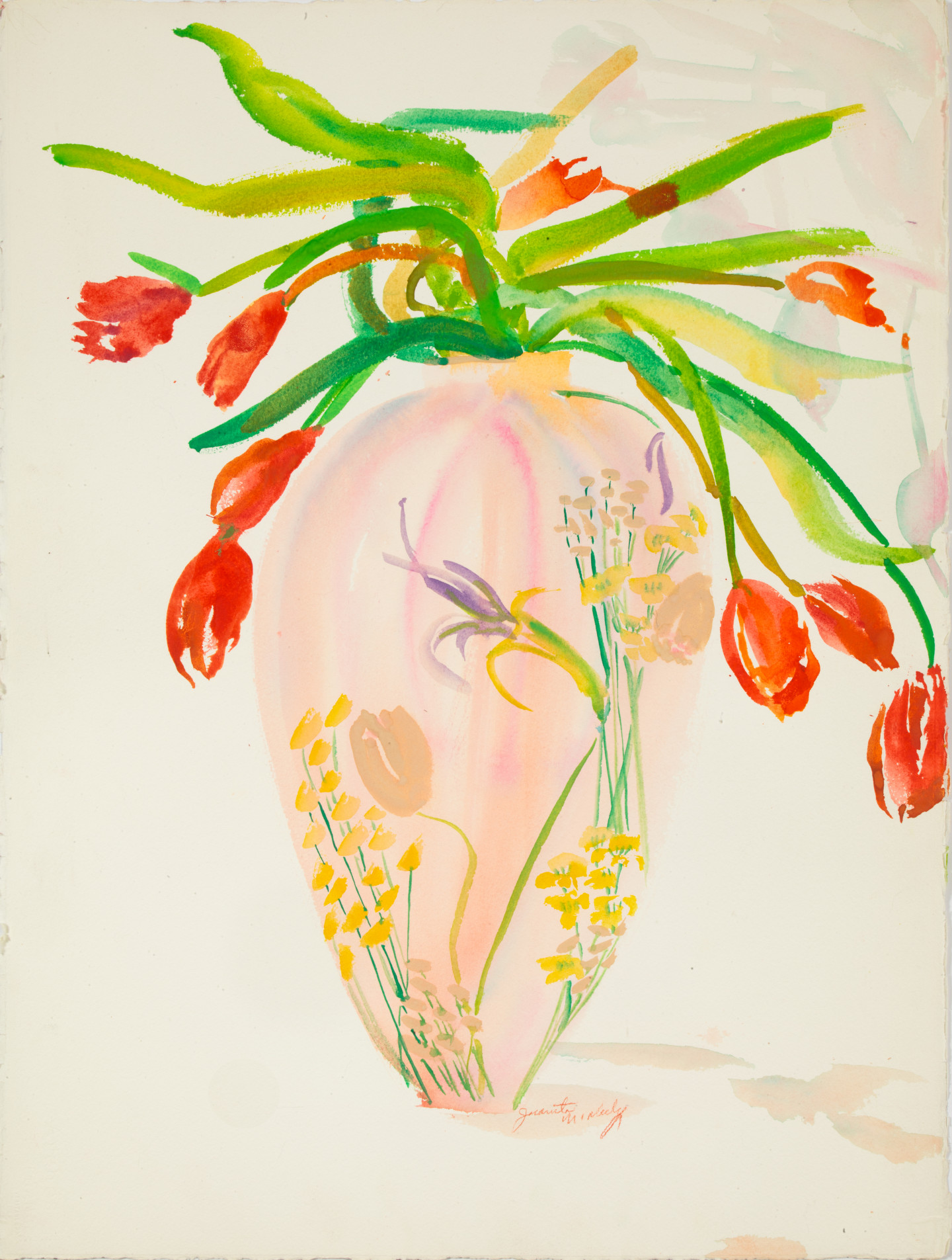 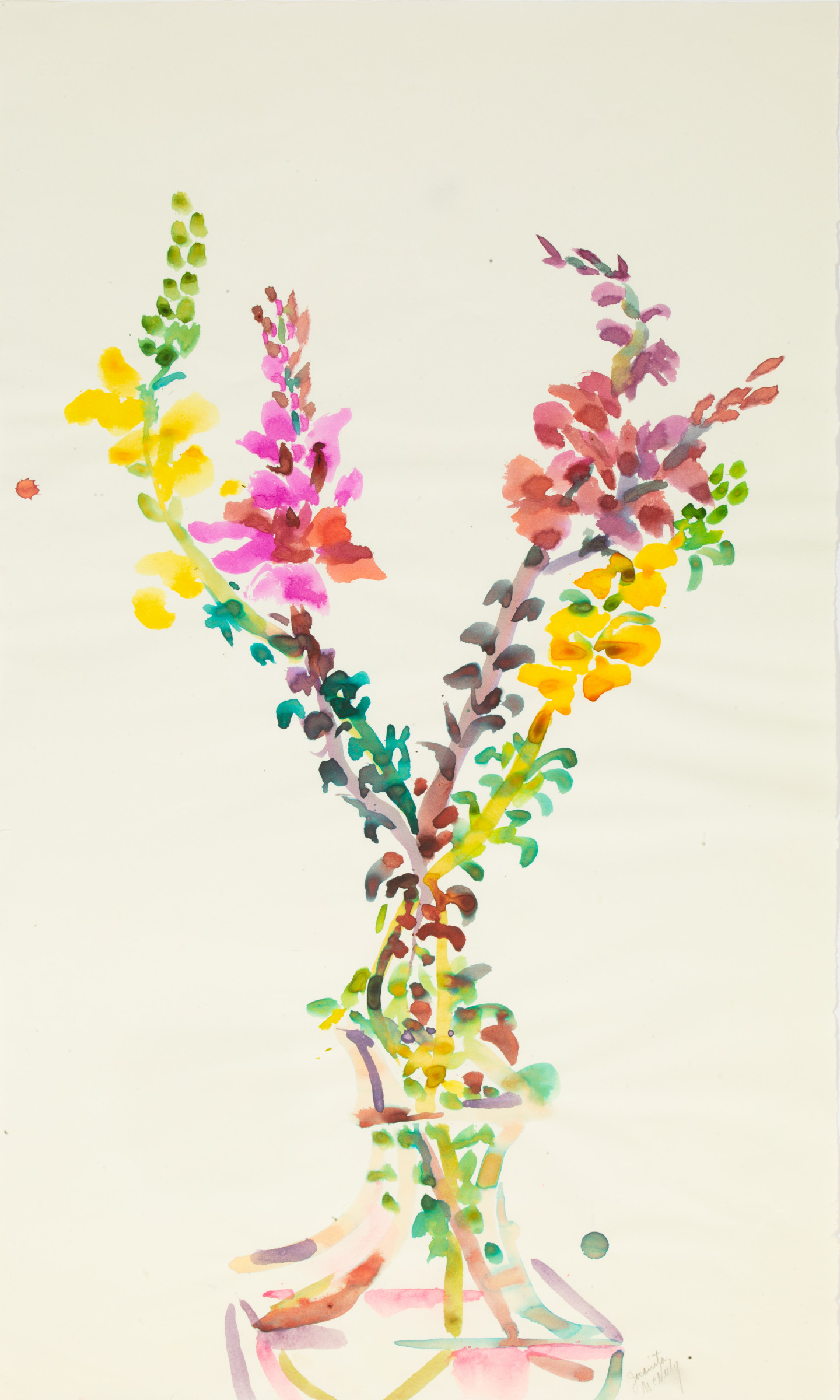 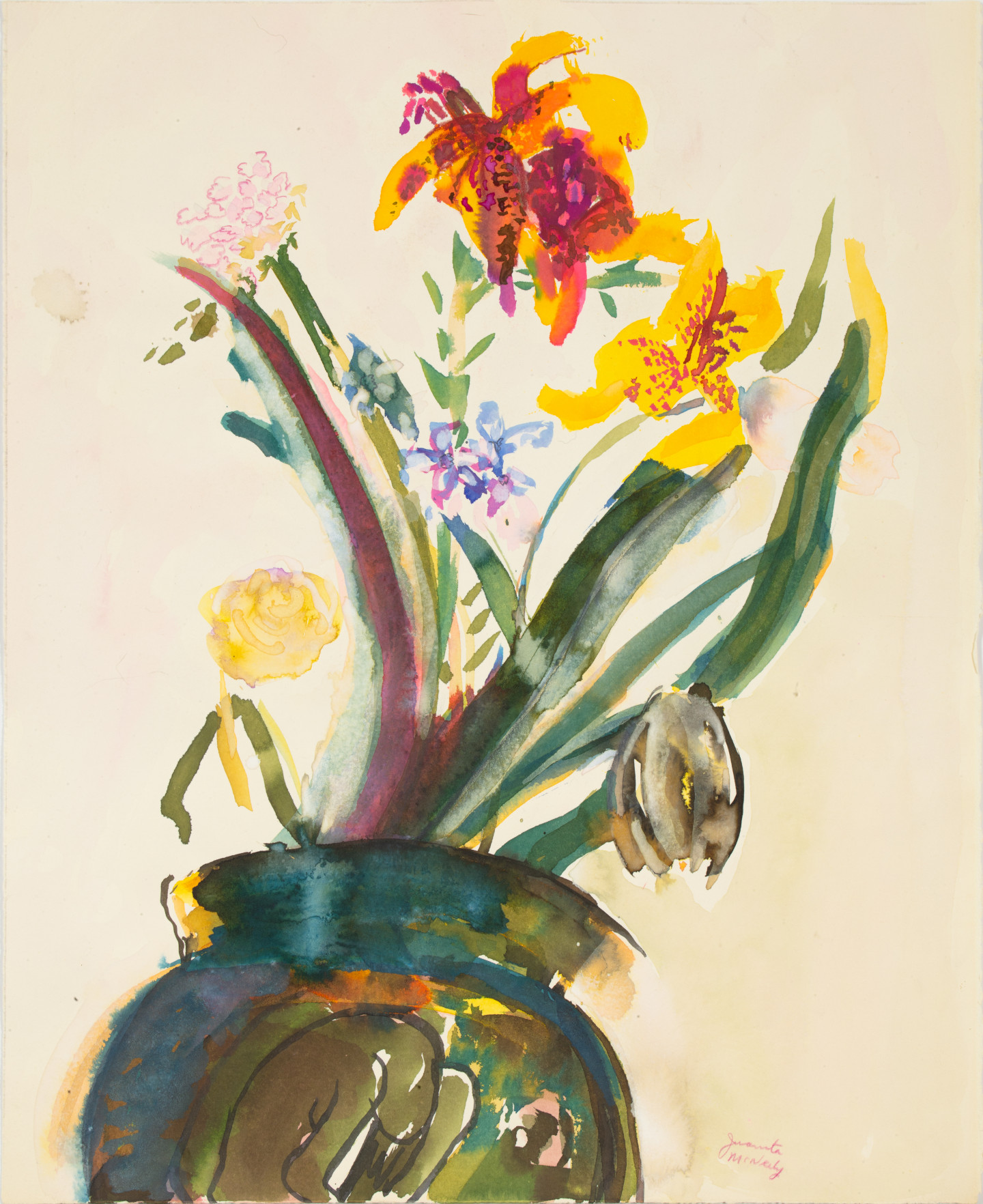 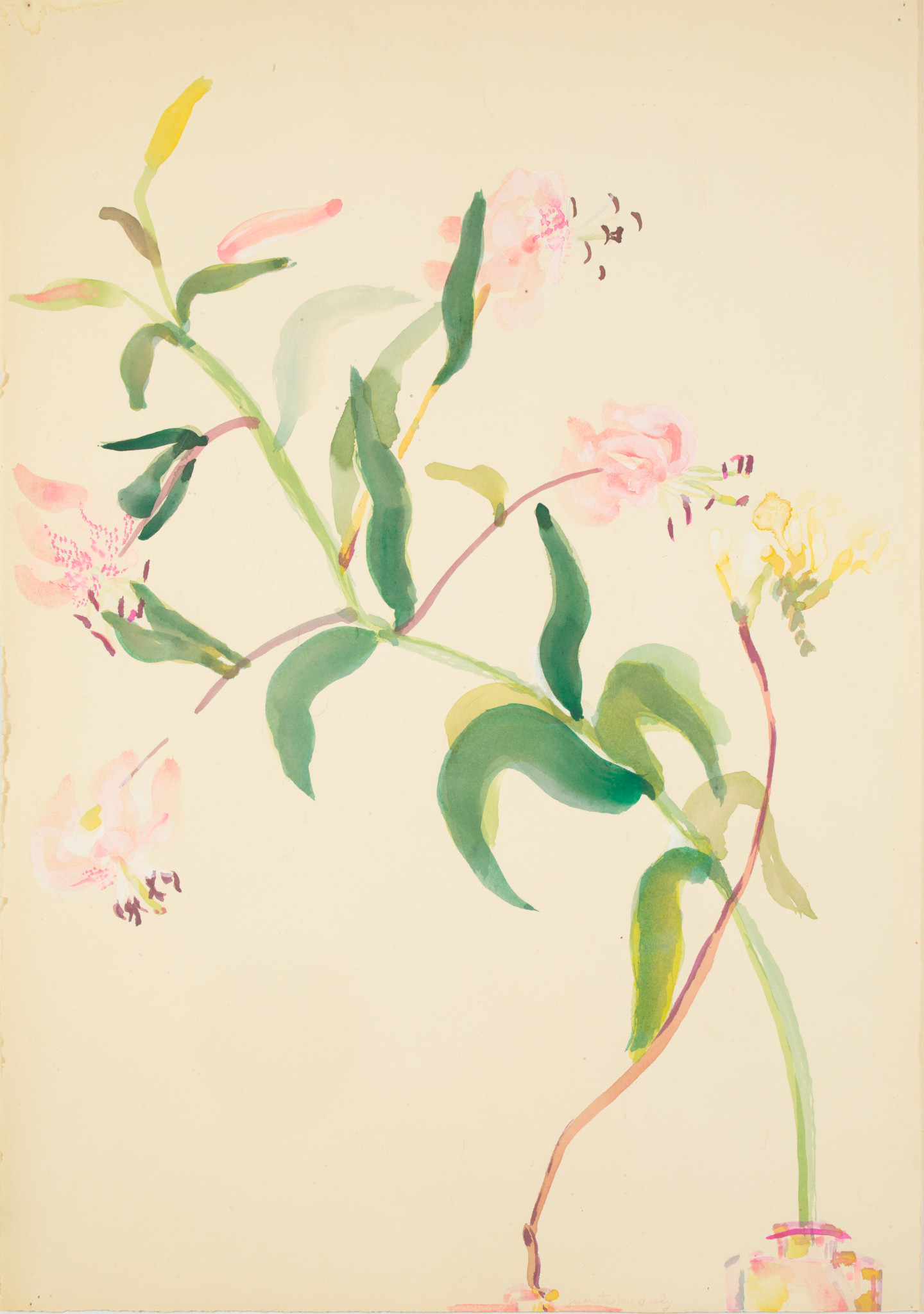 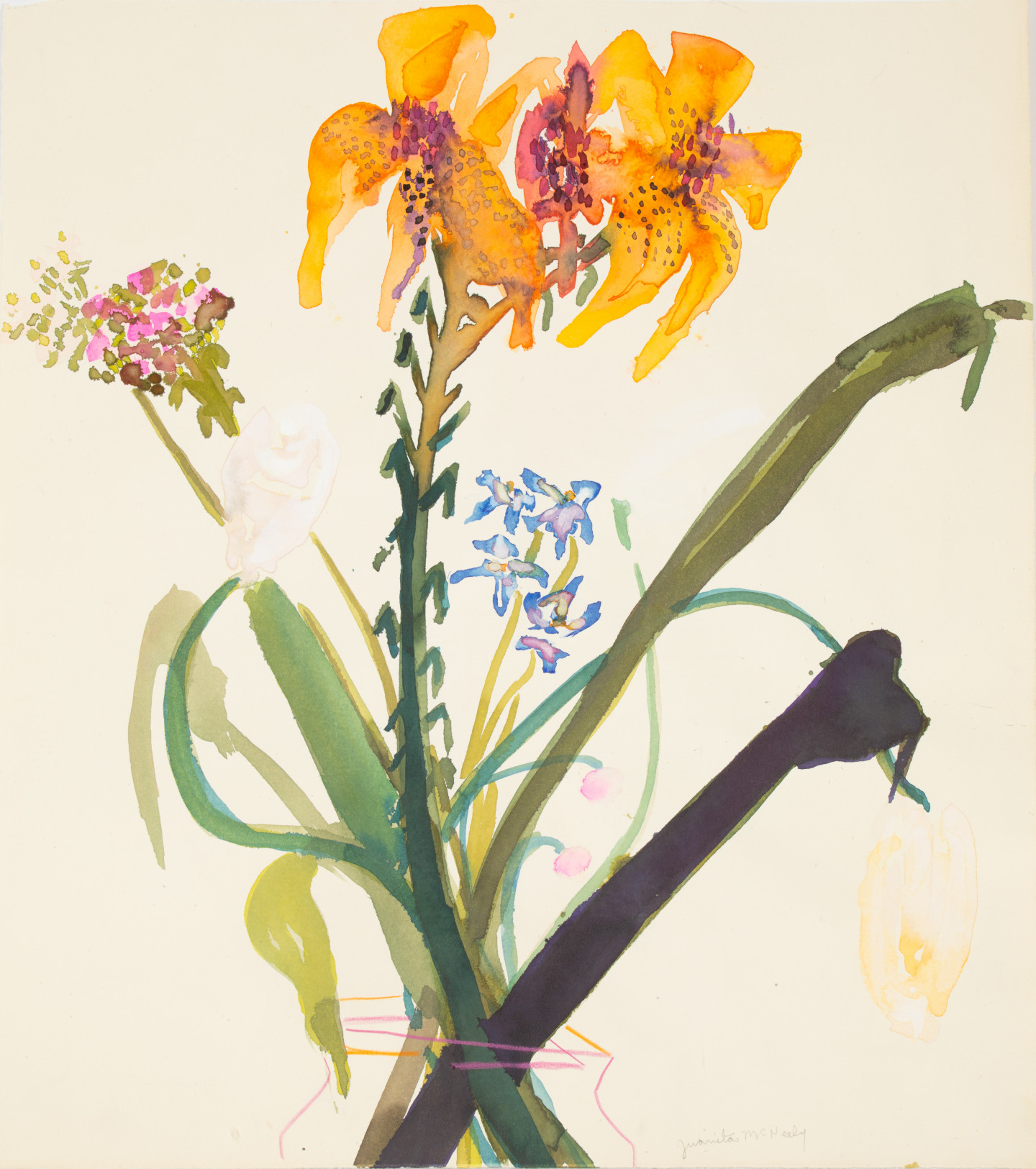 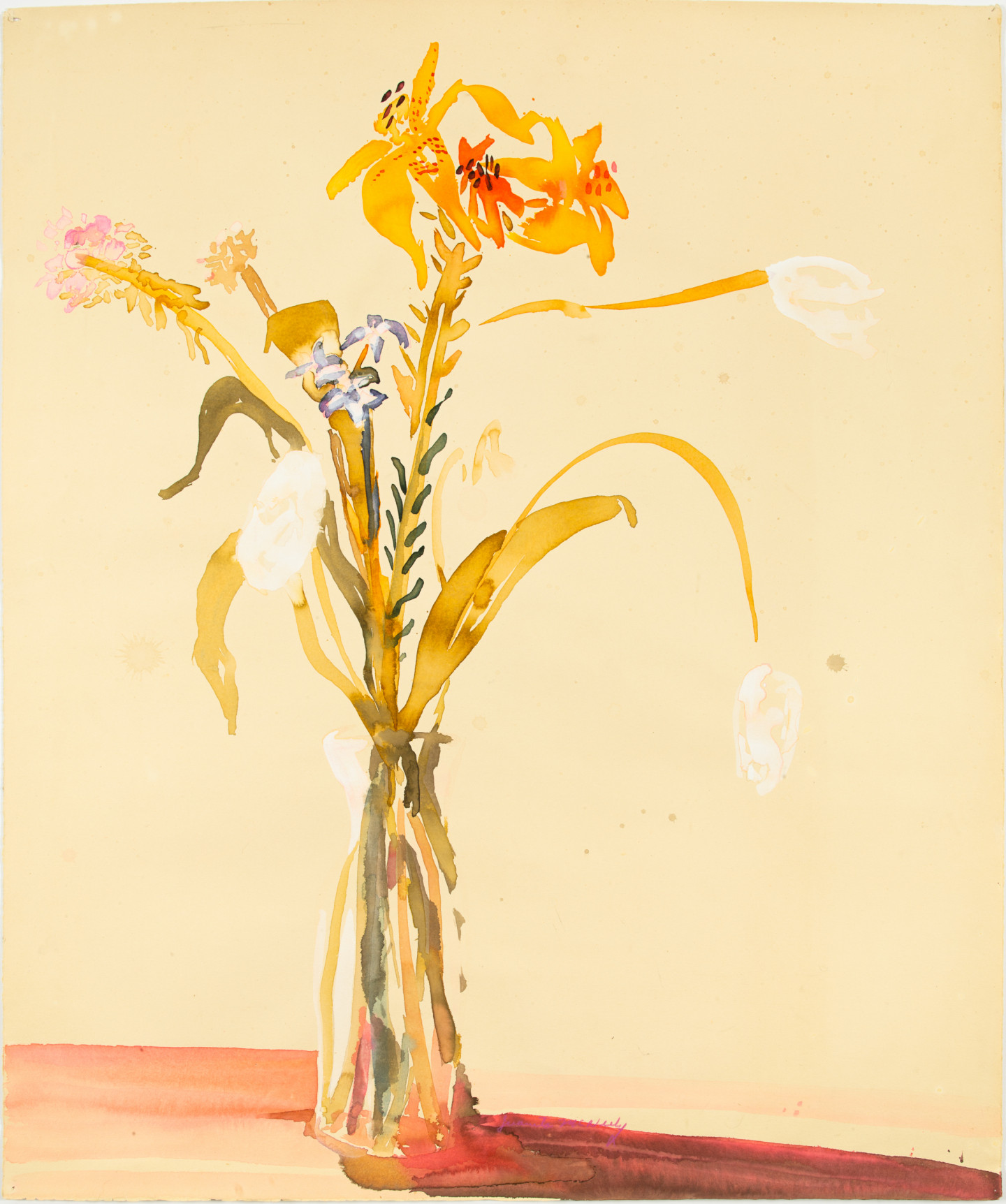 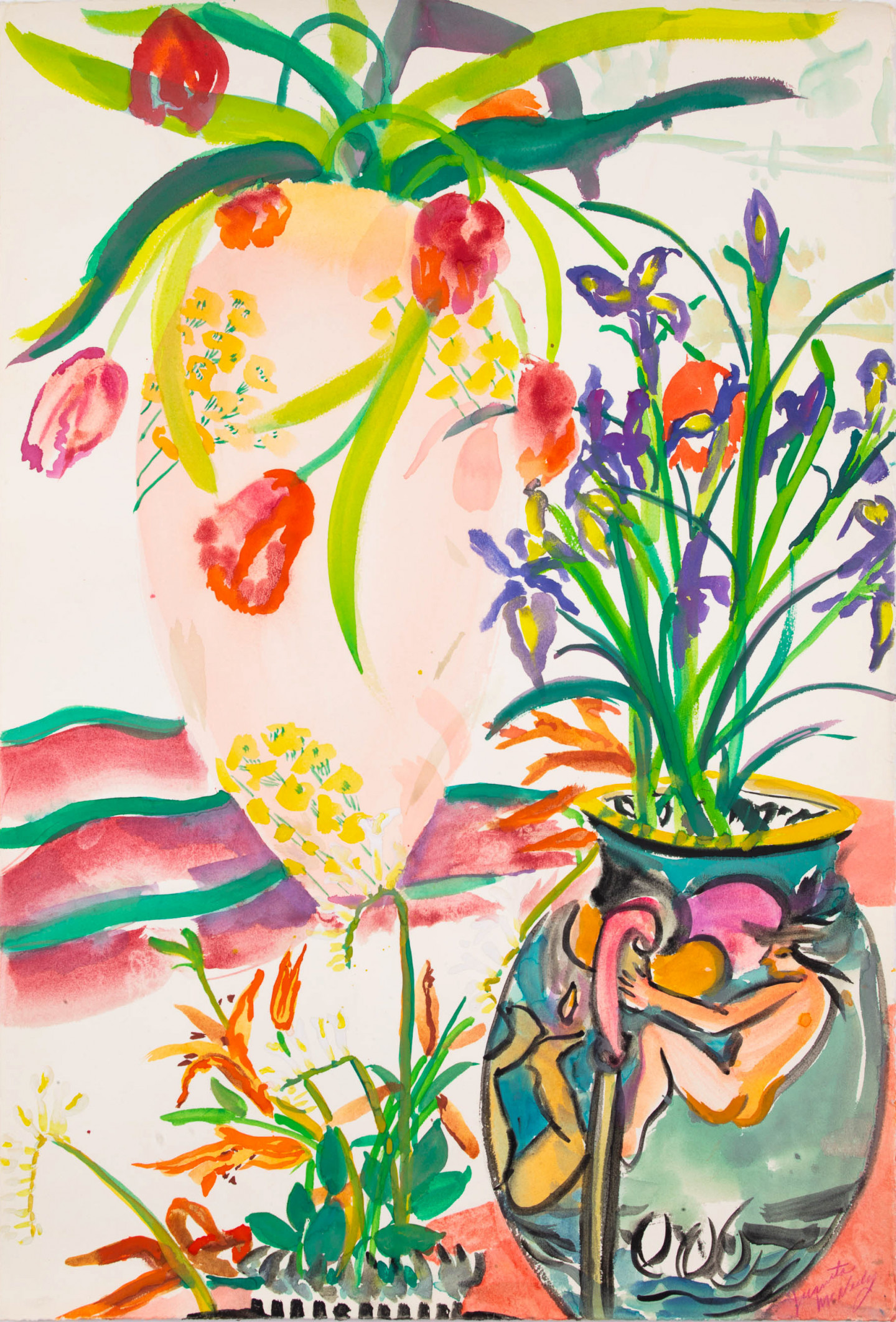 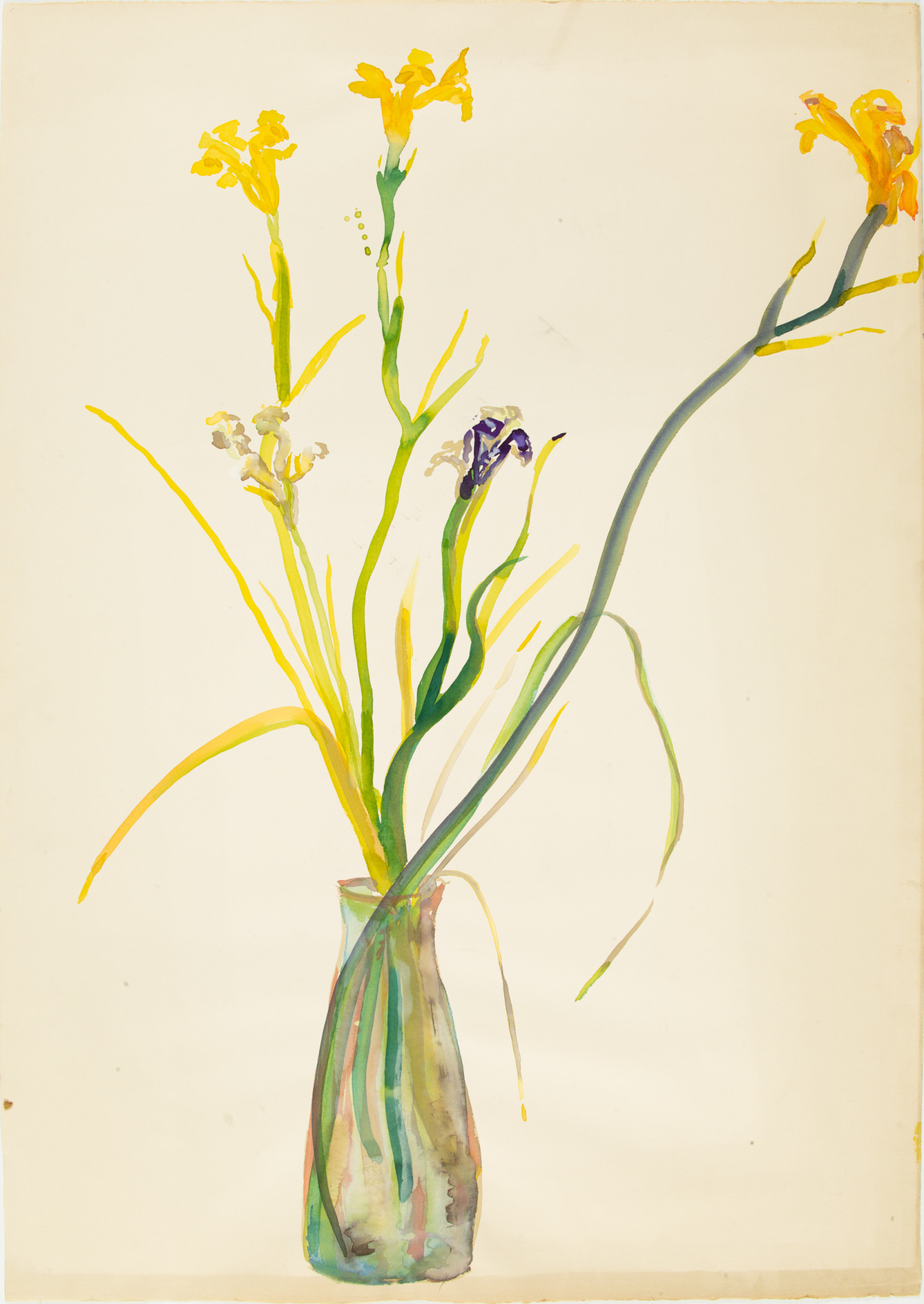 Juanita McNeely’s highly-recognizable figurative work conveys a striking physicality. I see the change presents a group of watercolors on paper from the 1980s, each depicting a bouquet of flowers observed from life, and often appearing in painted ceramic vases made by the artist. Although McNeely’s works most often depict human and animal figures across drawings and large-scale, multi-panel paintings, flowers are also of particular significance to her, given their distinct beauty and continually changing presence between conditions of flourish and decay. Throughout McNeely’s oeuvre, drawing is inherent to both her final works and the process of making them, and it is through drawing that she most immediately renders both observation and memory. In this way—beyond the standalone brilliance and marked intimacy of this series—McNeely’s flower works also function as a key to her larger artistic concerns in terms of both subject and method.

At its core, McNeely’s work is about the movement of life. As with her many other subjects, the flowers in these watercolors are alive and actively in a state of motion. McNeely first moved to New York City in 1967, where she became entrenched in the city’s artistic scene and feminist movement. During the ‘70s, she began meeting and collaborating with a group of fellow women artists in the city whose work also confronted intensely personal and times erotic or taboo subjects. Following our JamesFuentes.Online presentation in 2020 of works on paper from the ‘70s, I see the change marks an important moment from the decade that followed, in which McNeely turned a wider focus to her surroundings as a way of breathing fresh life into her work. These watercolors contain all manner of tulips, iris, tiger lilies, lilac, ranunculus, daffodils, and snapdragons—reaching tall and wide or wilting over, and some rendered in homage (as in Toulouse Lautrec, one of McNeely’s most beloved artists). Speaking about this body of work today, McNeely explains, “I have always had that gift that I can see something and I keep it in my mind and re-create. I often paint from my head, but we have a lot of flowers around.” She continues, “I see the change.”

Juanita McNeely (b. 1936) was the subject of Indomitable Spirit, a career survey curated by Susan Metrican at Brandeis University’s Women’s Study Research Center in 2014. McNeely was part of the Fight Censorship group founded in 1973 by Anita Steckel, alongside Judith Bernstein, Louise Bourgeois, Martha Edelheit, Joan Semmel, Hannah Wilke, and Eunice Golden, among others; as well as Women Artists in Revolution (W.A.R.), Redstockings, and other groups. McNeely has exhibited at venues including the Queens Museum, Art Institute of Chicago, Philadelphia Museum of Art, and Gemeentemuseum in The Hague, among others. McNeely received the Ellin P. Speyer Prize from the National Academy Museum, and honors from the Pollock-Krasner Foundation, the Gottlieb Foundation, and the New York State Council on the Arts. Her work is included in the collections of the Saint Louis Art Museum, the National Taiwan Museum of Fine Arts, and the Palacio de Bellas Artes in Mexico City, among others.

Juanita McNeely
She is living with me
c. 1980s