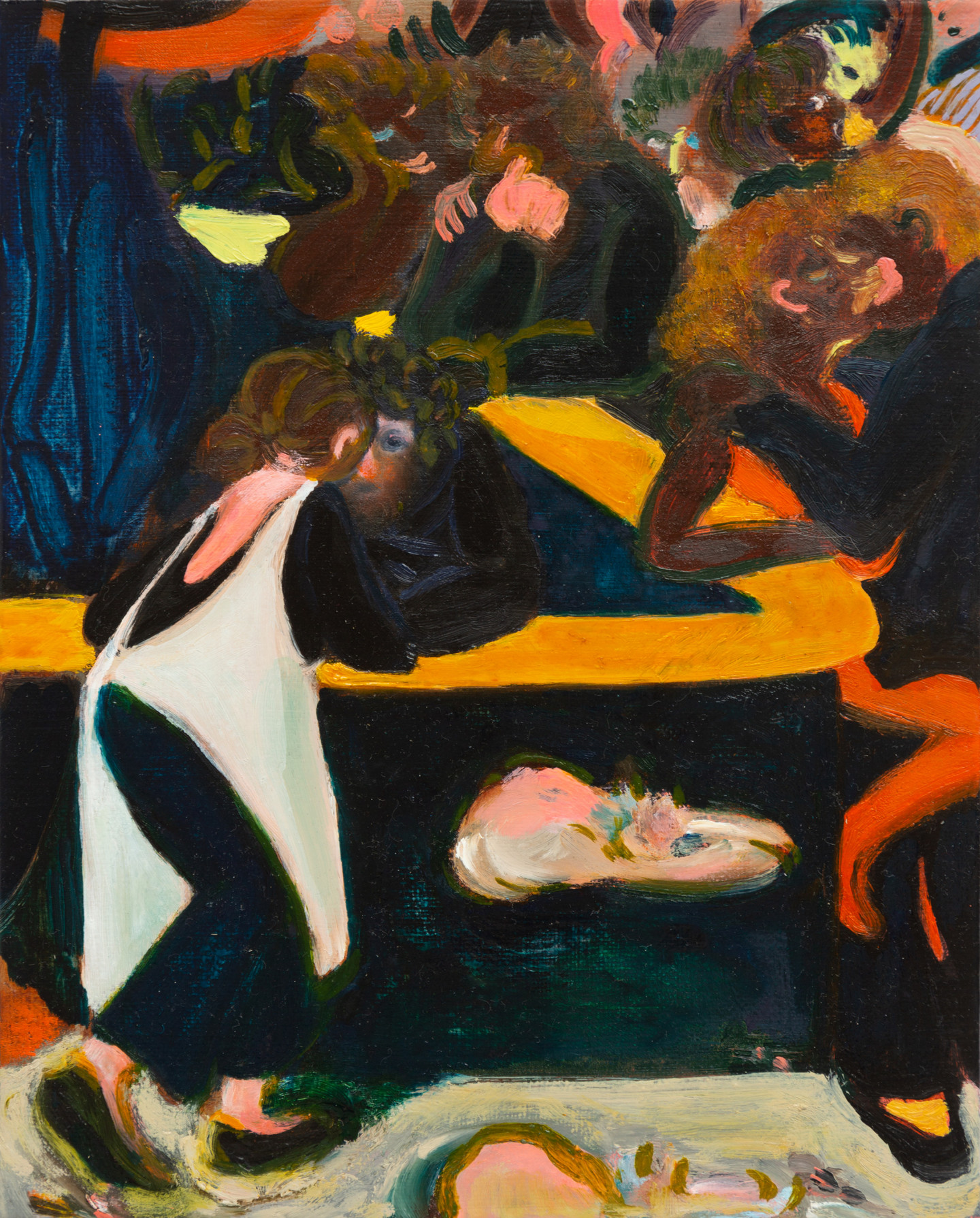 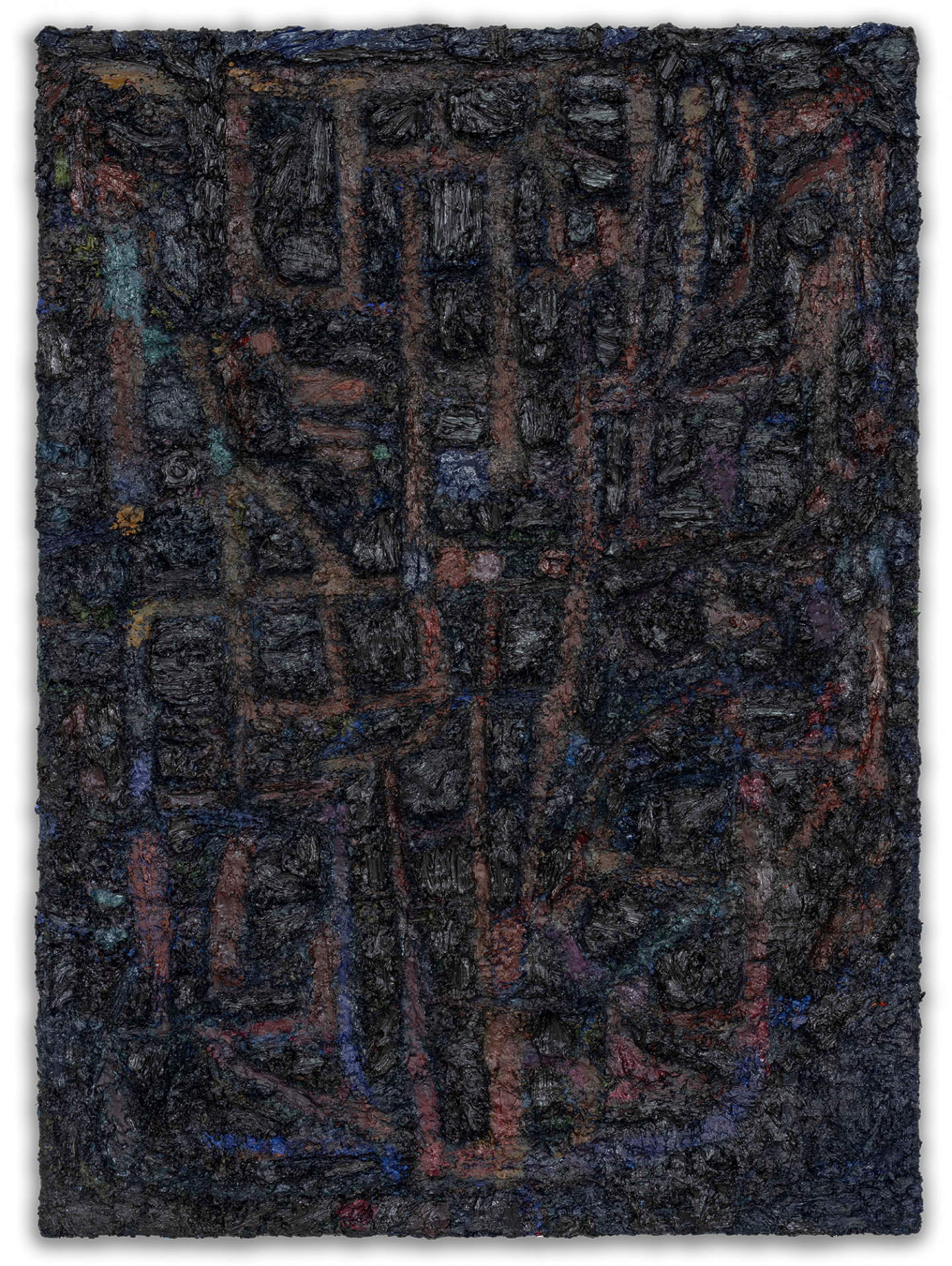 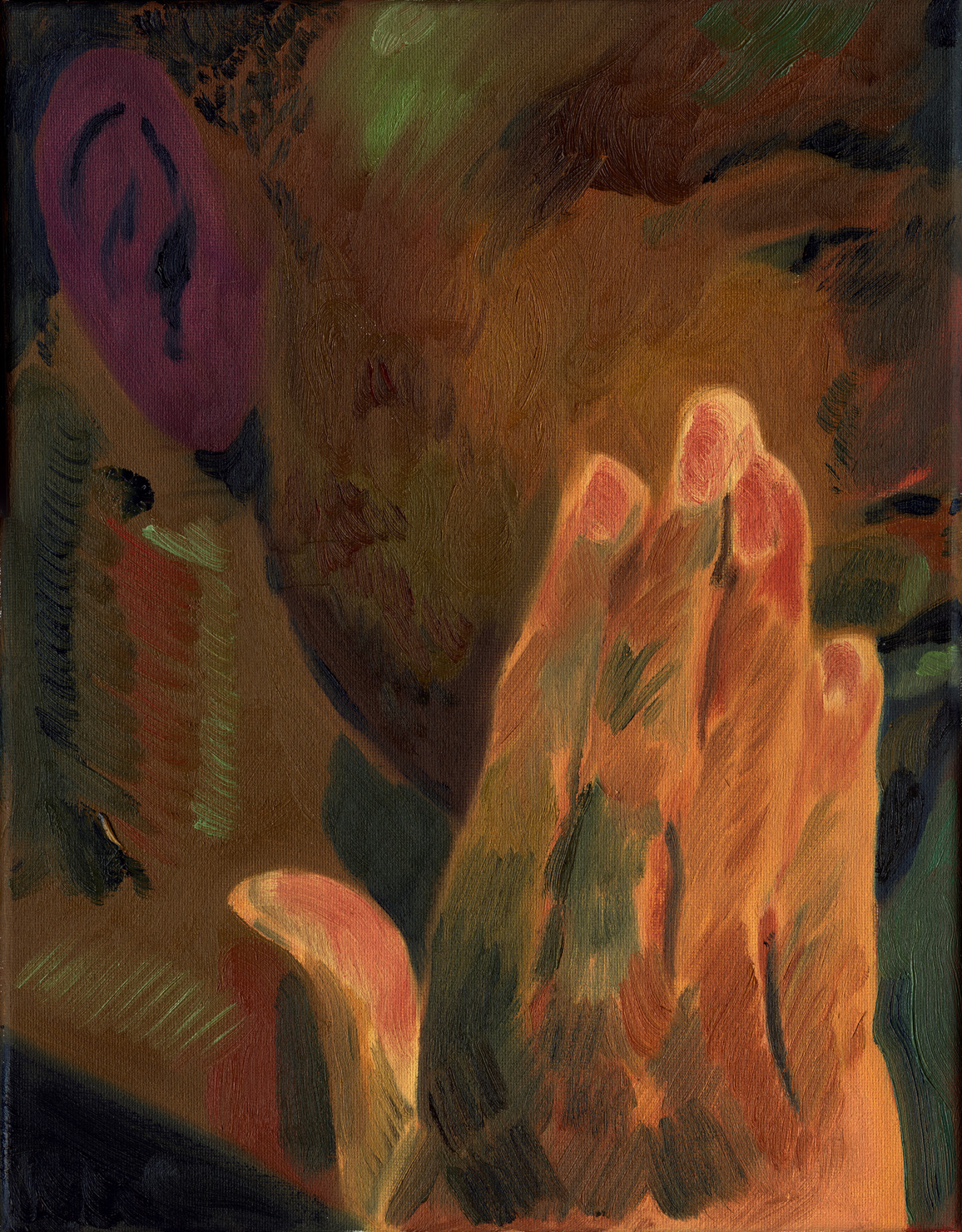 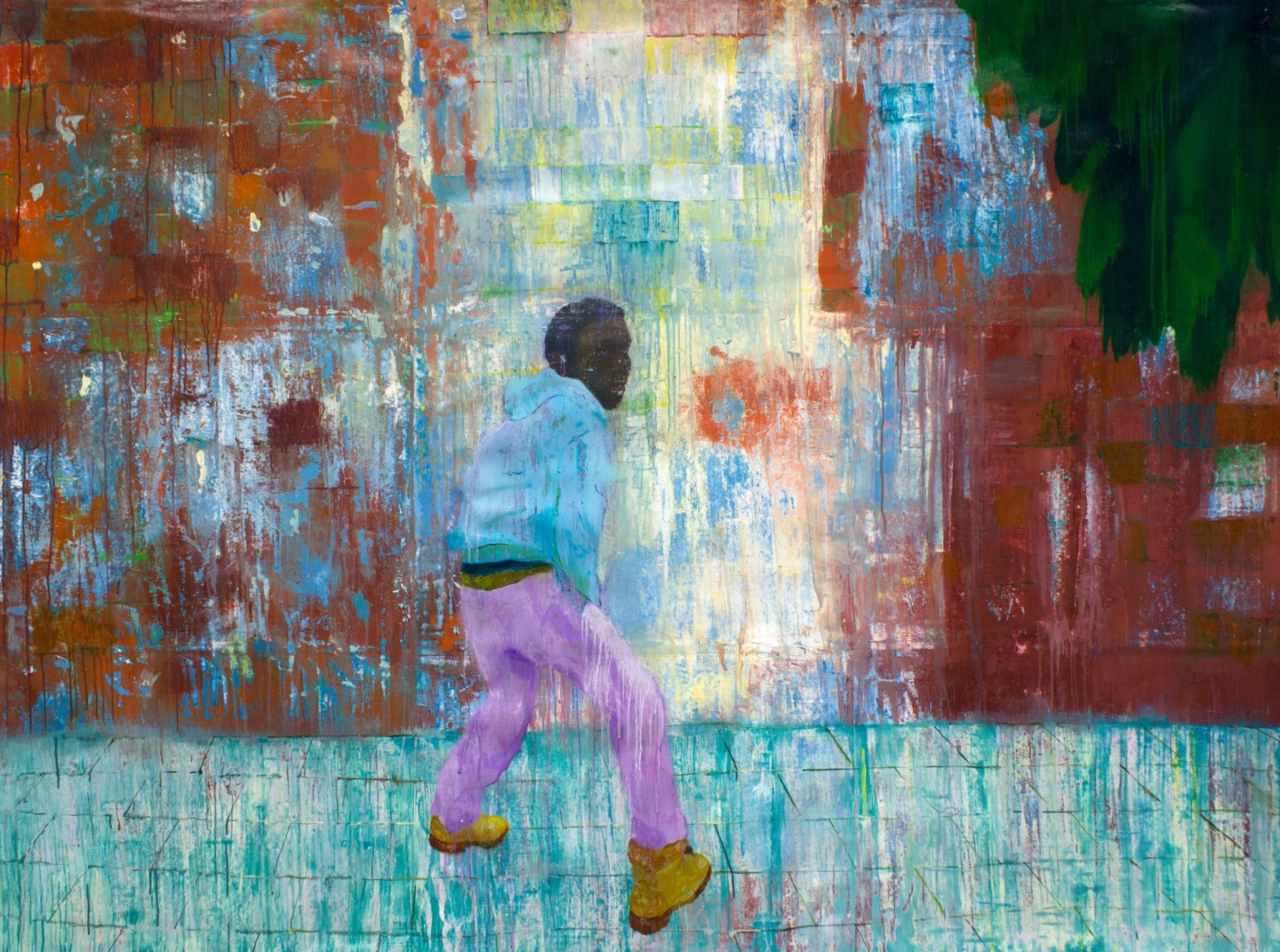 Sedrick Chisom, The Superstitions of Ahab, who pissed against the wall, 2019 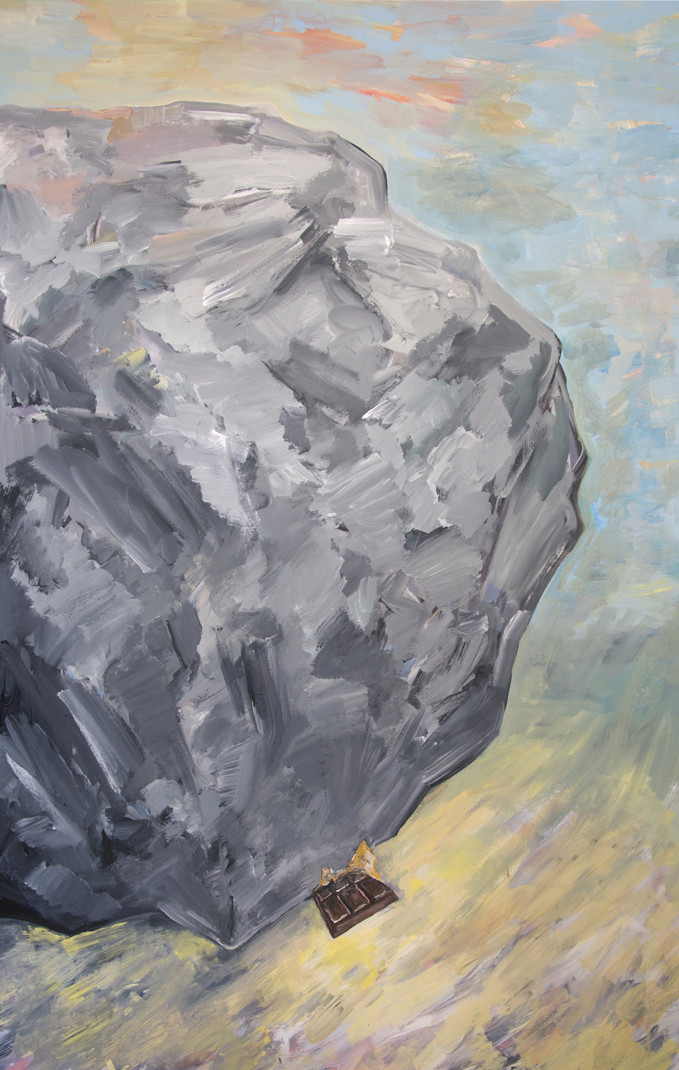 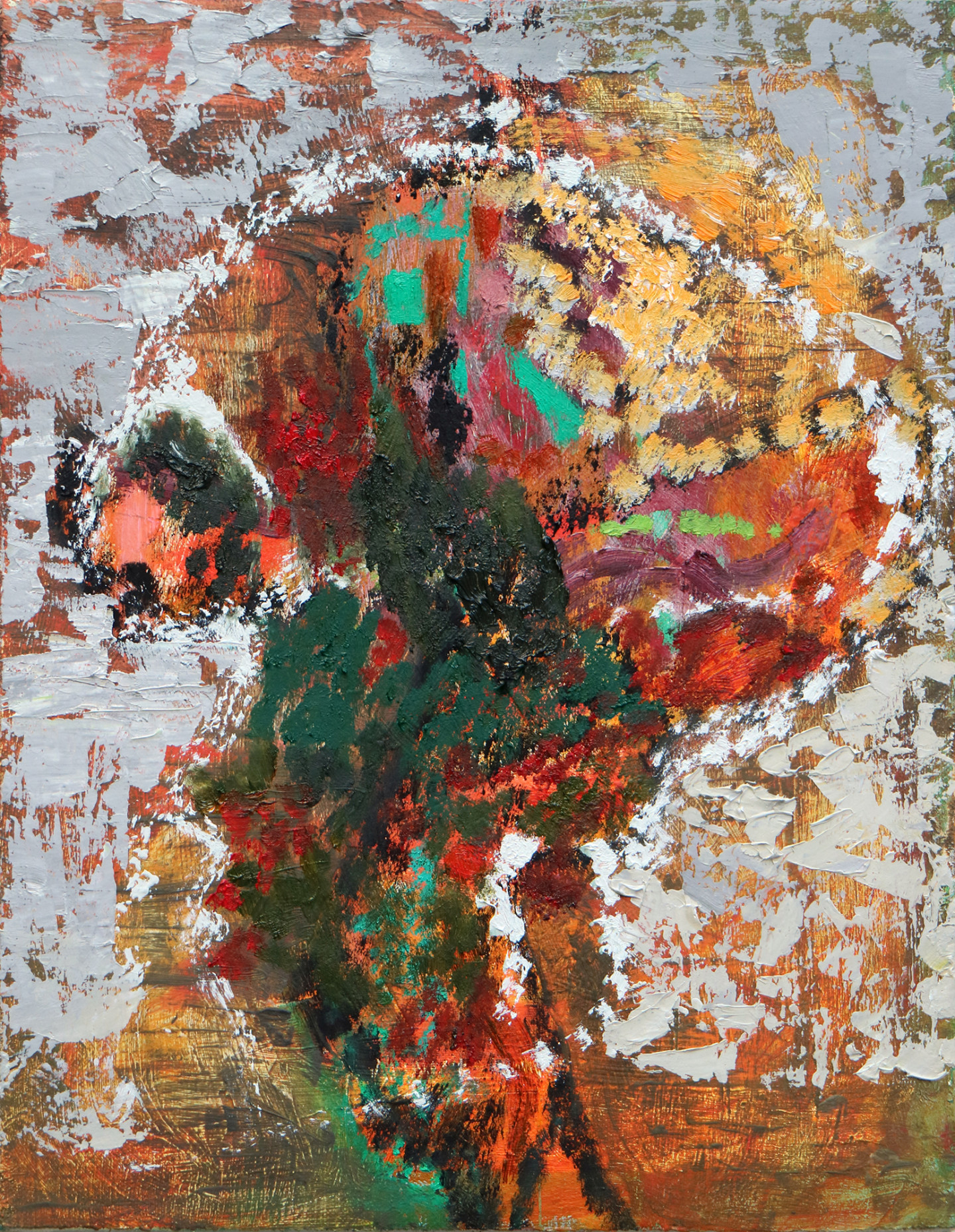 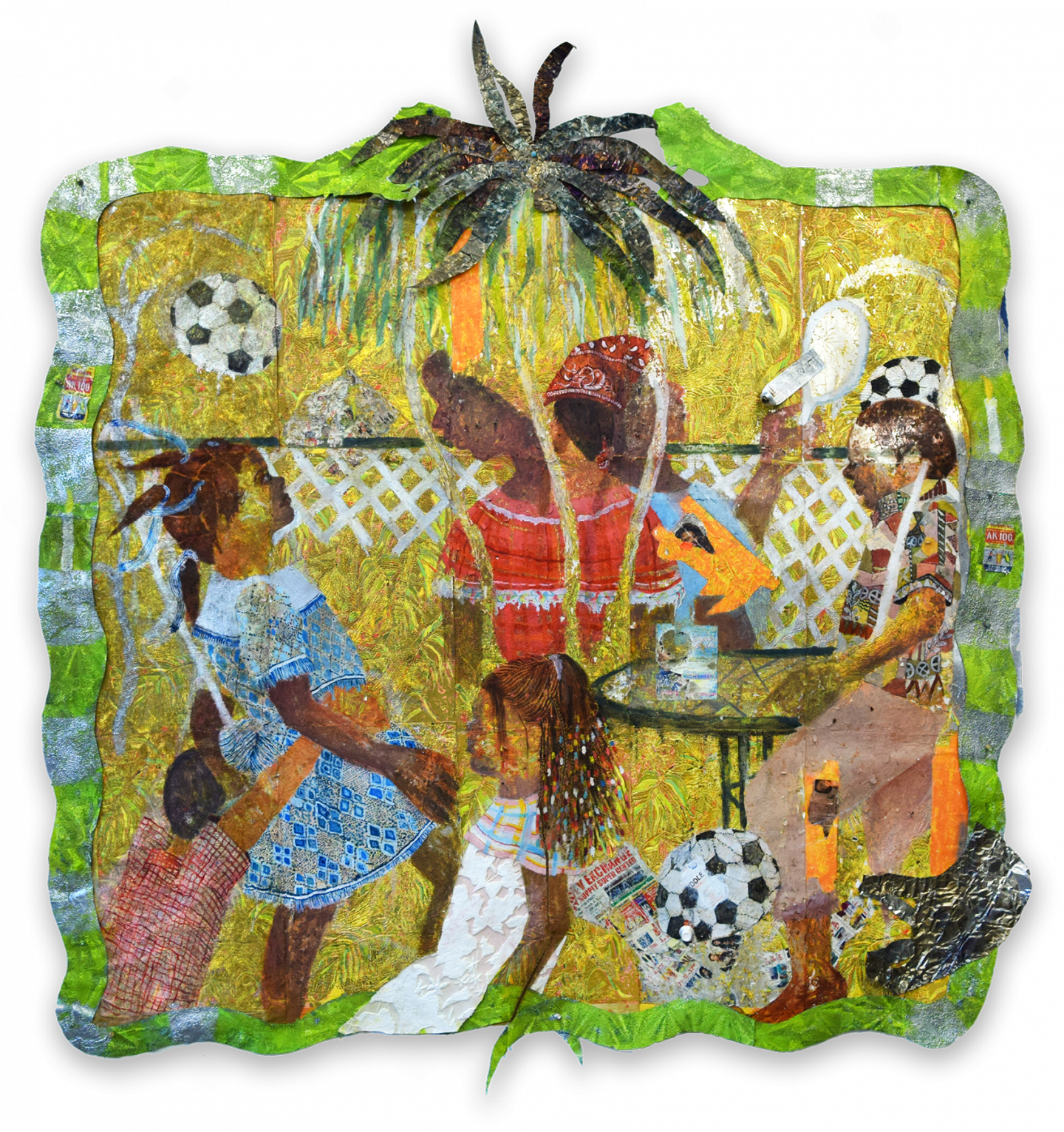 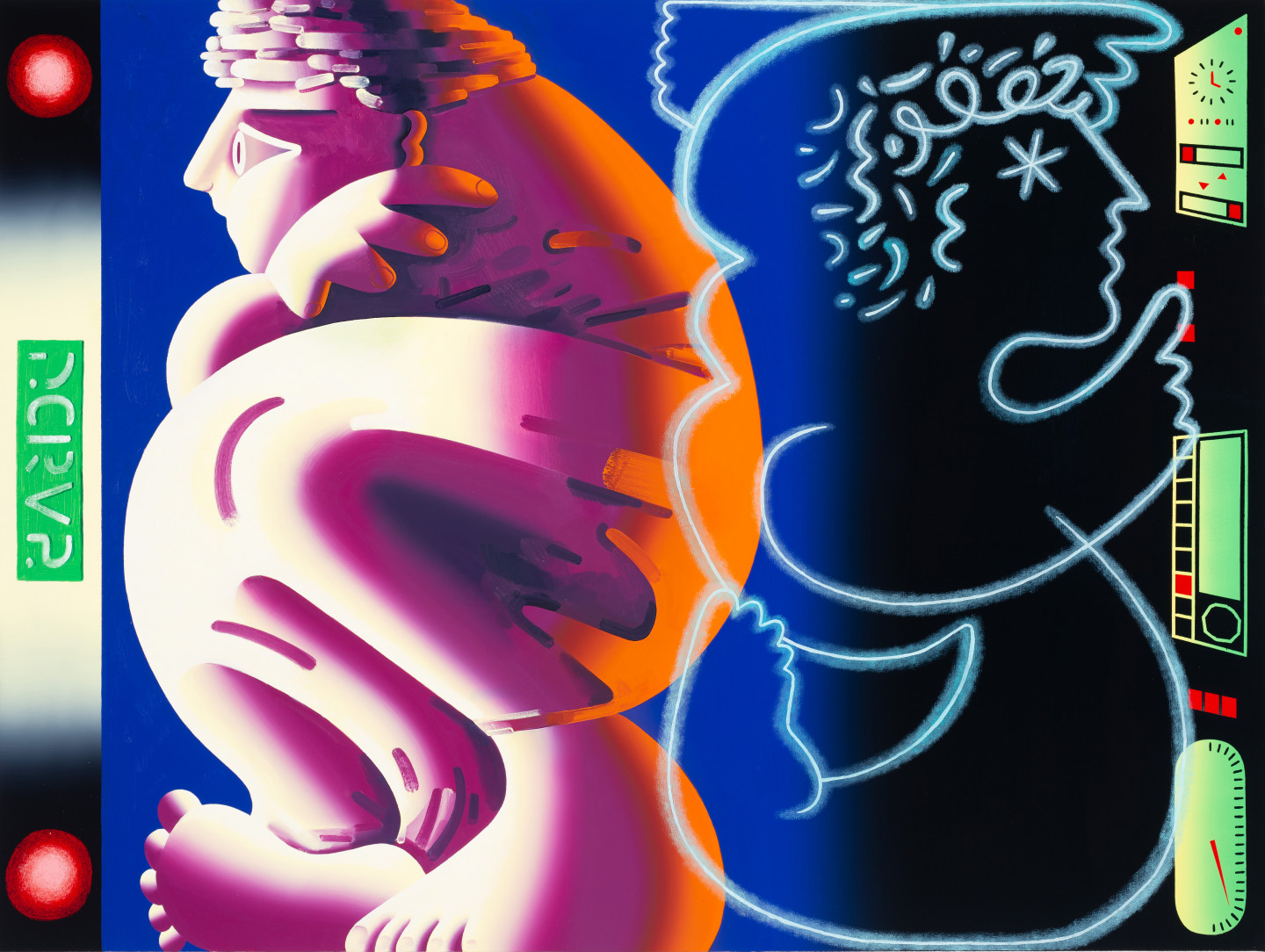 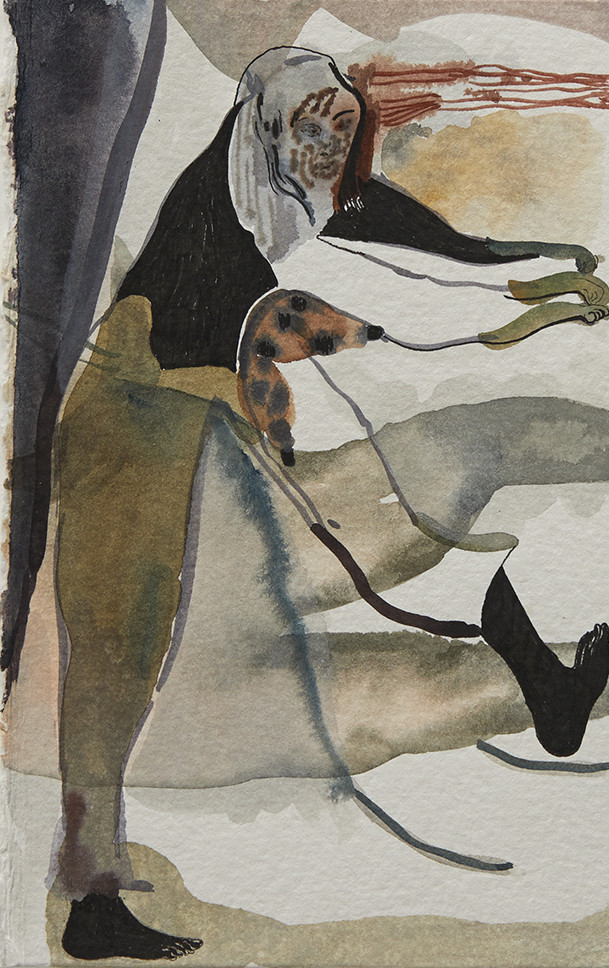 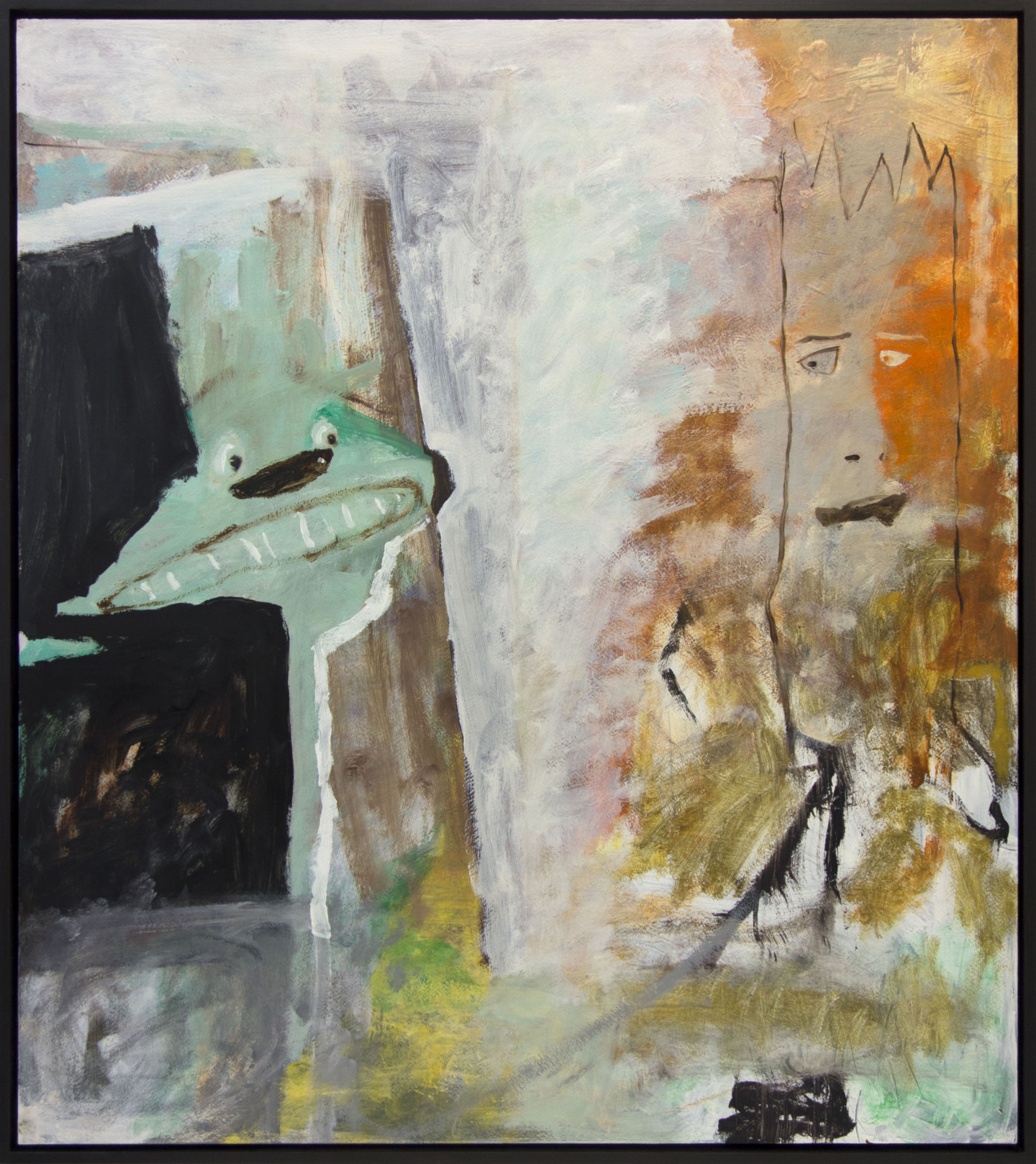 Abstract with Figure brings together a group of painters for whom abstraction serves as host to a manifold cast of objects, people, and spaces, each one reacting to - and existing within - ambiguous and imagined worlds. Objects and people dissolve into space, materialize from striated brushstrokes, and displace bands of color in efforts to hold visual ground. Scenes drift in and out of legibility, opening the door to an abbreviated surrealism by way of hallucinatory abstraction. Working outside and alongside the figurative-abstract continuum, the artists create pictures whose associative, often cryptic imagery calls into question that dichotomy’s continuing usefulness; rather than attempt to synthesize abstraction and figuration, they simply let the two compete for visual primacy. Sometimes this process results in a push-and-pull effect, where images nudge their way through the ether, coming to dominate the picture with graspable familiarity. Other times, abstraction commands the image, muting discernible connections to the physical world and encoding objective imagery in an opaque visual language. Working across a broad spectrum of styles and intentions, the artists nevertheless approach common understandings of the painted object’s inherent malleability relative to the rest of the picture. Abstraction comes from both within and outside objects and subjects, testing the strength of their respective boundaries. Ultimately, integration between figure and ground proves indispensably central to the work; affirmations of painting’s unique ability to define its own terms of engagement.
Curated by Katrin Lewinksy and Ace Ehrlich.

James Collins creates writhing, tarry pictures under which geometric circuits pump and slither. Engulfed in subtly chromed darkness, they suggest maps or, perhaps, anatomical observations. Paint seems to move on its own accord, allowing the tension in Collins’s pictures to play out as if by some force outside his own hand, testifying to painting’s unique ability to redefine itself for each viewer. With no immediately discernable figures, Collins’s paintings rely on the innate desire for familiarity, promoting an understanding of abstraction that remains resolutely mercurial.

Using her Haitian diasporic community in South Florida as the basis for her work, Kathia St. Hilaire paints figures in and of their specific environments - both visually and culturally. Her subjects occasionally become partially translucent, affirming the intangible but deeply felt connection between person and place. Using skin lightening product as a substrate for her paintings, Hilaire highlights the social anxieties surrounding diasporic communities of color, using formal decisions to address generational concerns.

Anna Jung Seo’s darkly humorous paintings place the viewer in a colorfully macabre world defined by composed claustrophobia. With little identifying information, her figures seem to slip into their surroundings as if under cover of night, even going to far as to combine with each other by osmosis. Spatial depth, just barely implied, locates the scenes within Seo’s world, advancing a view of abstraction as inherent in all non-observational figuration.

Dryly applied dabs and pokes of paint locate Lumin Wakoa as a student of impressionism concerned more with that movement’s approach to light and space than to subject matter. With an intentional abandonment of traditional signifiers of space and depth, the artist uses imagery and abstraction virtually interchangeably. Subject and abstraction operate in complete harmony, resulting in unified paintings where physical modeling is implied through careful applications of layered color. Even when subject matter is identified, it resists any face value reading, instead confronting the viewer on its own terms.

Anthony Cudahy’s appropriations and alterations of queer photography position him as observer, participant, and, of course, creator within that canon. Advancing ideas of portraiture as an inherently expressive and associative endeavor, Cudahy’s figures seem to bristle with inner moments of pent-up emotion, delivered here in abstract brushstrokes. Hatched lines and sliding scales of color ensure that his transformative actions from photograph to painting are both loudly felt and resoundingly understood in contexts of queer imagery and portraiture more broadly.

Eleanor Swordy uses the long history of figurative painting as both formal source material and a point of departure. Developing a singular visual approach to a range of current and historical subjects, Swordy’s figures contort and conform to her paintings’ own internal architectures. Bits of flinging debris texture the image as both a consequential byproduct of human activity and a guide for the eye’s movement across the canvas; pieces of abstracting information unify the image, and clarify the formal conceits of Swordy’s world. Even as figures maintain distinct structural integrity, their complete submission to the composition render them essentially abstract.

Grounded only by a carefully calibrated internal weight, Sedrick Chisom’s subjects float in washed, acidic environments where a lack of identifying information suggests complex internalities. As the viewer moves to orient him or herself before Chisom’s structurally ambiguous stages, figures prove sympathetic and indispensable. As if overwhelmed, understandably, by deluges of dripping pigment, the figures demand sympathy from the viewer while declaring the sort of agency that can only come from the brink of annihilation. Taking color to a dramatic extreme, Chisom’s unstretched paintings channel notions of race and associated anxieties through sublime confrontation.

Tenki Hiramatsu paints conversations in progress to both ground and compose imagined creatures, whose dissolution into their surroundings furthers their nonhuman, nonreal status. As figures prove physically immaterial, their unseen and unheard words remain, in the viewer’s mind, as records of an impossible conversation. Interested in painting as both depiction and facilitator of discourse, Hiramatsu paints scenes about the incomparable pleasure of being lost in a dialogue – a physical action whose fundamental benefit to the participants proves abstract at its best.

Derek Paul Jack Boyle nestles cloying abstraction into neo-surreal scenes whose underpinnings of urban cosmic horror often press the viewer to reconsider life’s persistent strangeness. Objects perennially out of place propel a vision of the world as disorganized and darkly funny; an imagining of a world where objects act like people or bacteria, moving on their own and assuming lead roles. Boyle’s lithe surfaces recall Post-Impressionism and its attractive willingness to ascribe participatory meaning and personality to walls, chairs, and boots.

Maja Ruznic (b. 1983) is a Bosnian-born, New Mexico-based artist who paints diluted, out-of-focus figures and landscapes that explore nostalgia and childhood trauma. The ritualistic nature of her work reflects religious and mythological interests, including Slavic paganism and Shamanism.

Sedrick Chisom
The Superstitions of Ahab, who pissed against the wall
2019

acrylic and spray paint on paper