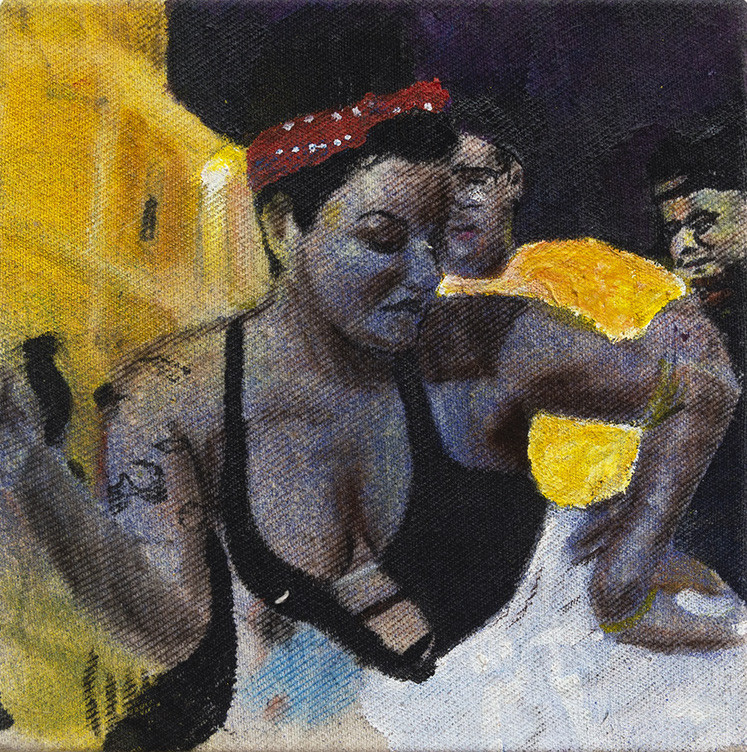 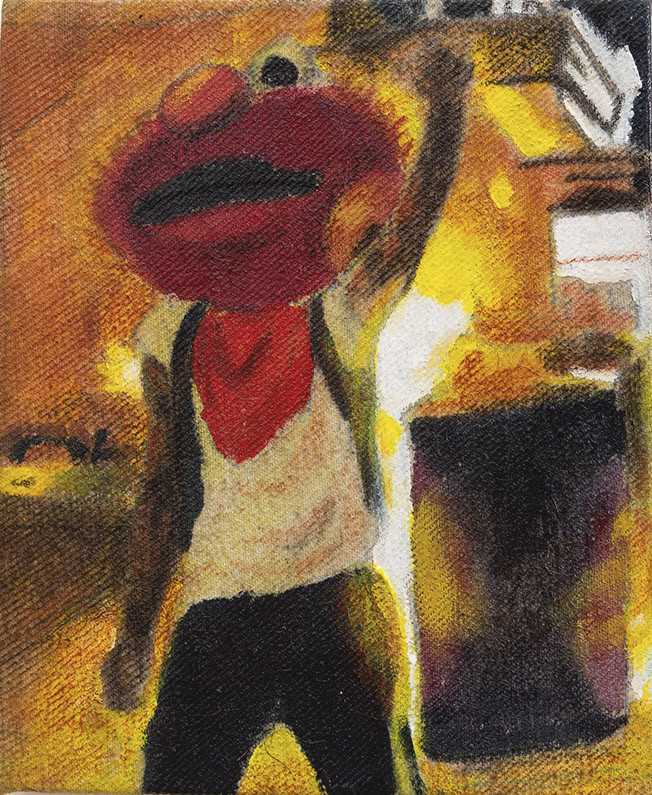 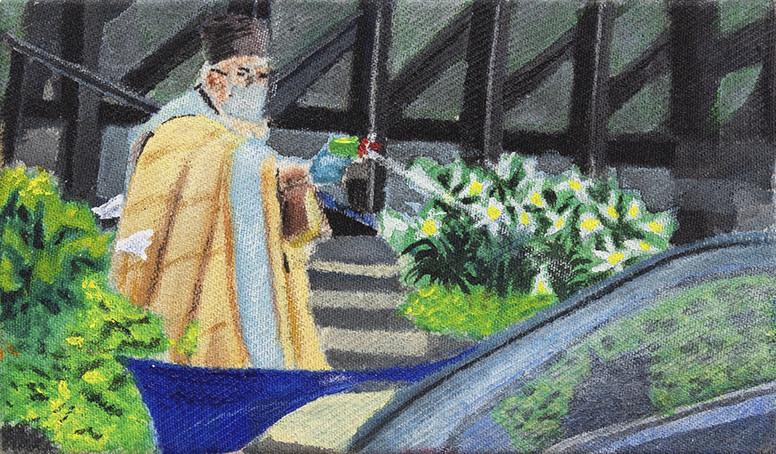 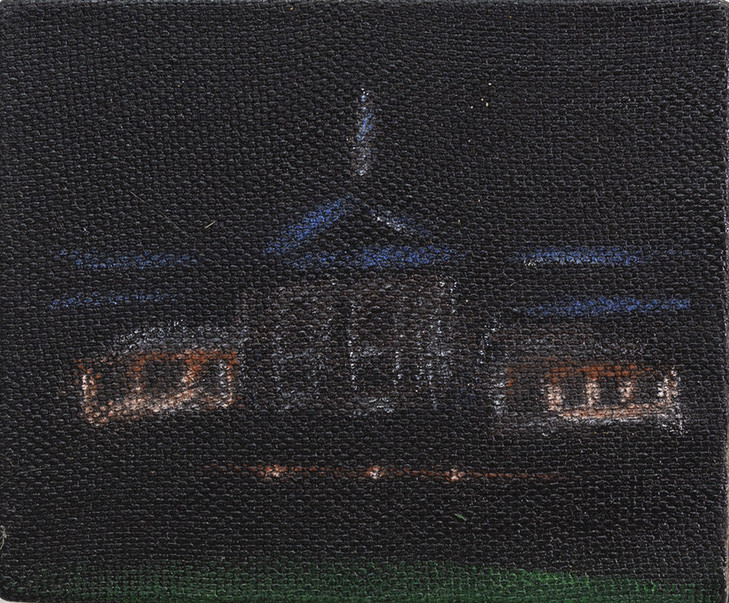 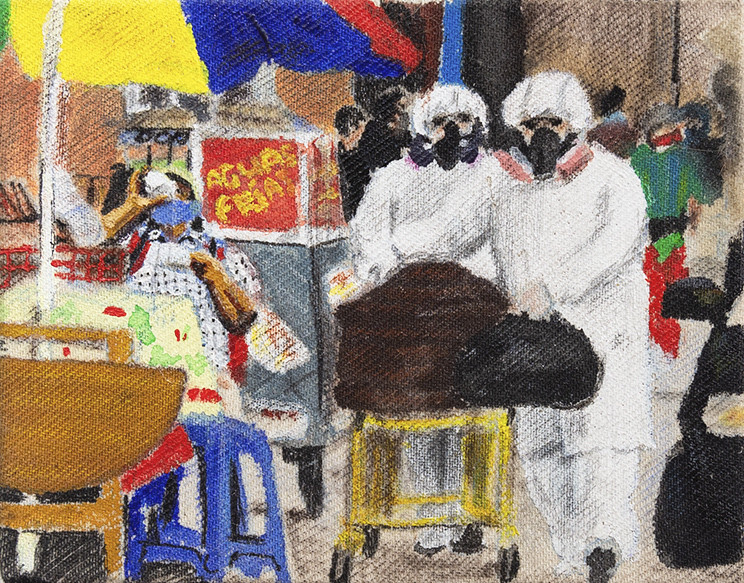 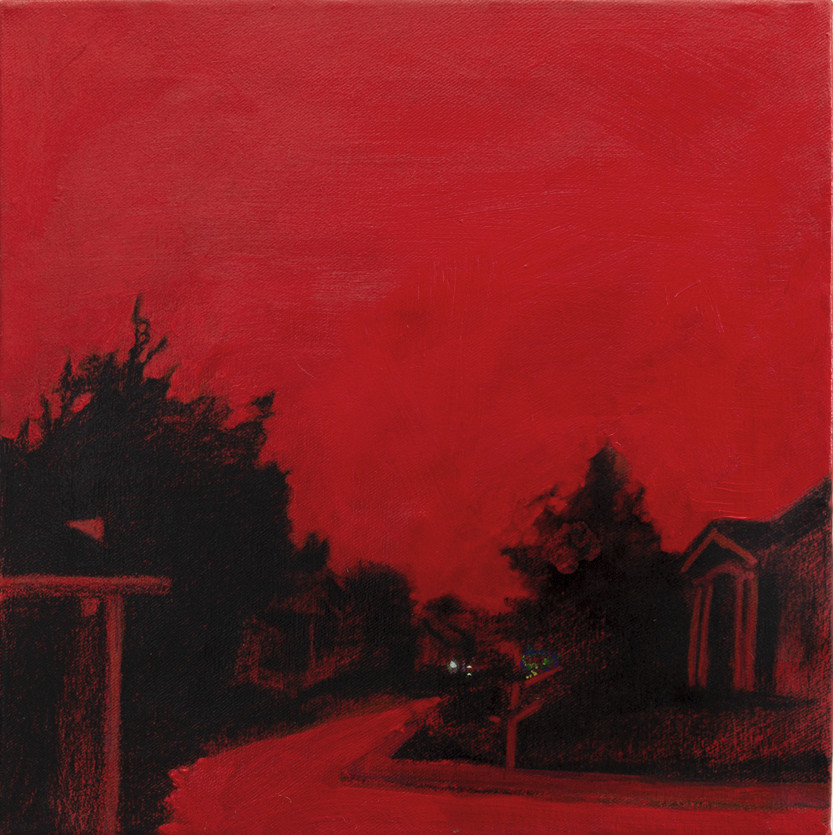 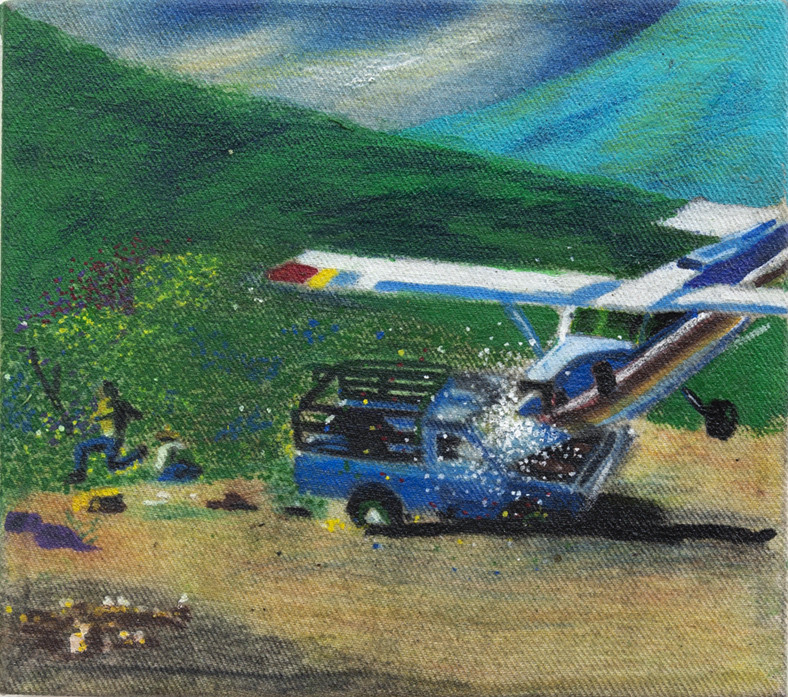 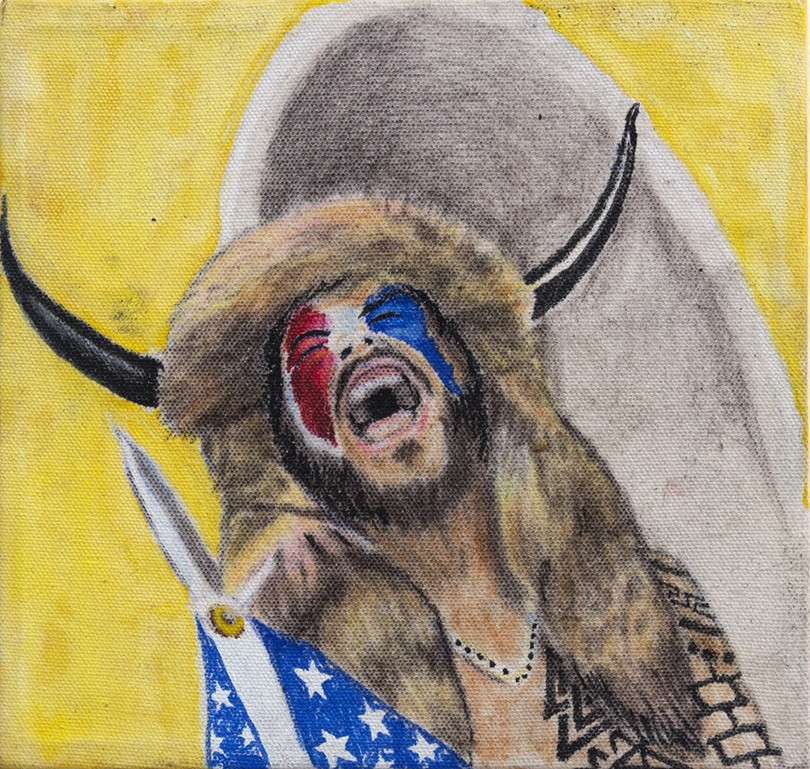 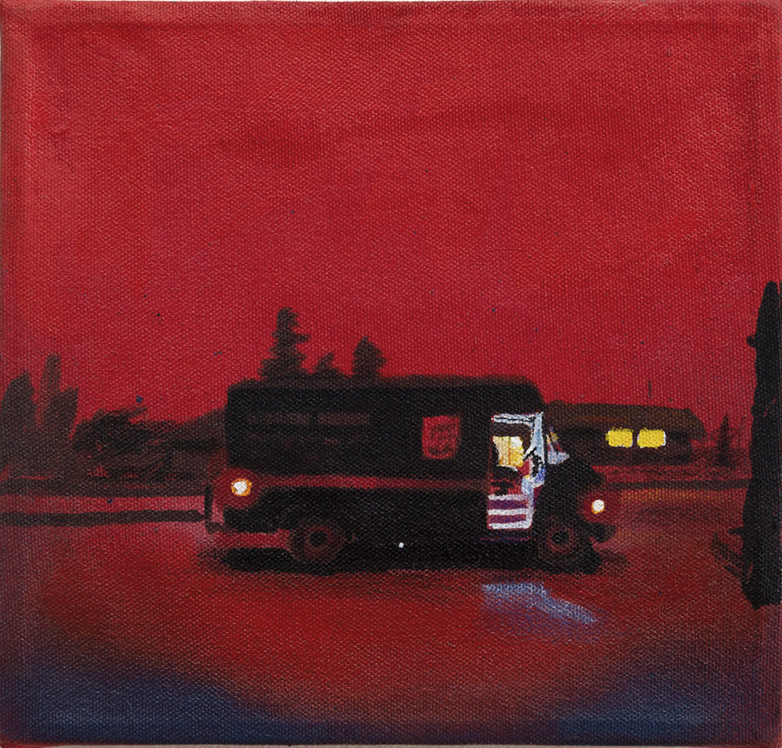 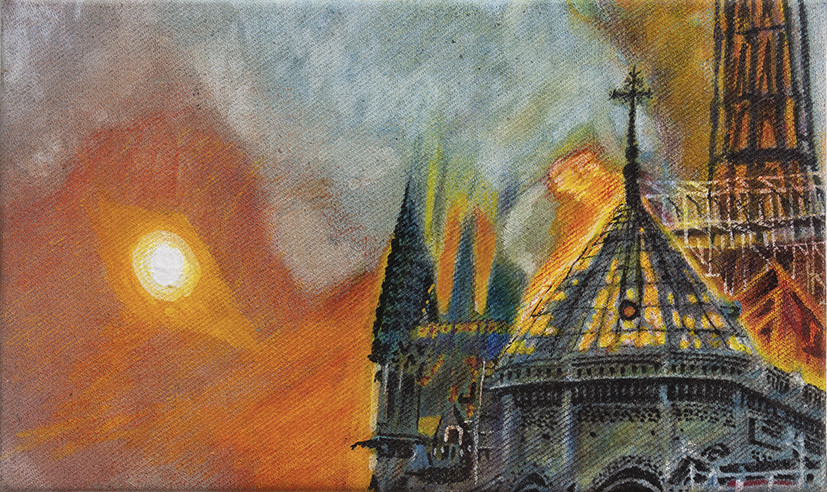 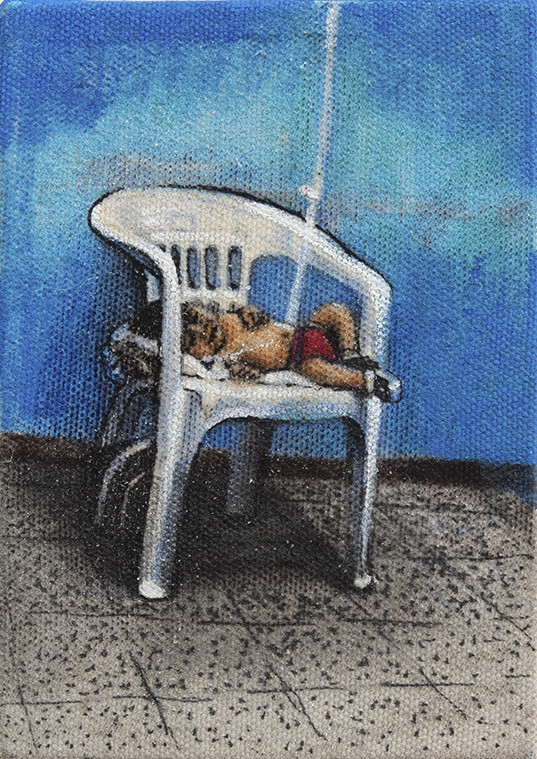 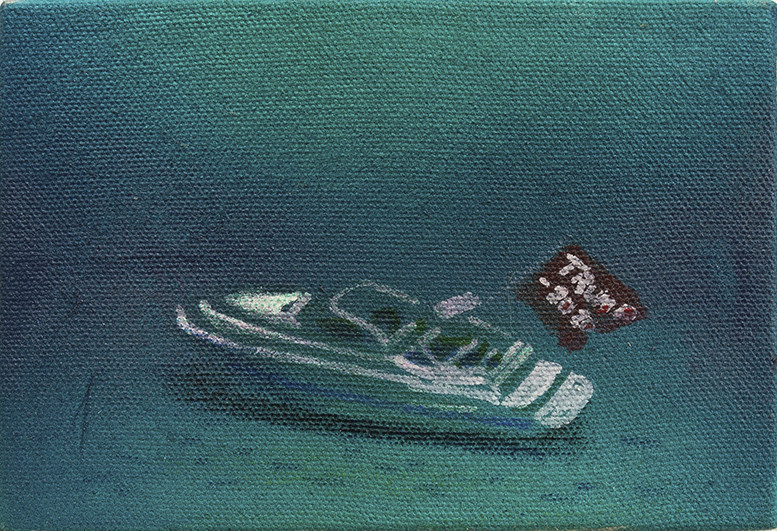 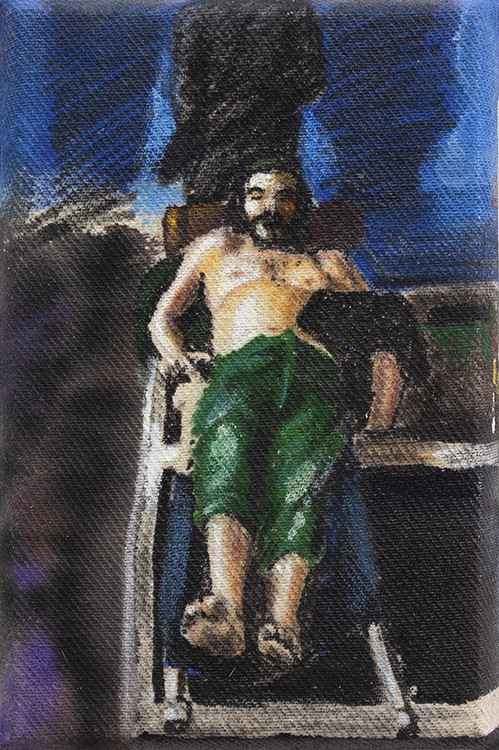 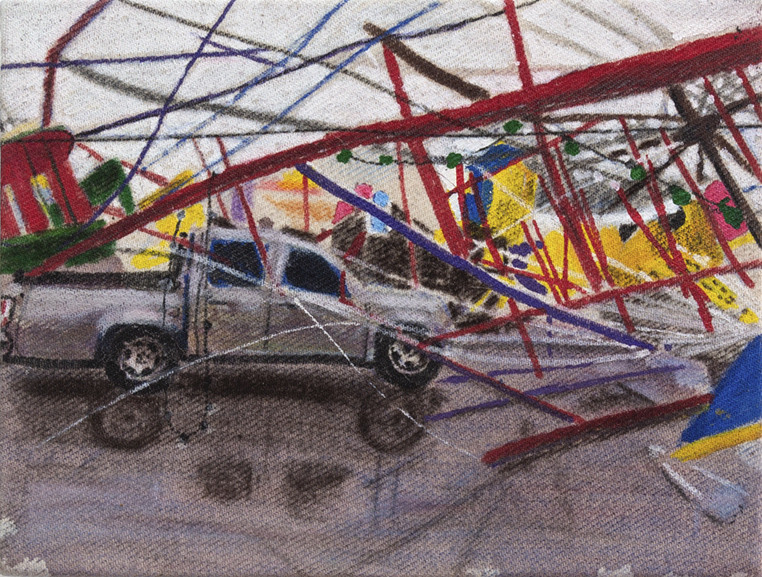 Jorge de León’s series of small-scale paintings hone in on moments of life as they’ve appeared in daily mass media over the past two years. While these images serve to mark the political, environmental, and personal upheaval we’ve experienced across the world during this time—and the ubiquitous quality of its representation brought upon by global press and social media—de León’s painted imagery ultimately records the humanity within these moments, whether joyful, quietly humorous, chaotic, or dire. Continually surveying the pages of local newspapers and international news sources in print and online, de León has accumulated a significant trove of imagery for over twenty years. Using mixed media to paint on raw canvas, de León re-delivers pulp imagery into textured, personalized observations. In this way, his art carries with it a distinct connectivity between not only the artist and the viewer, but between all of us as onlookers and participants in parallel across geographies. The exhibition’s title, The Black Sheep and Other Fables, references the 1969 book by the same name by Augusto Monterroso (born in Honduras, and self-proclaimed Guatemalan) who, although lesser known, is arguably one of the most important Latin American writers of the 20th century. Monterroso and de León share in the sharp sense of dark humor contained in their respective works. (Attached is Monterroso’s original short story, La Oveja Negra.)

As well as working in painting and drawing, de León’s artistic background is in live body art, centered on the (oftentimes violently physical) dynamics of the body in action. These preoccupations arrive in his static work through a repeated foregrounding of the figure against the urban architectures that surround and structure its daily movements. Bold formal choices and contrasts in light, color palette, and movement carry the intensity of each moment frozen in time. On a personal level, de León makes art to better understand the complexities of systemic violence in the region, from its root causes—including the key role of the United States in leading a Coup d'Etat in Guatemala in 1954 against democratically elected president Jacobo Árbenz, which led to one of the most horrific civil wars in Latin America from 1960-1996—to his personal experiences in delictive activities across his troubled youth. de León first learned to draw by tattooing when he was young, followed by art school before embarking on his artistic career. Today, his works offer intimate moments for pause and reflection upon the idiosyncrasies of urban life, opening up a potential new space of imagination toward how we arrive to and comprehend such events and our individual parts in them.

In a far-off country many years ago there lived a Black Sheep.
They shot him.
A century later, the repentant flock erected an equestrian statue of him, which looked very good in the park.
From then on, every time Black Sheep appeared they were promptly executed so that future generations of common, ordinary sheep could also indulge in sculpture.