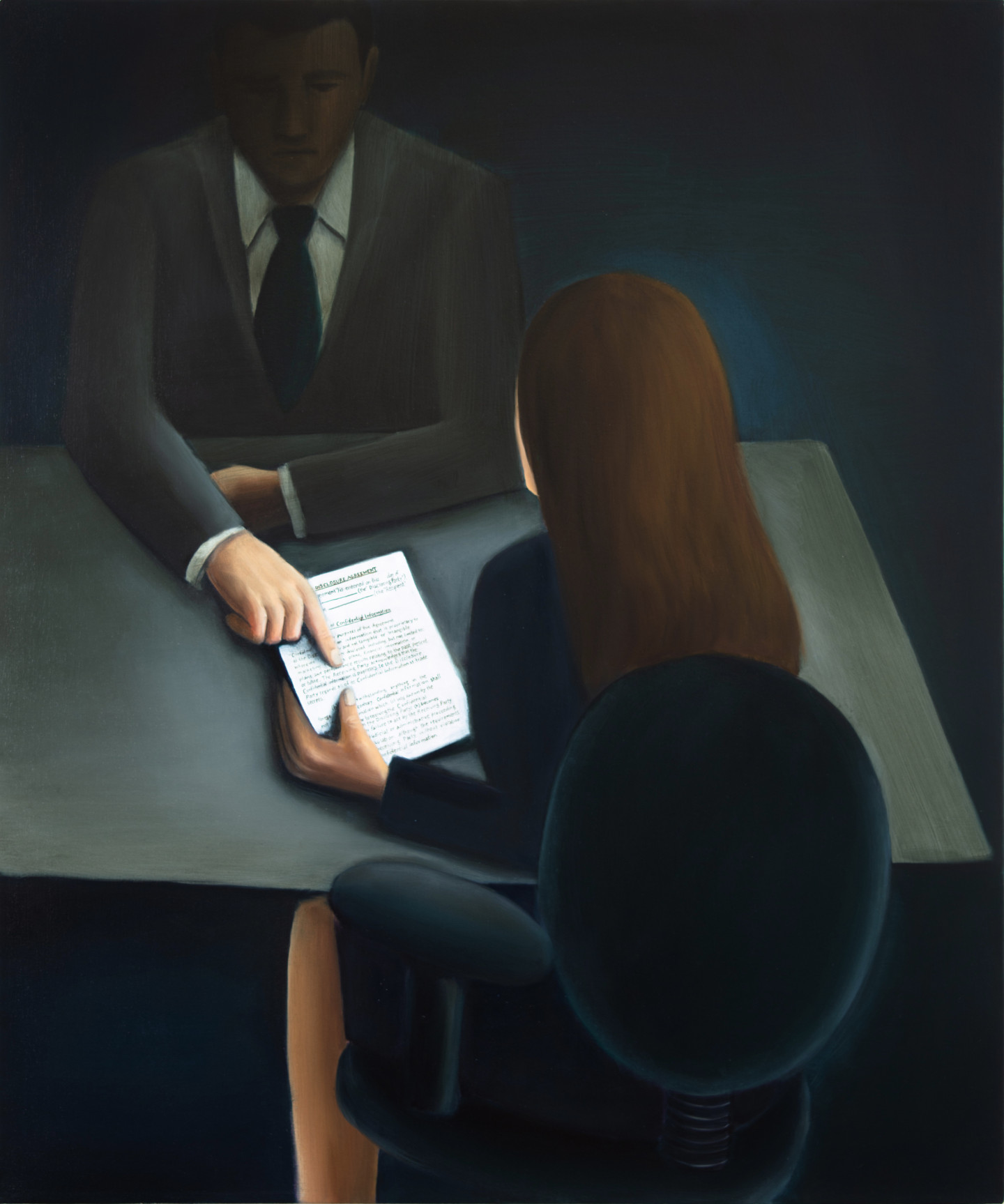 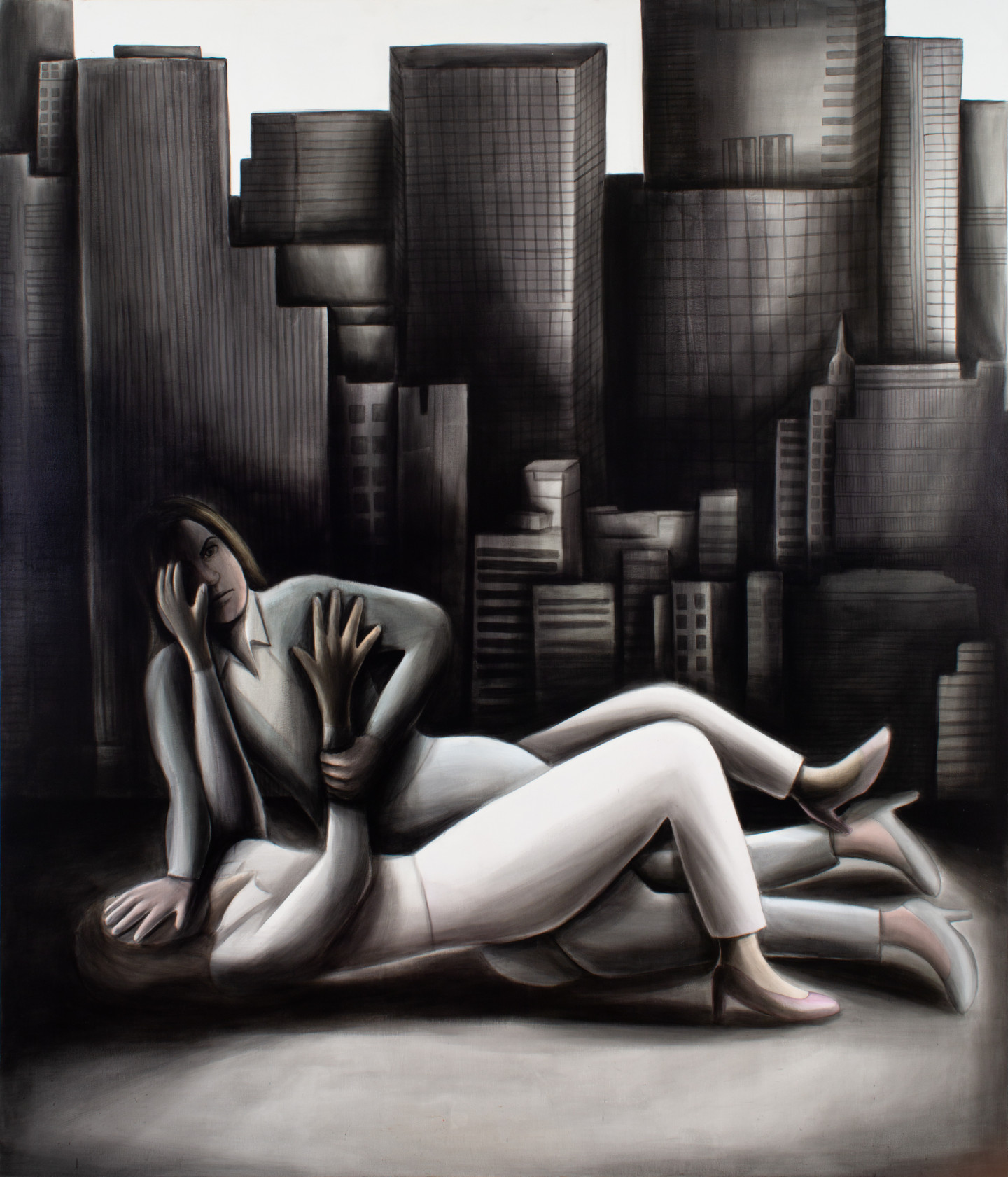 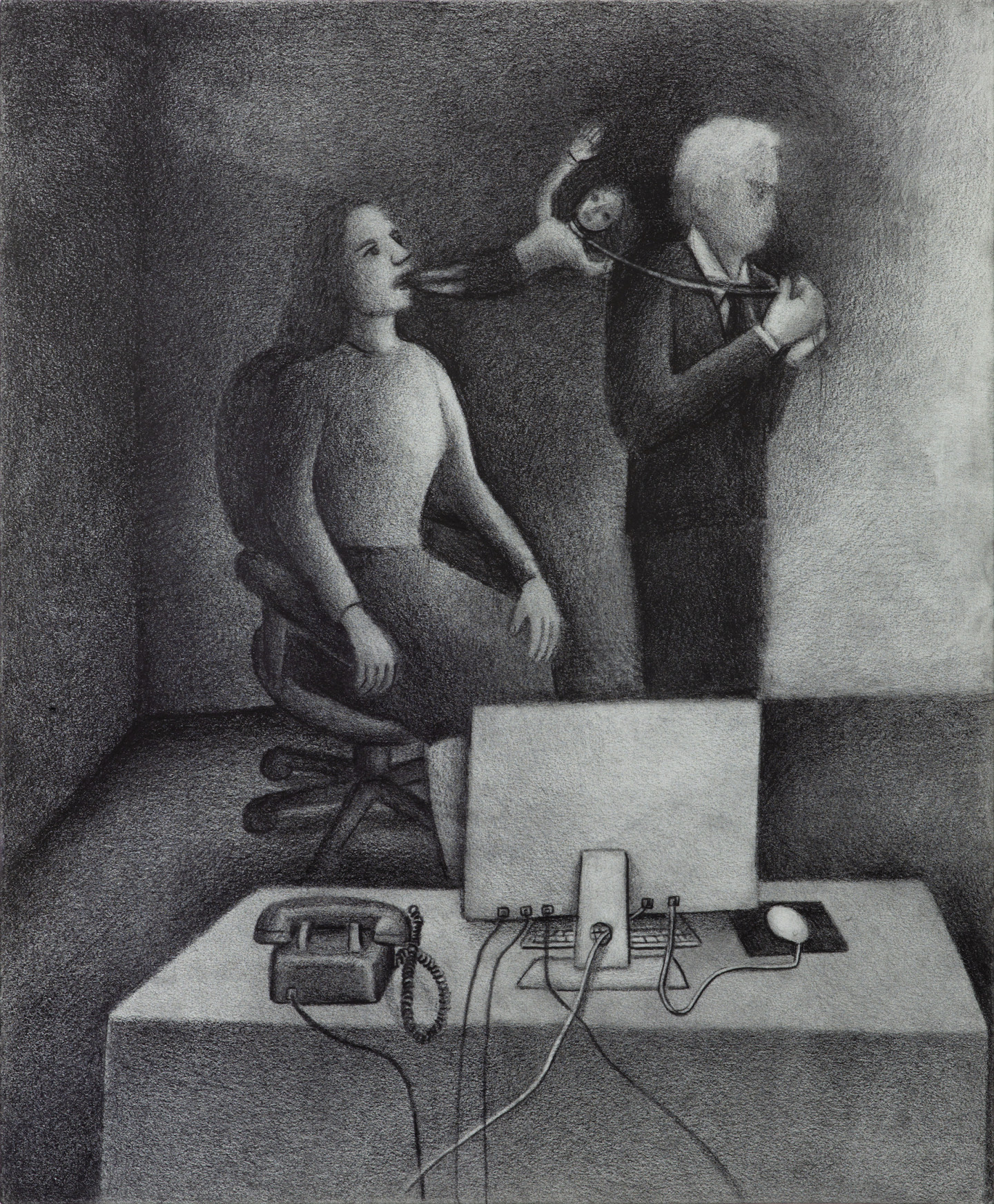 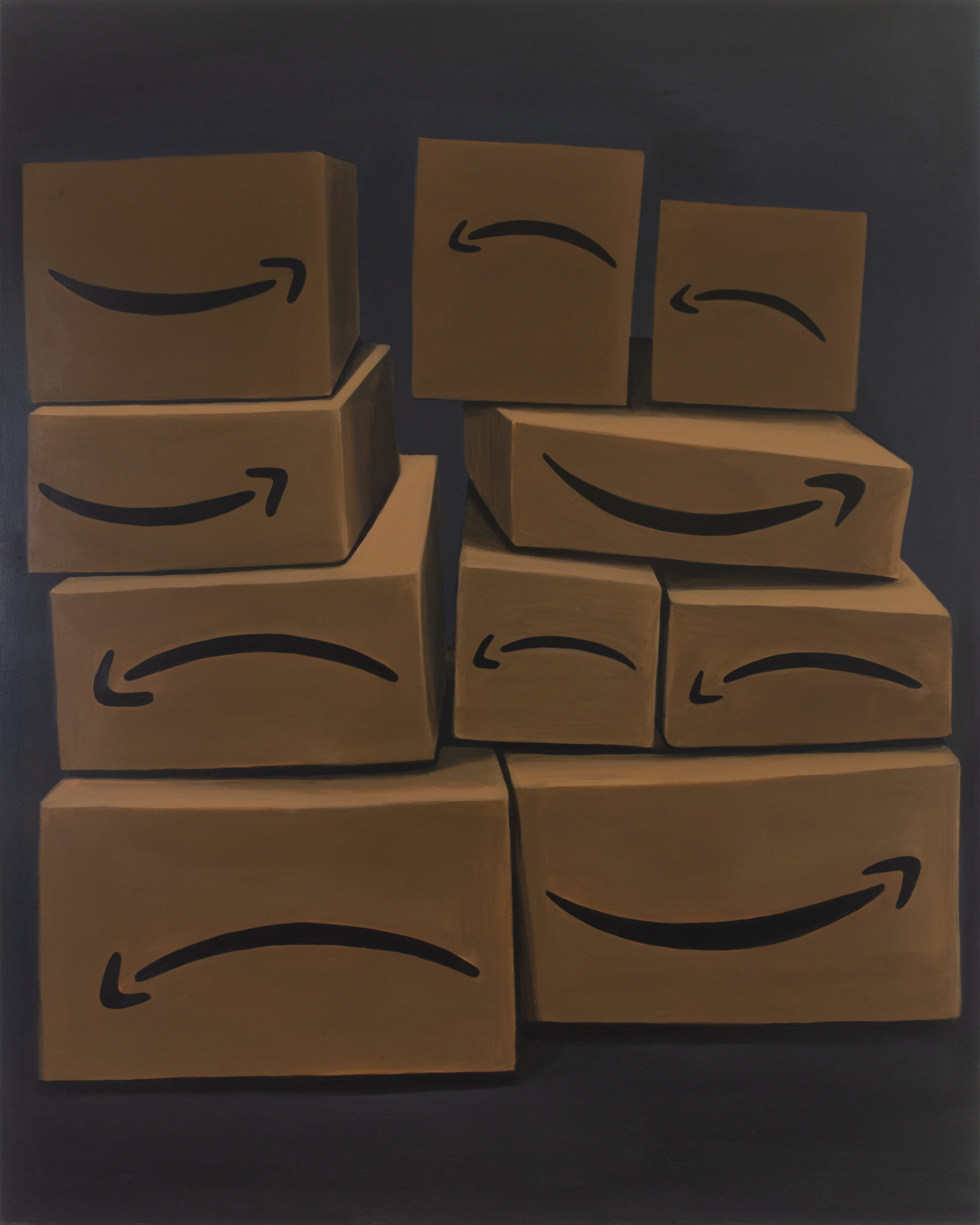 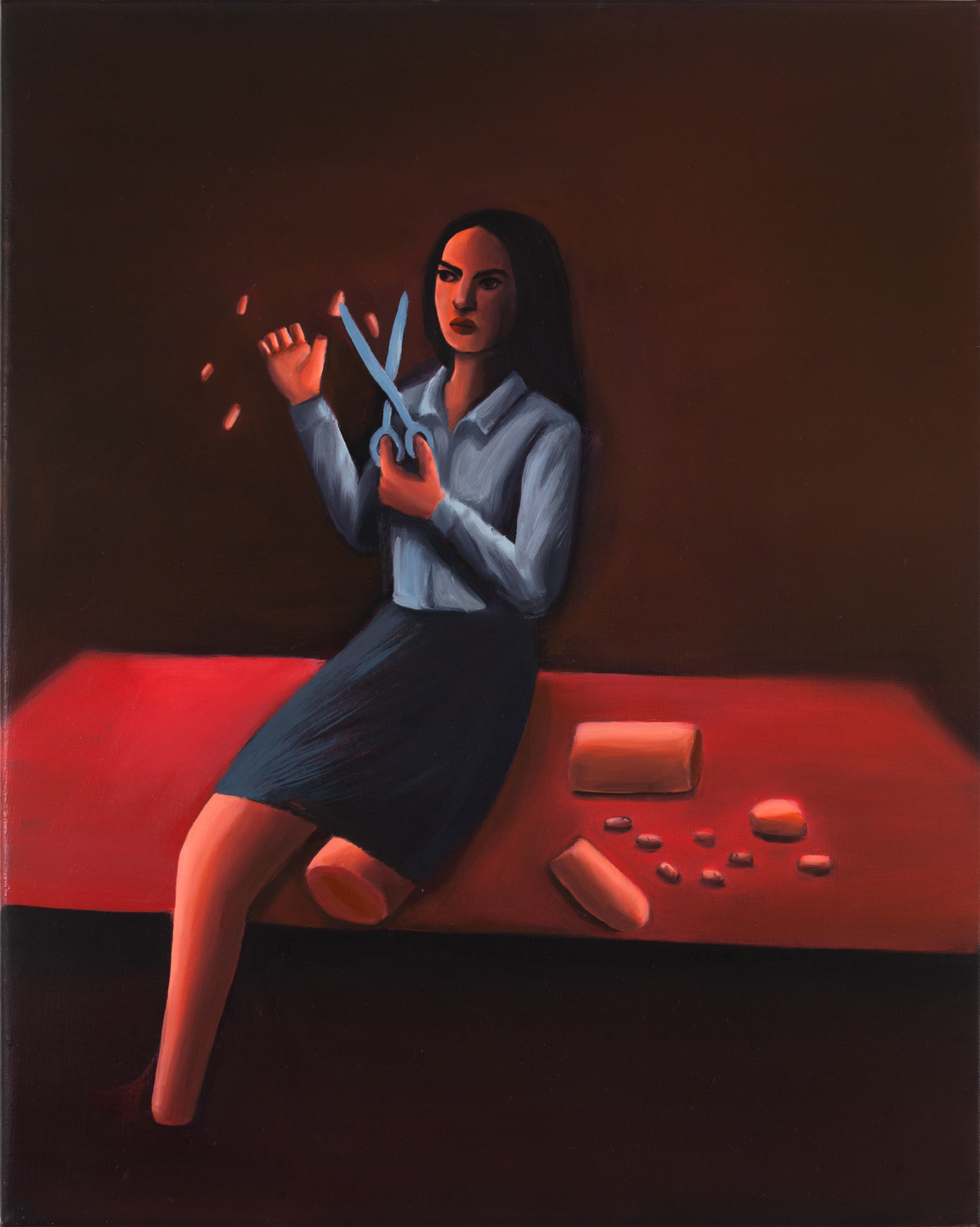 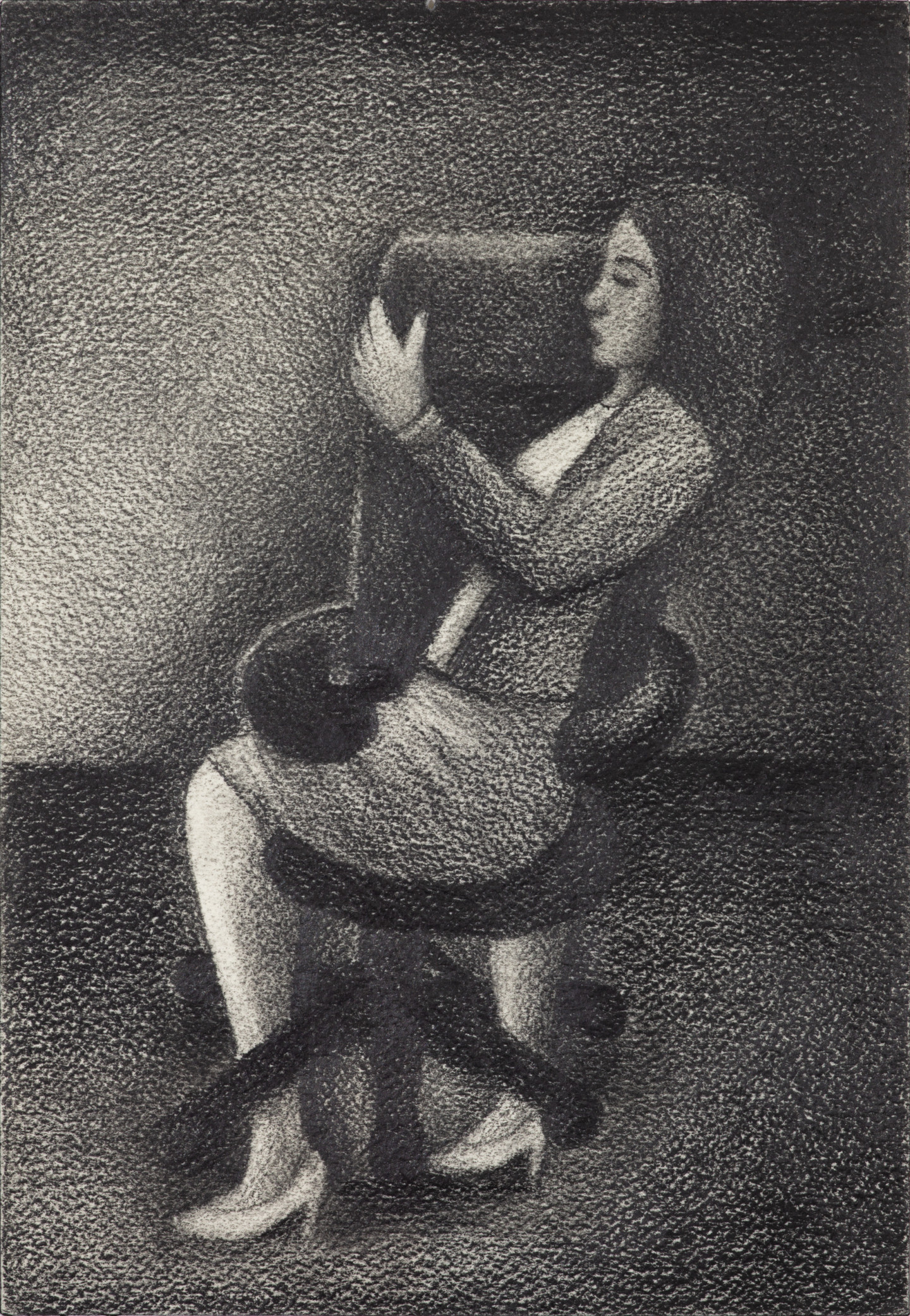 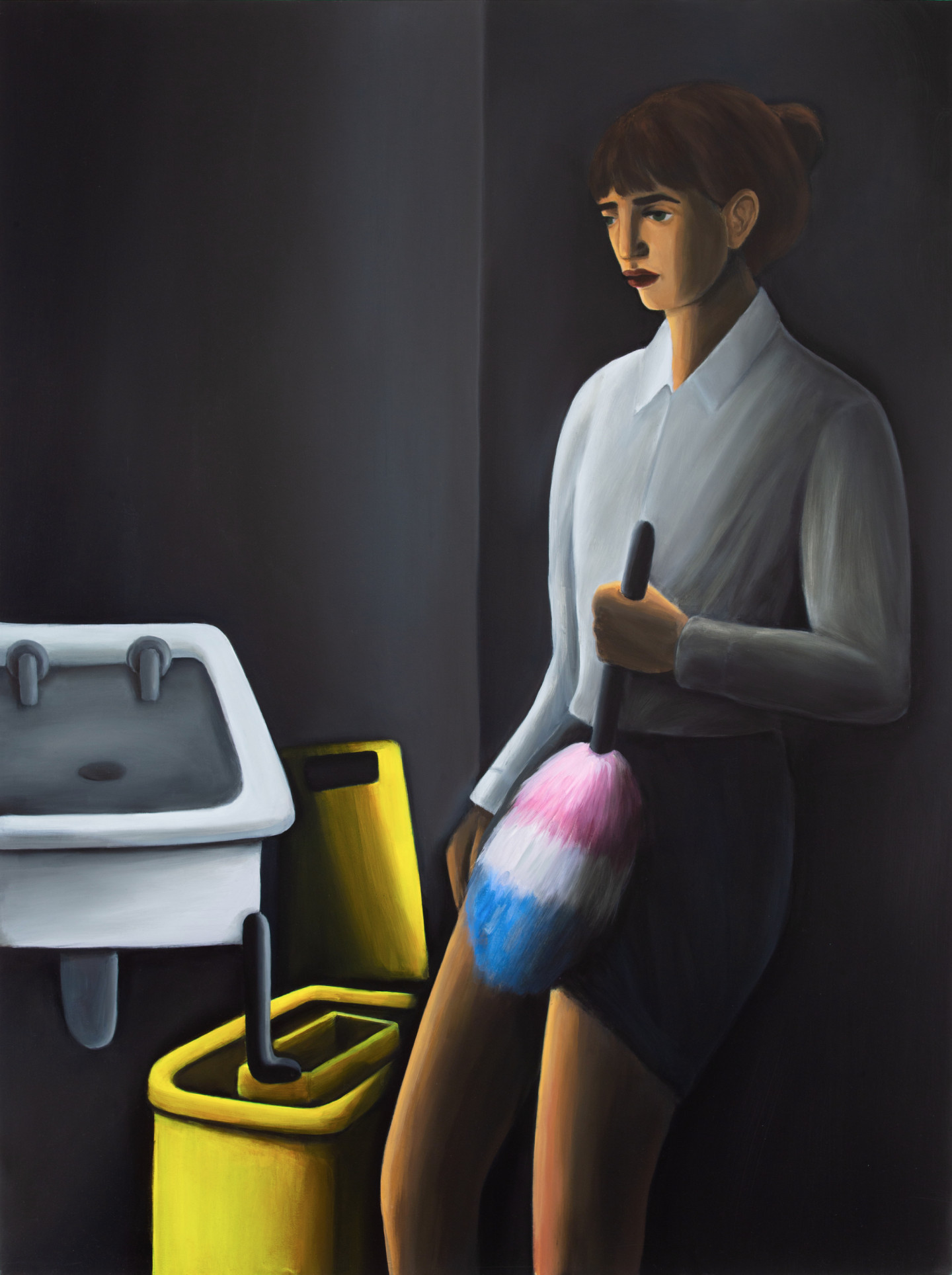 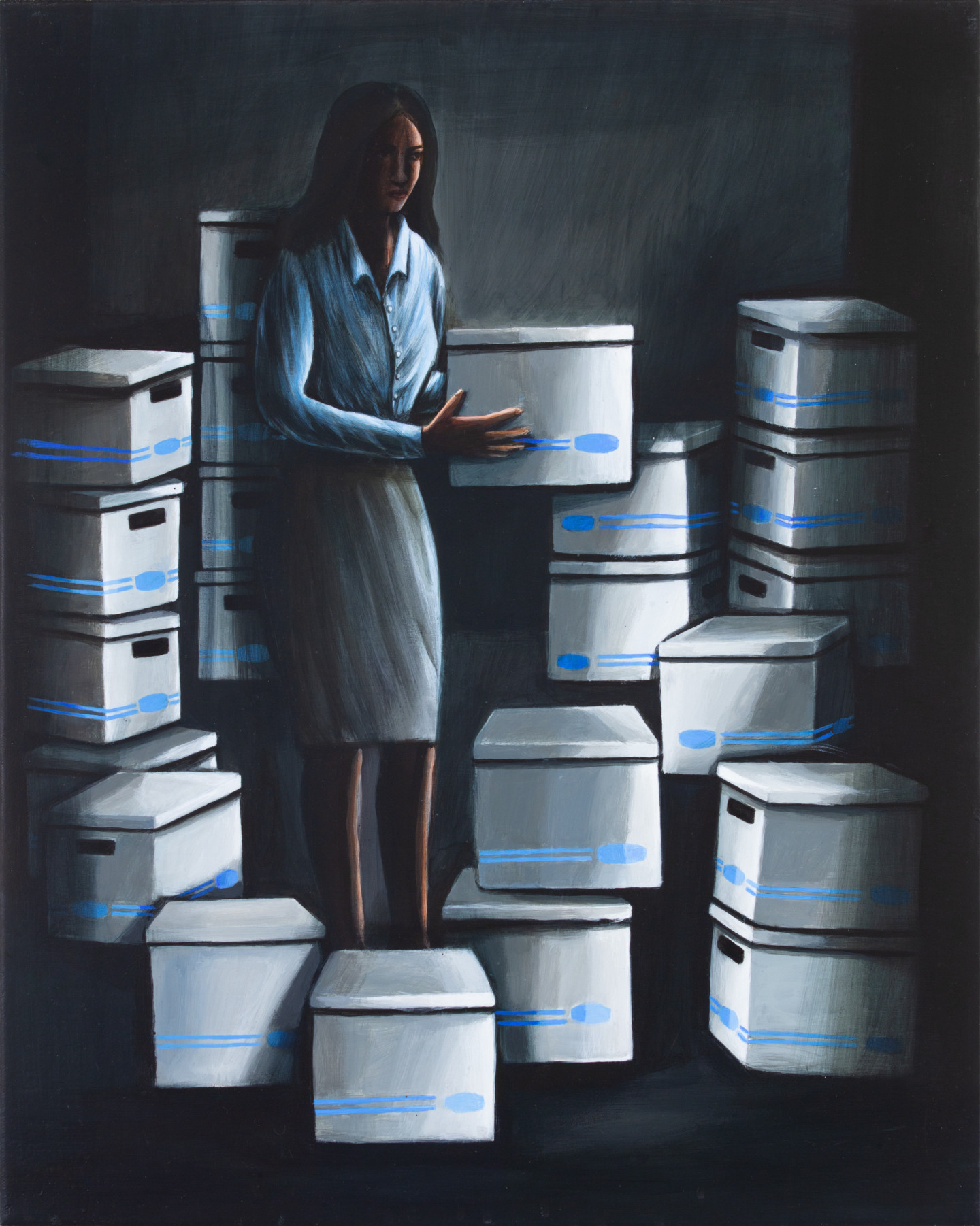 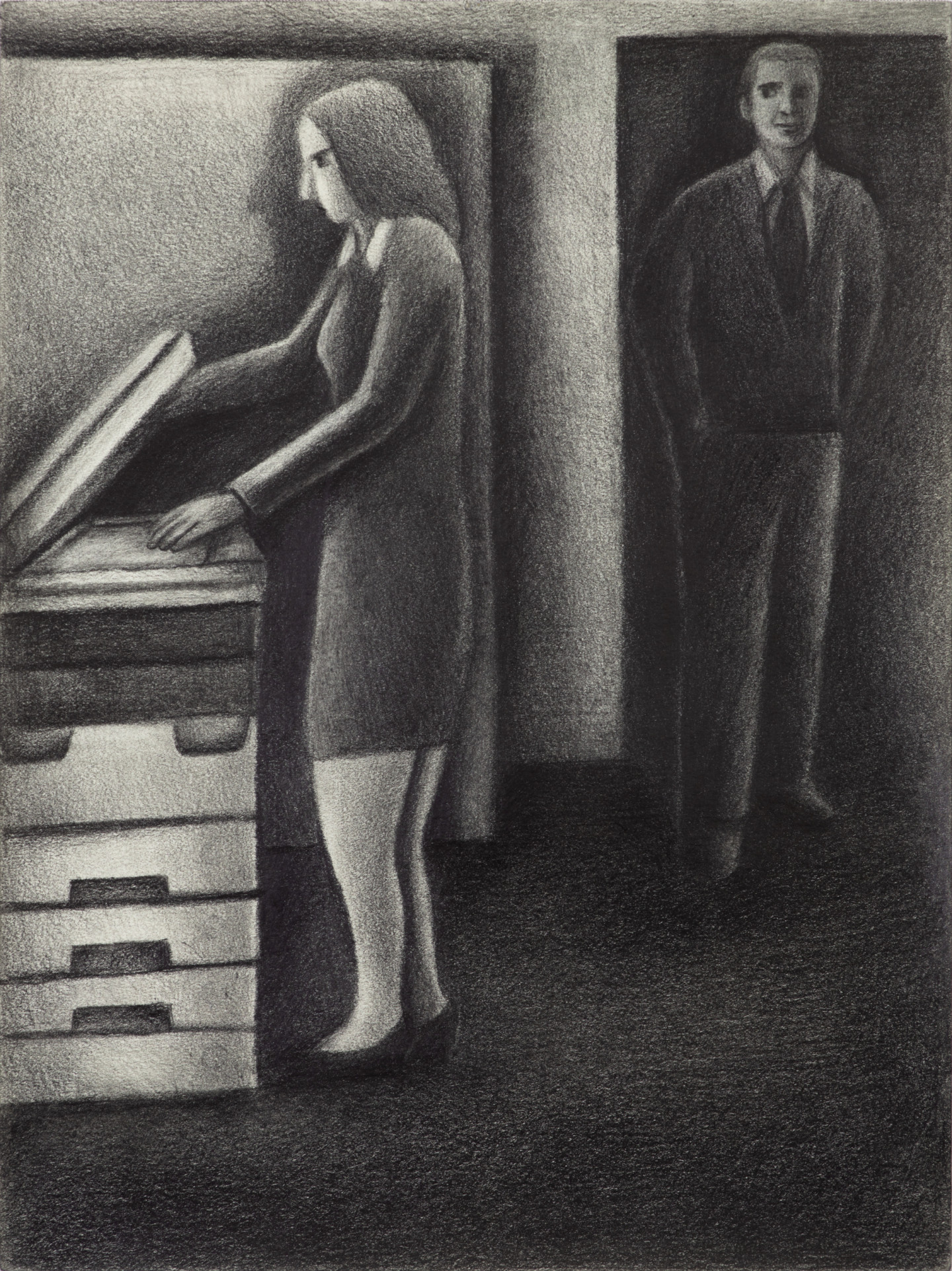 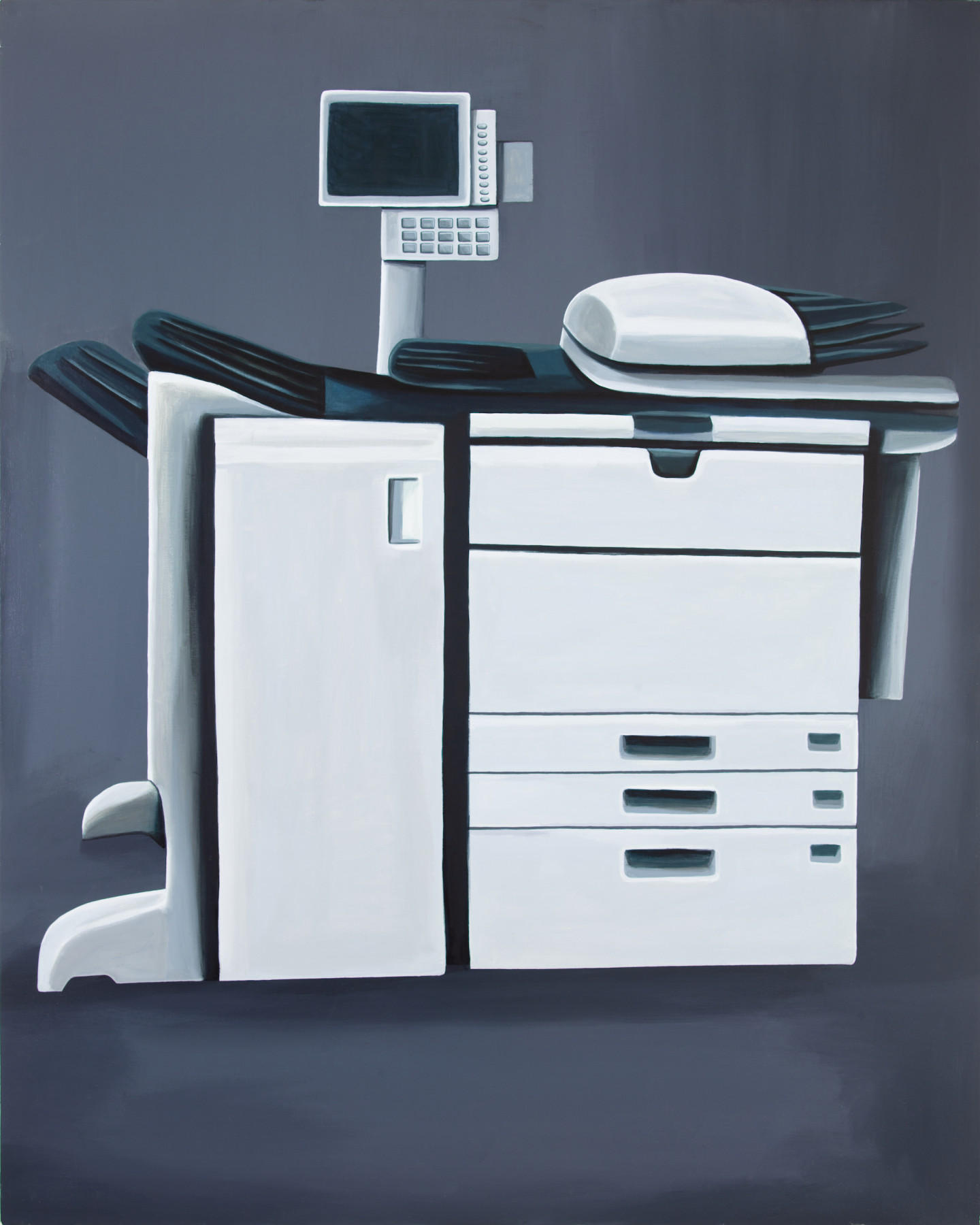 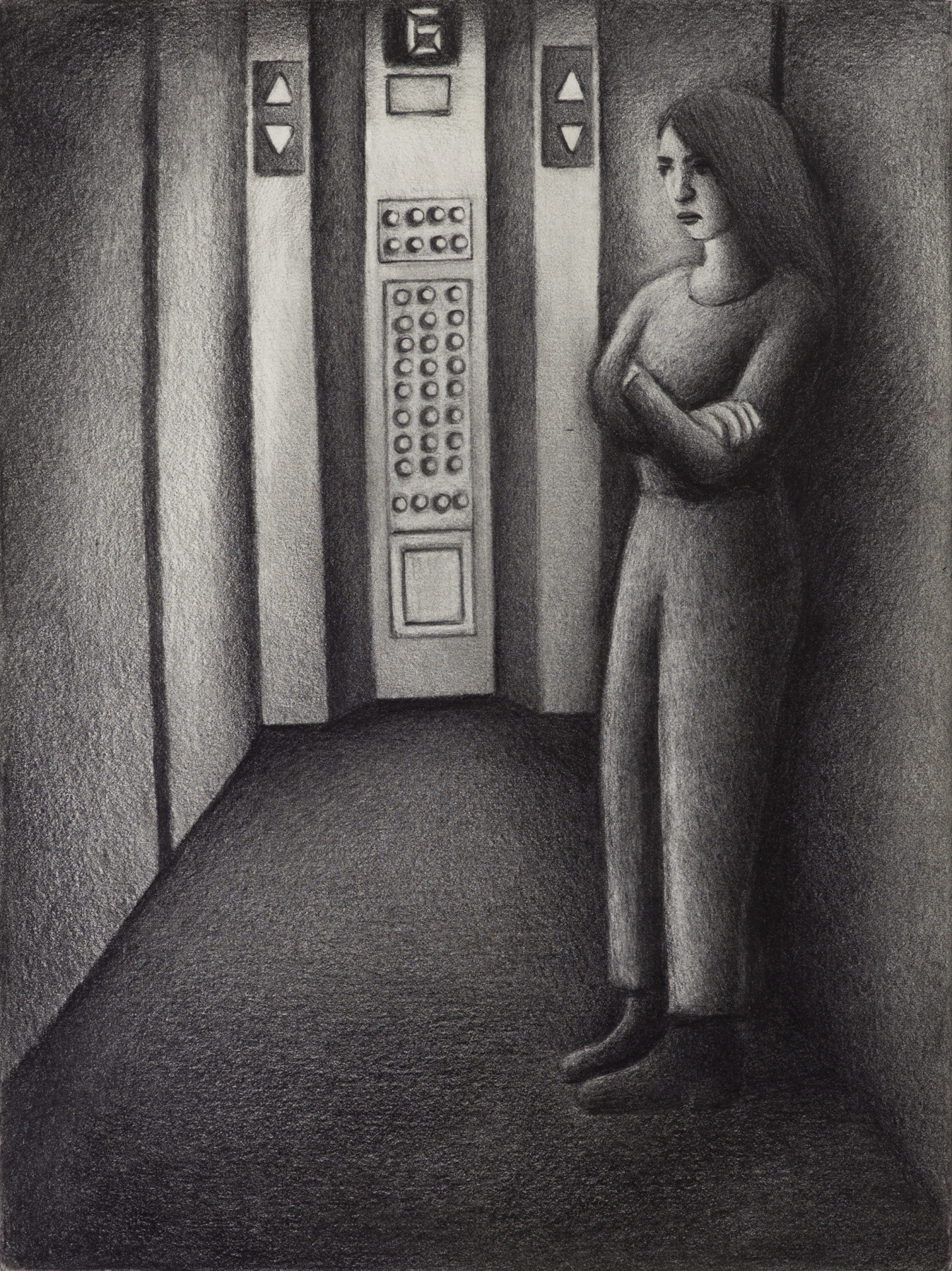 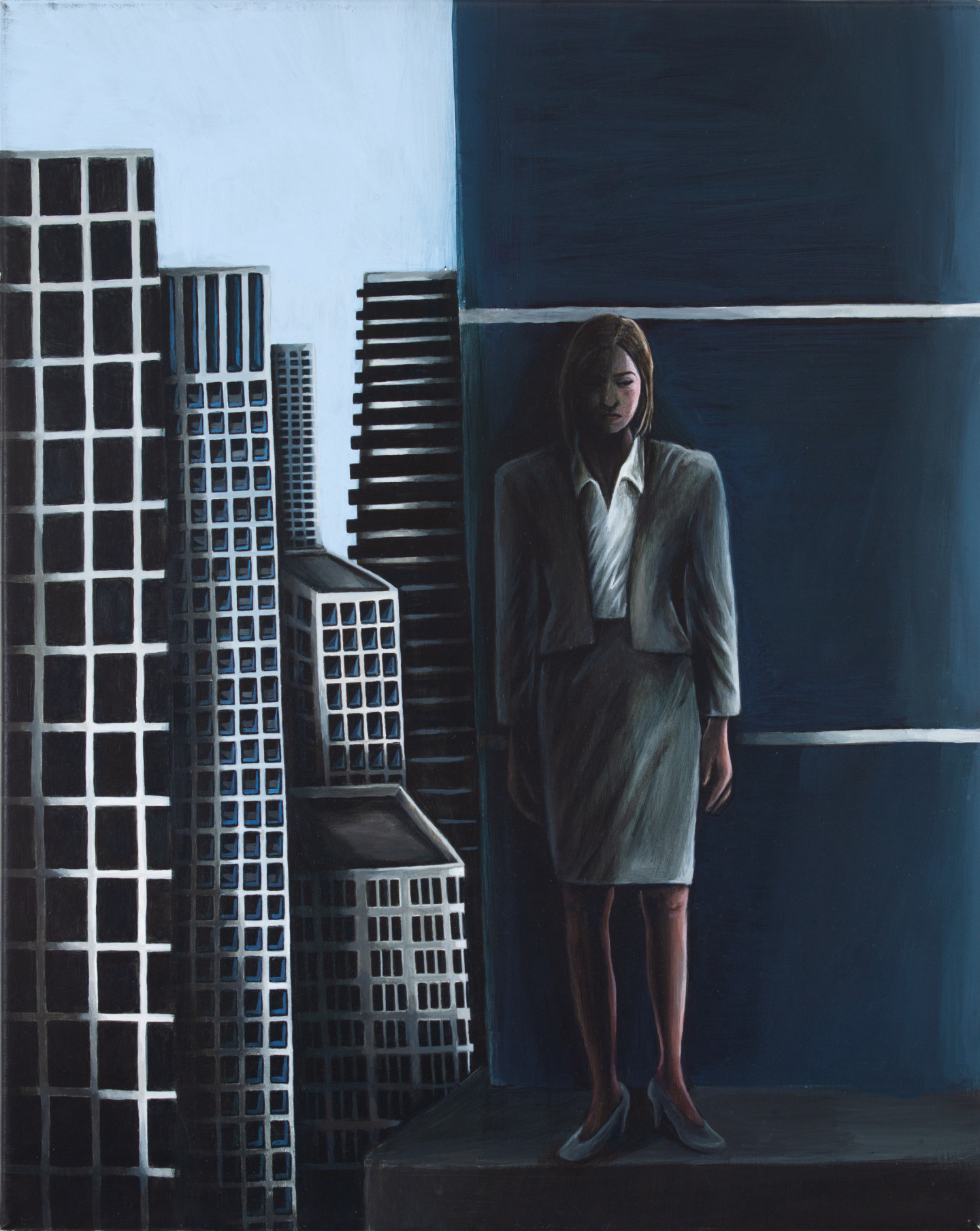 The work of Vanessa Gully Santiago seems to be located in a lucid dream, as if pulled fresh from the imagination into the image we encounter. Created over the past three years, Young Professional presents a body of work that configures desire, despair, and alienation within a corporate office setting. Inside these scenes, strange moments transpire in a space full of shadows. In some, the figure is cornered by the architecture that contains her, if not by another person. In others, she encircles herself with devices and containers. A sense of void space and suspended time is produced, in which all action is caught in stillness and silence. Much like the term “young professional,” these subjects and the objects they interact with function as proxies within a far broader psychic and political space.

Gully Santiago’s paintings might simply describe a person’s experience at work, were the activity within them not often extreme or impossible. Instead, we are transferred into an intense psychological space that is at once claustrophobic and reaches across time and place. Despite the circumstances, the characters are almost always deadpan. In some works, objects become the subject, which in turn reflect their own strange blankness. Approaching a monochromatic palette, flashes of color appear as if to indicate the acute emotion that lies within the surface of her images. Just as the figures that appear here, Gully Santiago’s works are deeply charged with the desire to escape.

Vanessa Gully Santiago (b. 1984 Boston, MA, lives and works in Queens, NY) received her BFA from Cooper Union and MFA from Rutgers University. She has exhibited in solo and group presentations at Jack Barrett Gallery, Thierry Goldberg Gallery, American Medium, Marinaro Gallery, Helena Anrather, JTT, Foxy Production, and Smart Objects, among others. Her work has been written about in Artforum and Forbes, and she has been in residence at the Vermont Studio Center and Byrdcliffe Art Colony.

Laura Brown (b. 1993, KZN, South Africa, lives in New York, NY) is a writer, editor, and curator. She received her MA from the Center for Curatorial Studies at Bard College. She has presented projects at Participant Inc, James Fuentes, Hessel Museum of Art, The Kitchen, and AIR Gallery in New York; Kayne Griffin Corcoran and Actual Size in Los Angeles; and West Space, Melbourne, among others. She is published in BOMB, Mousse, Flash Art, X-TRA Quarterly, Cultured, AQNB, and Contemporary Art Review Los Angeles.