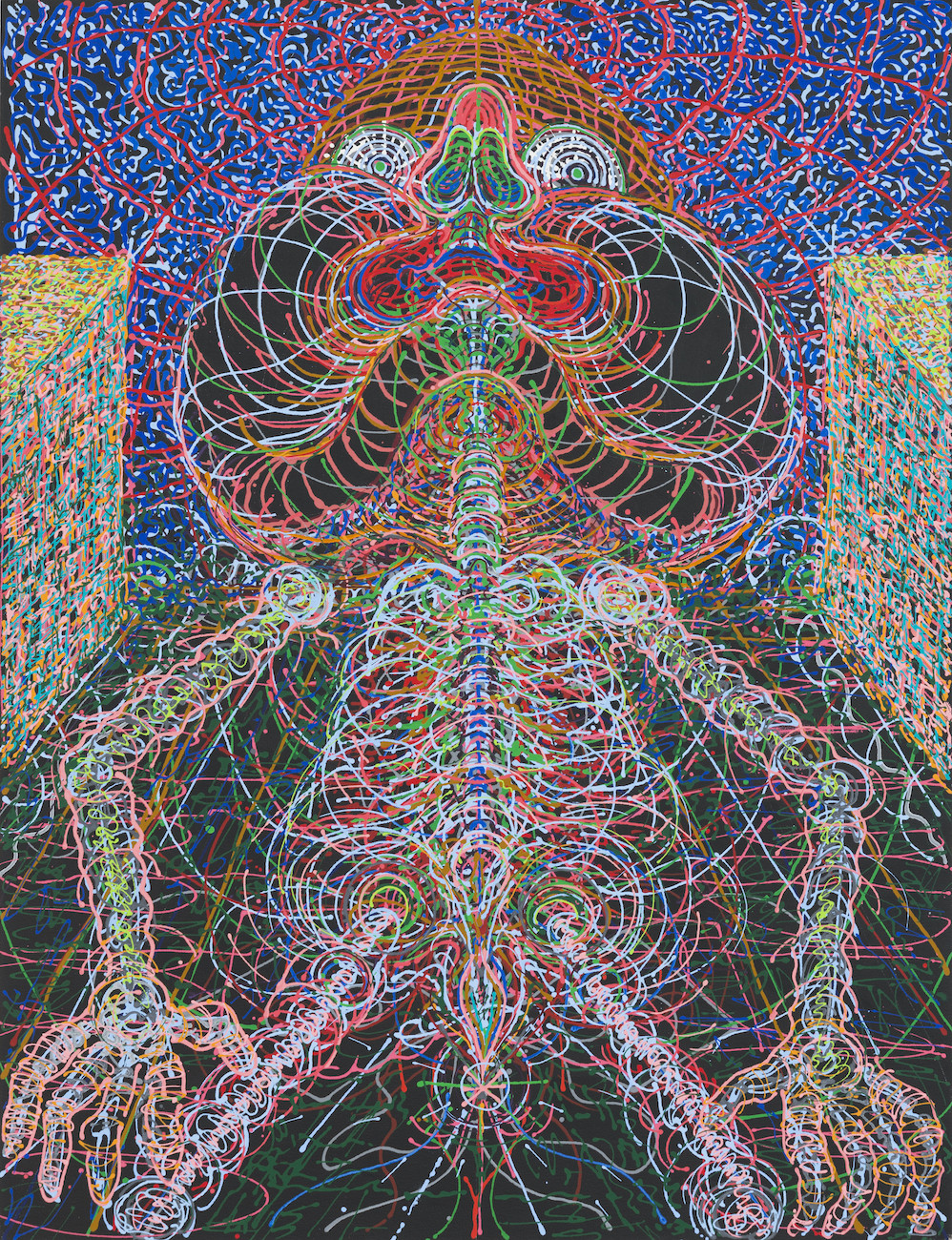 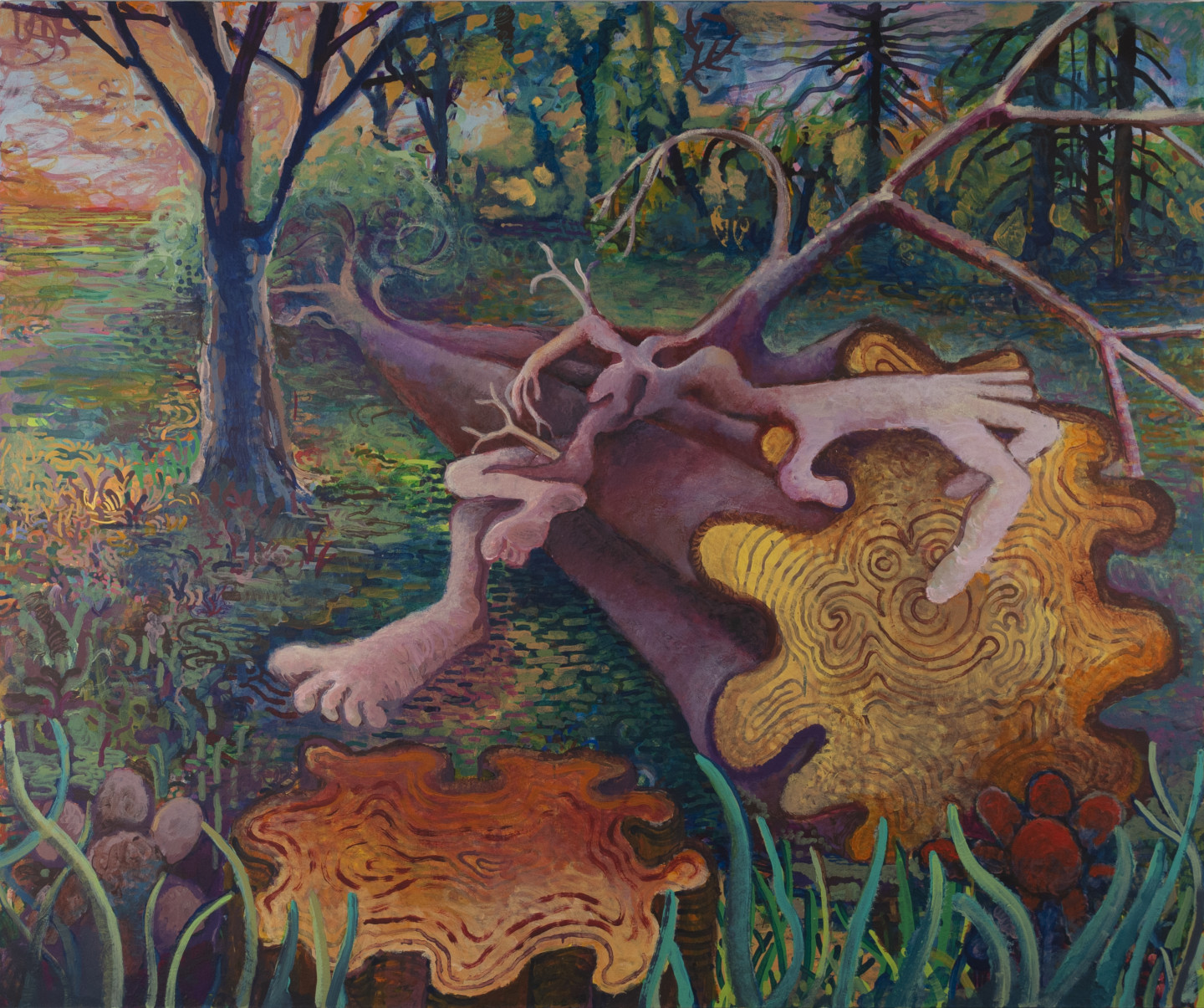 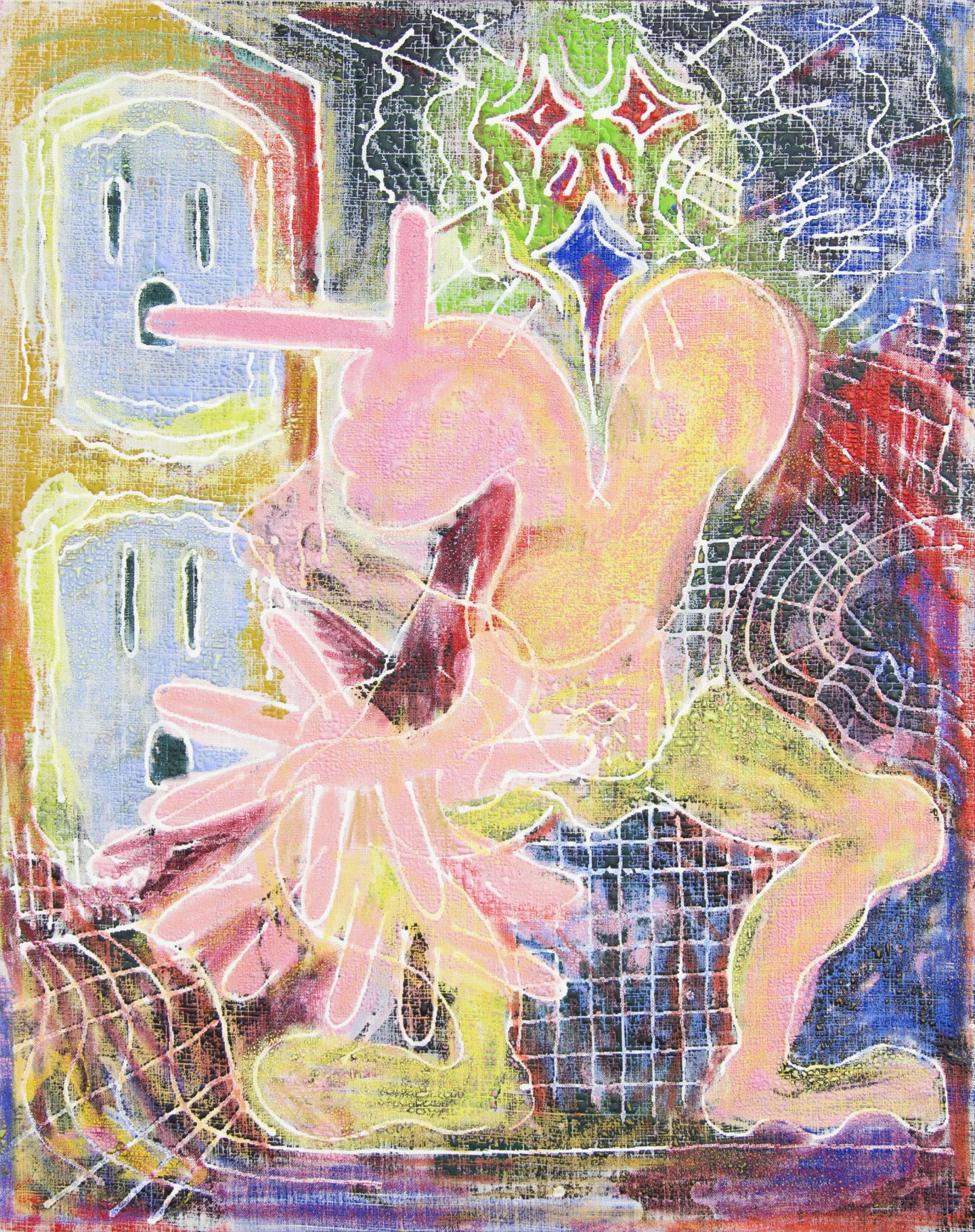 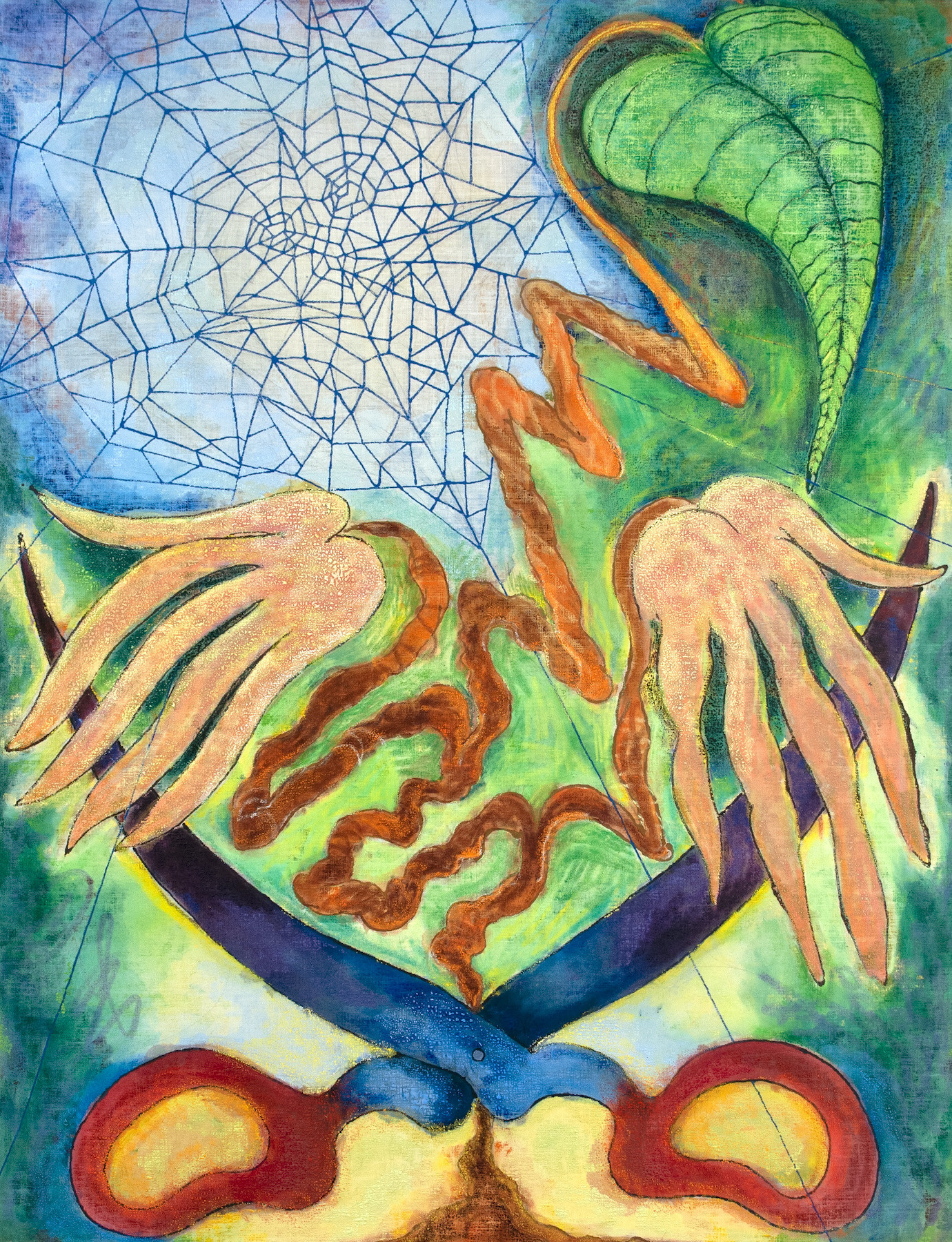 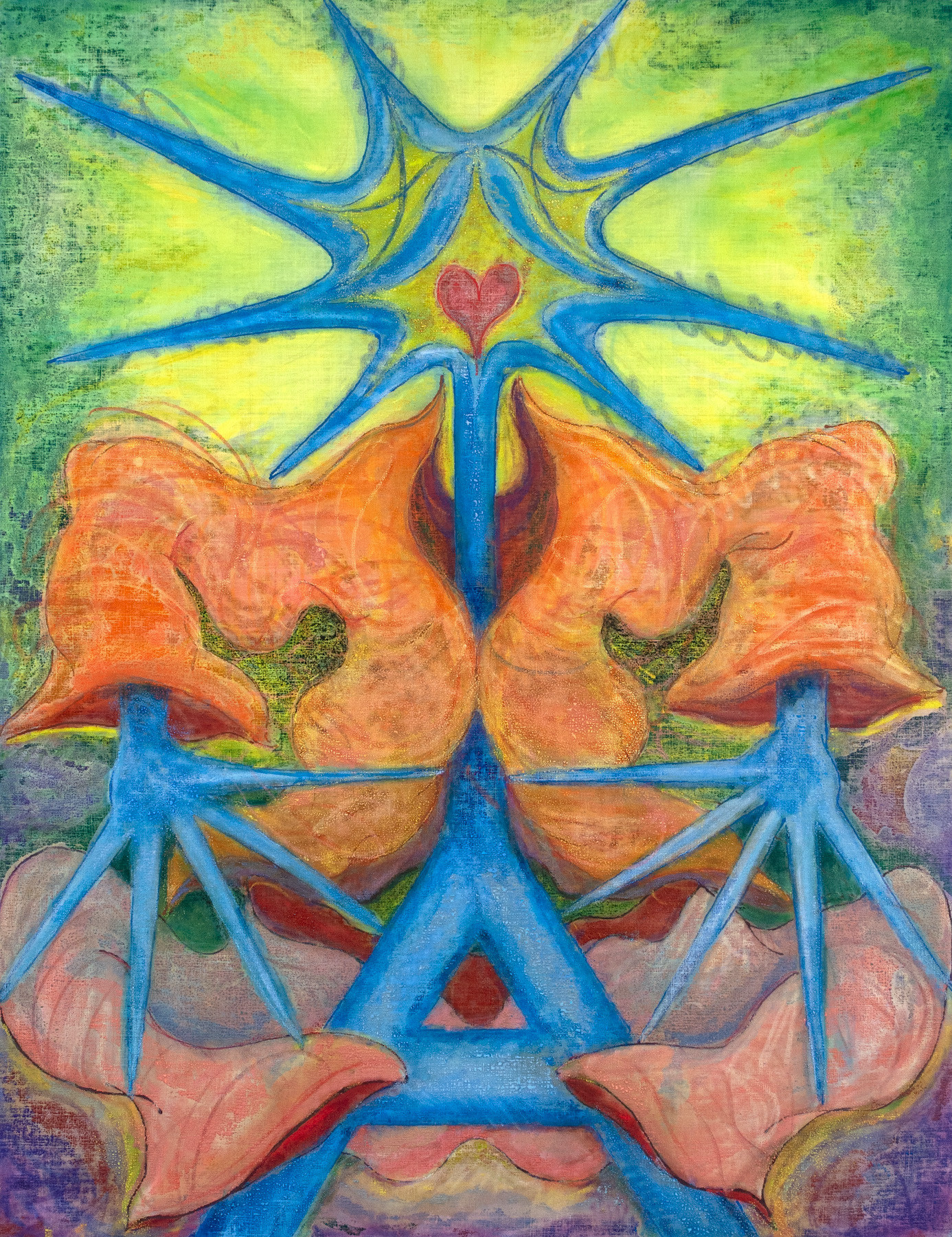 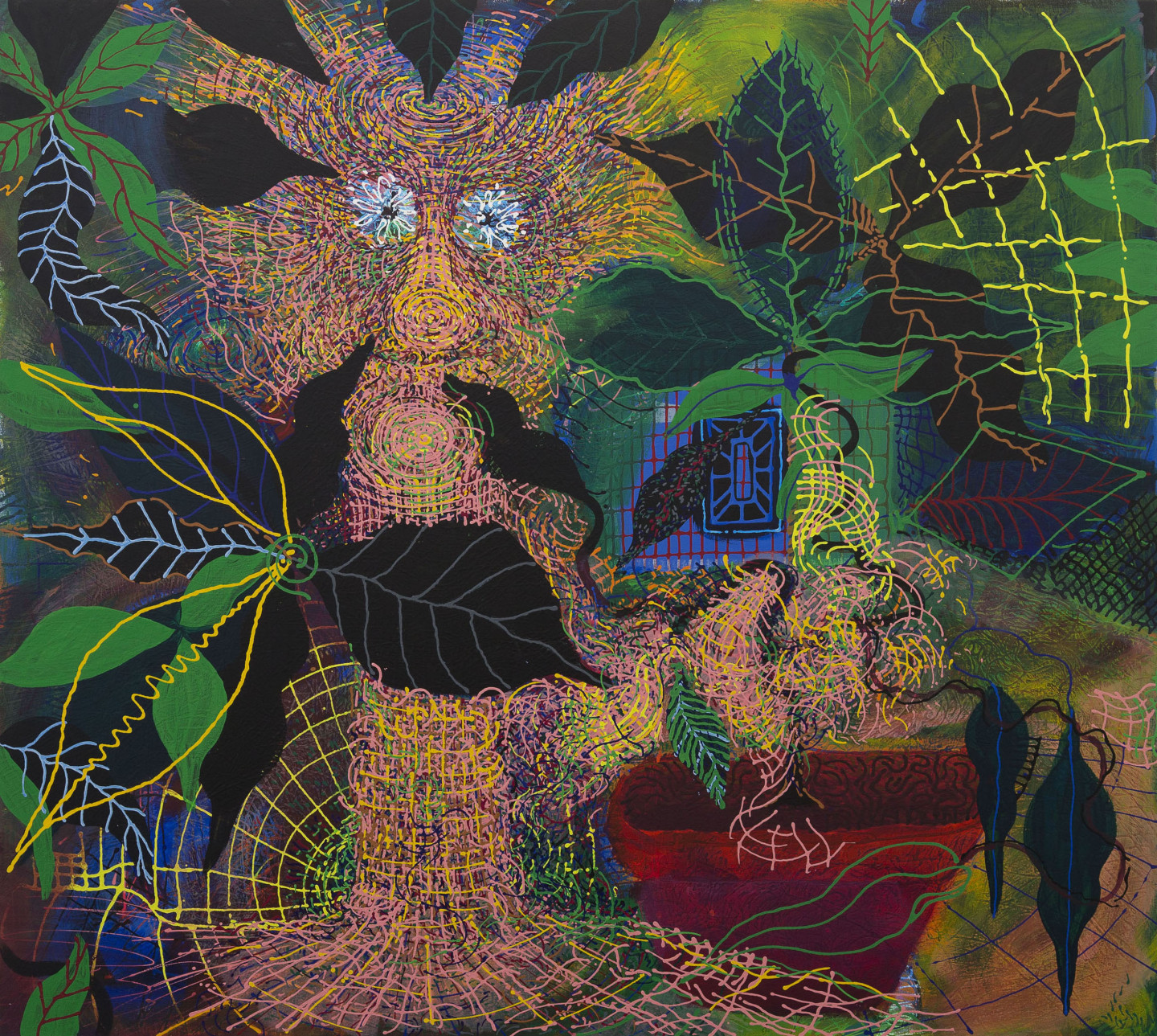 Andy Cahill, Too Much Snake, Not Enough Grass, 2016 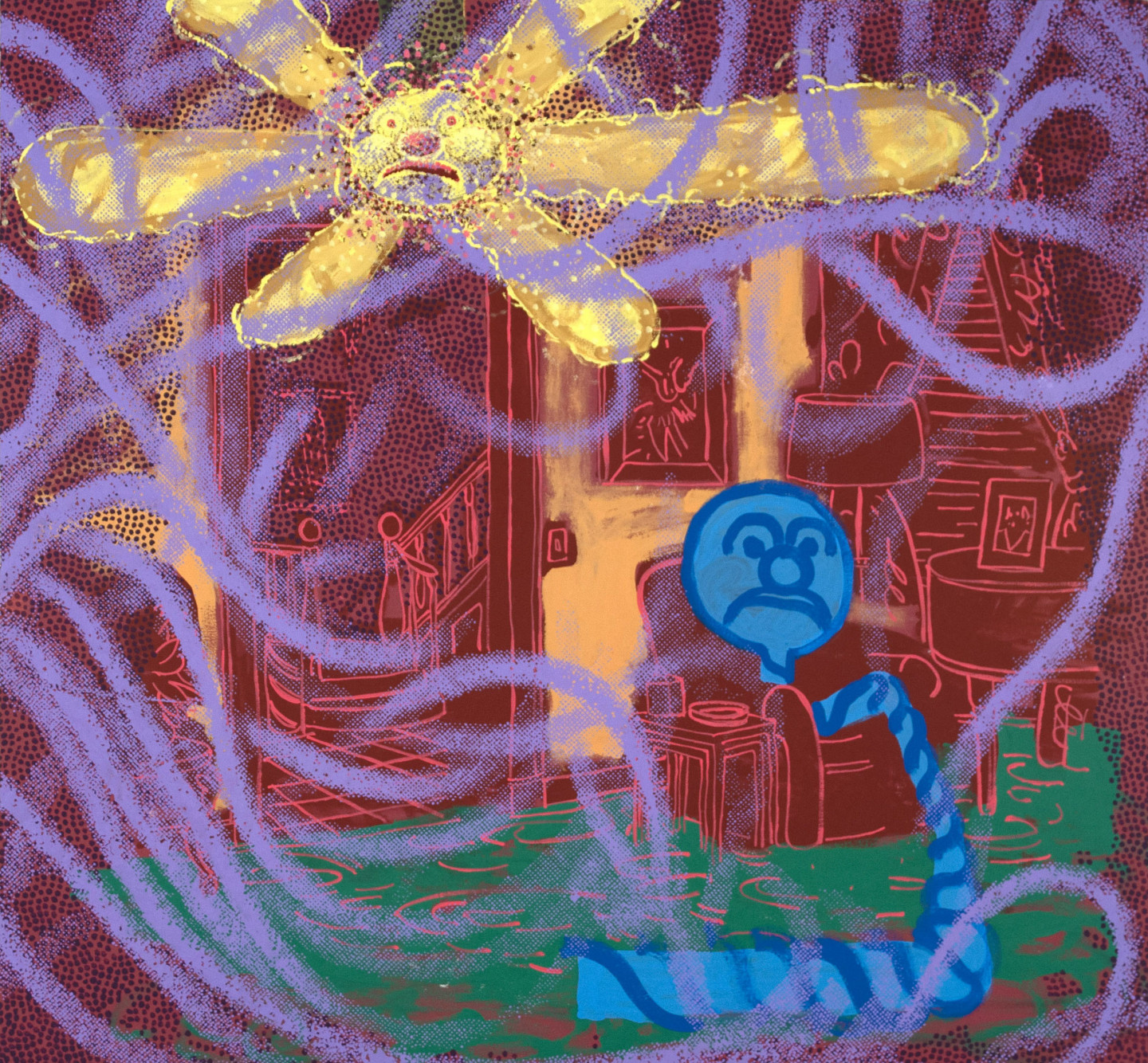 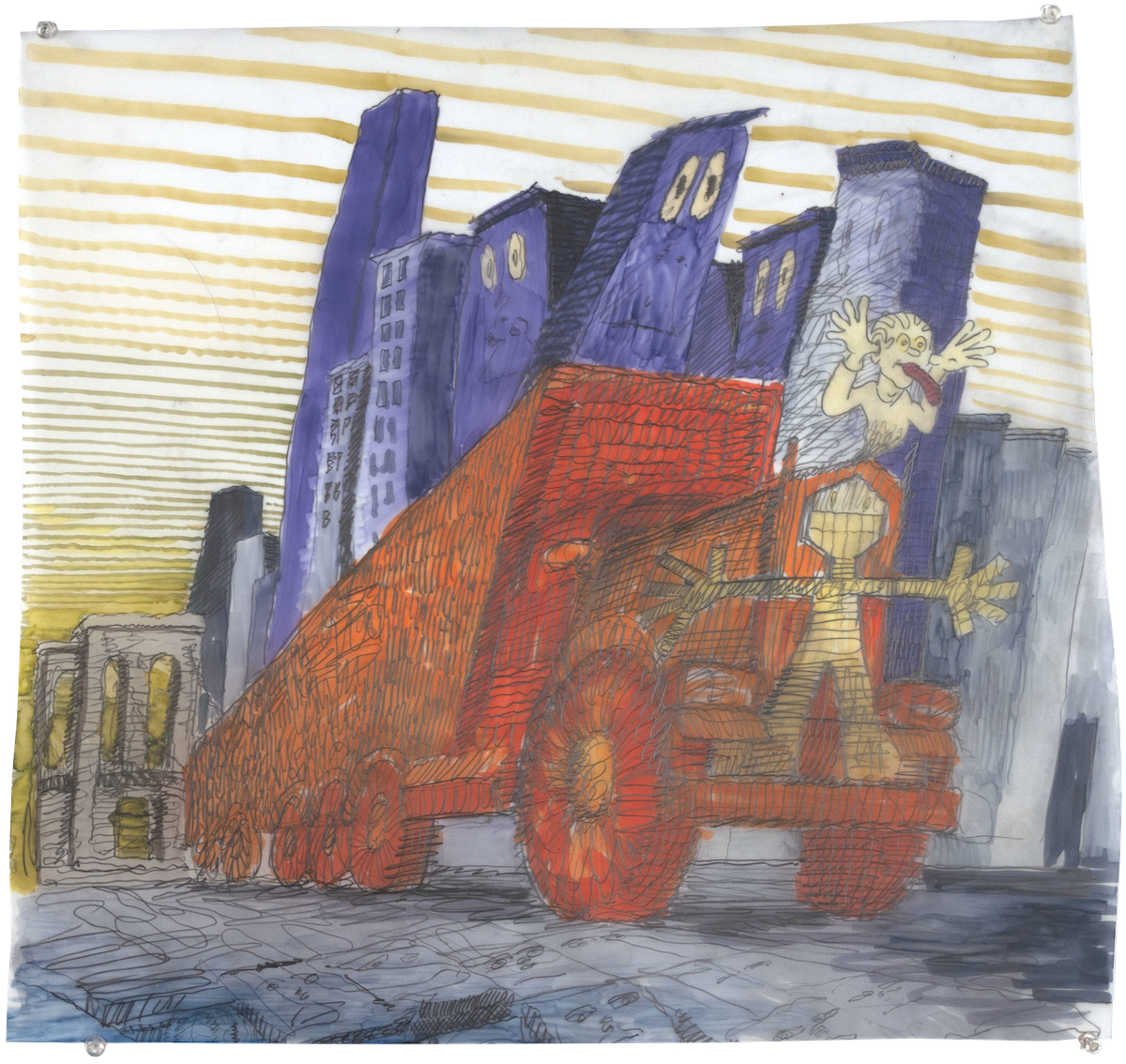 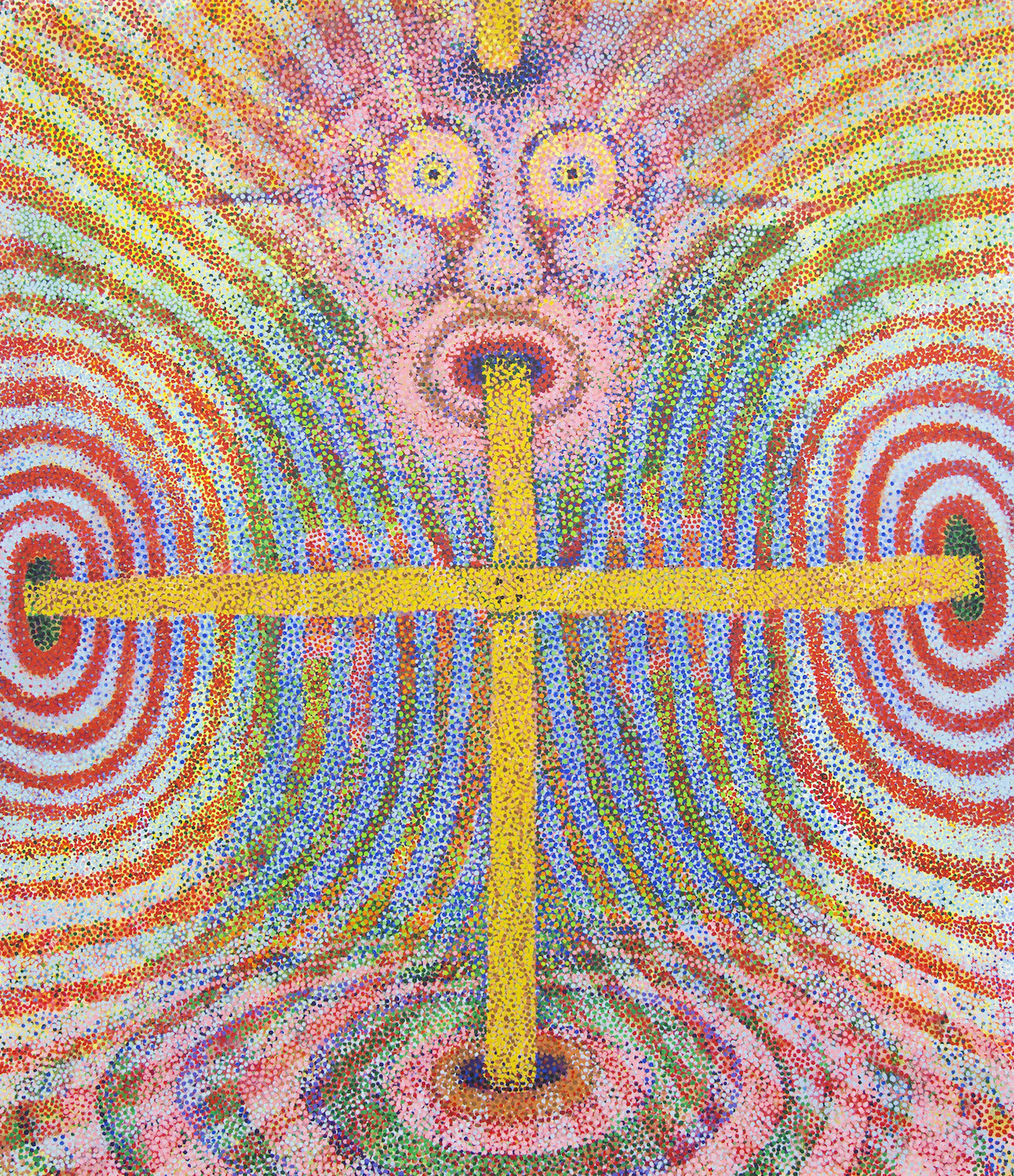 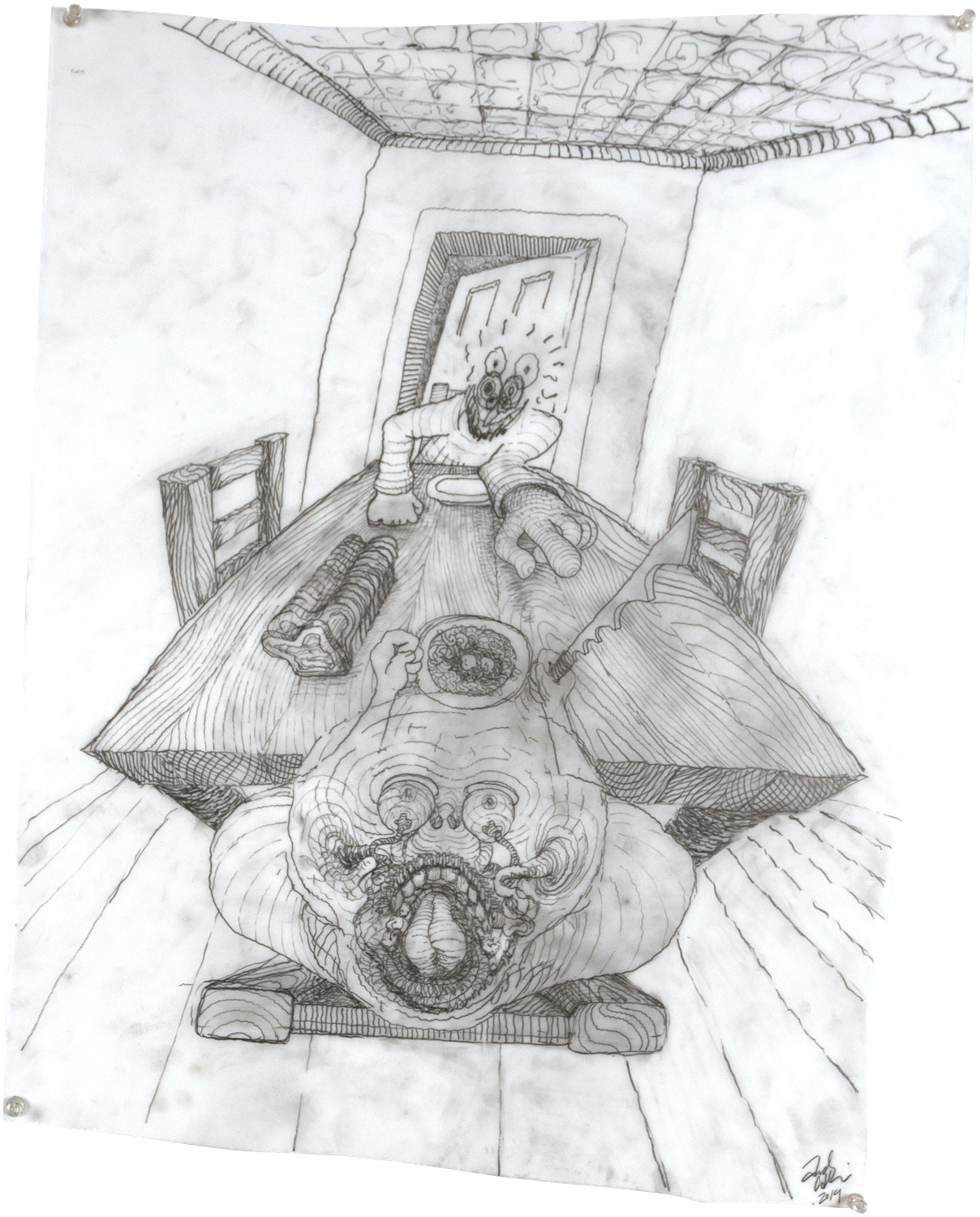 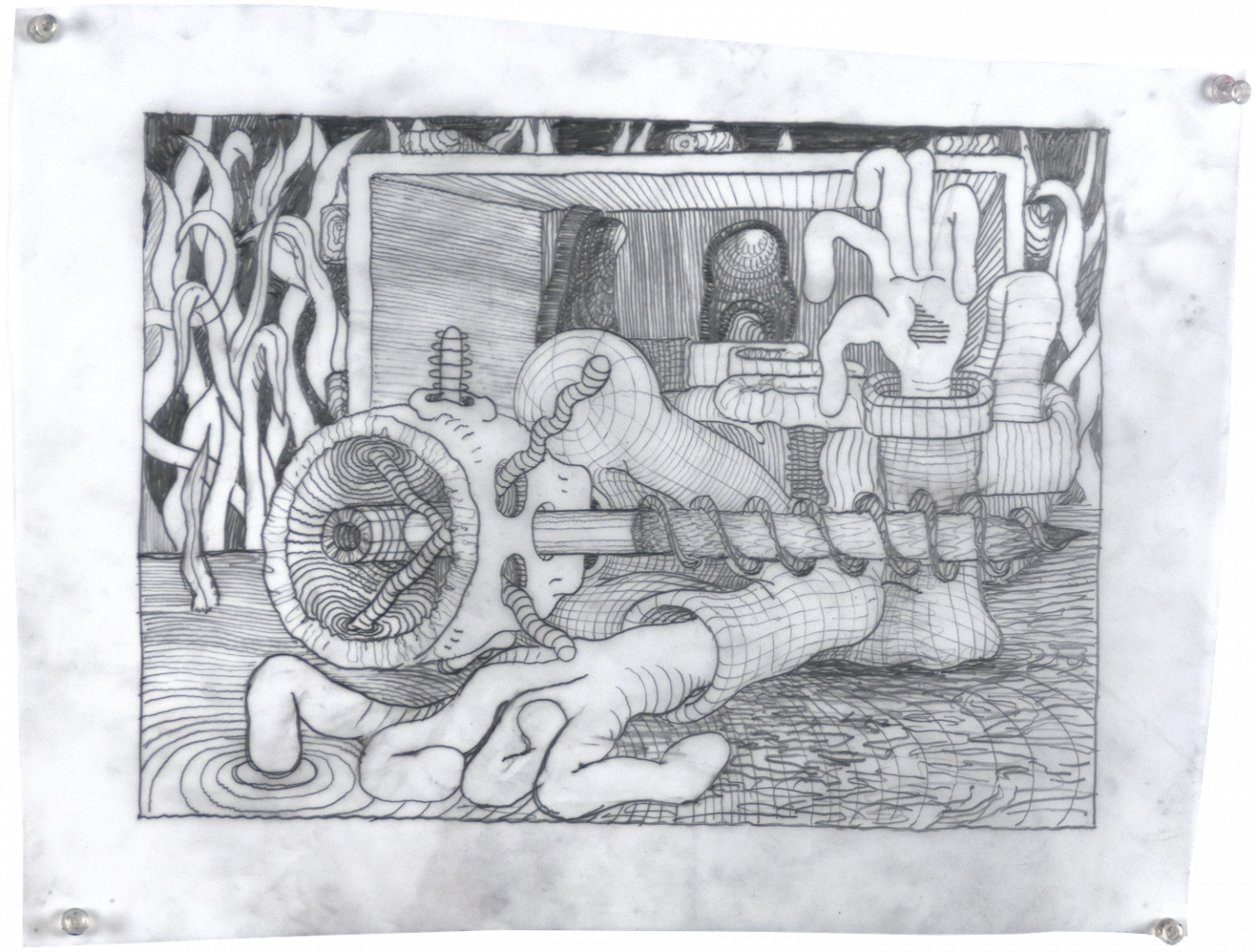 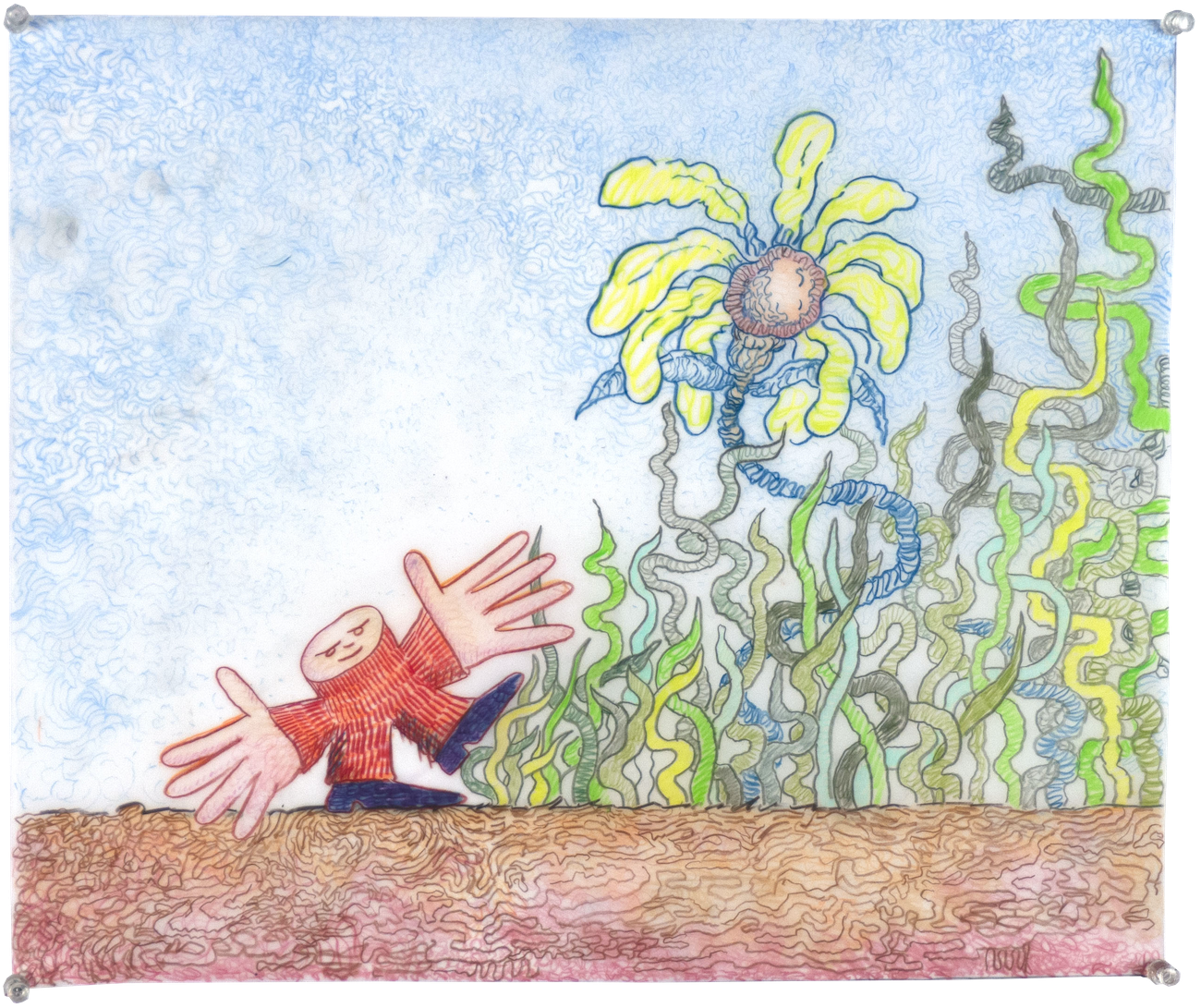 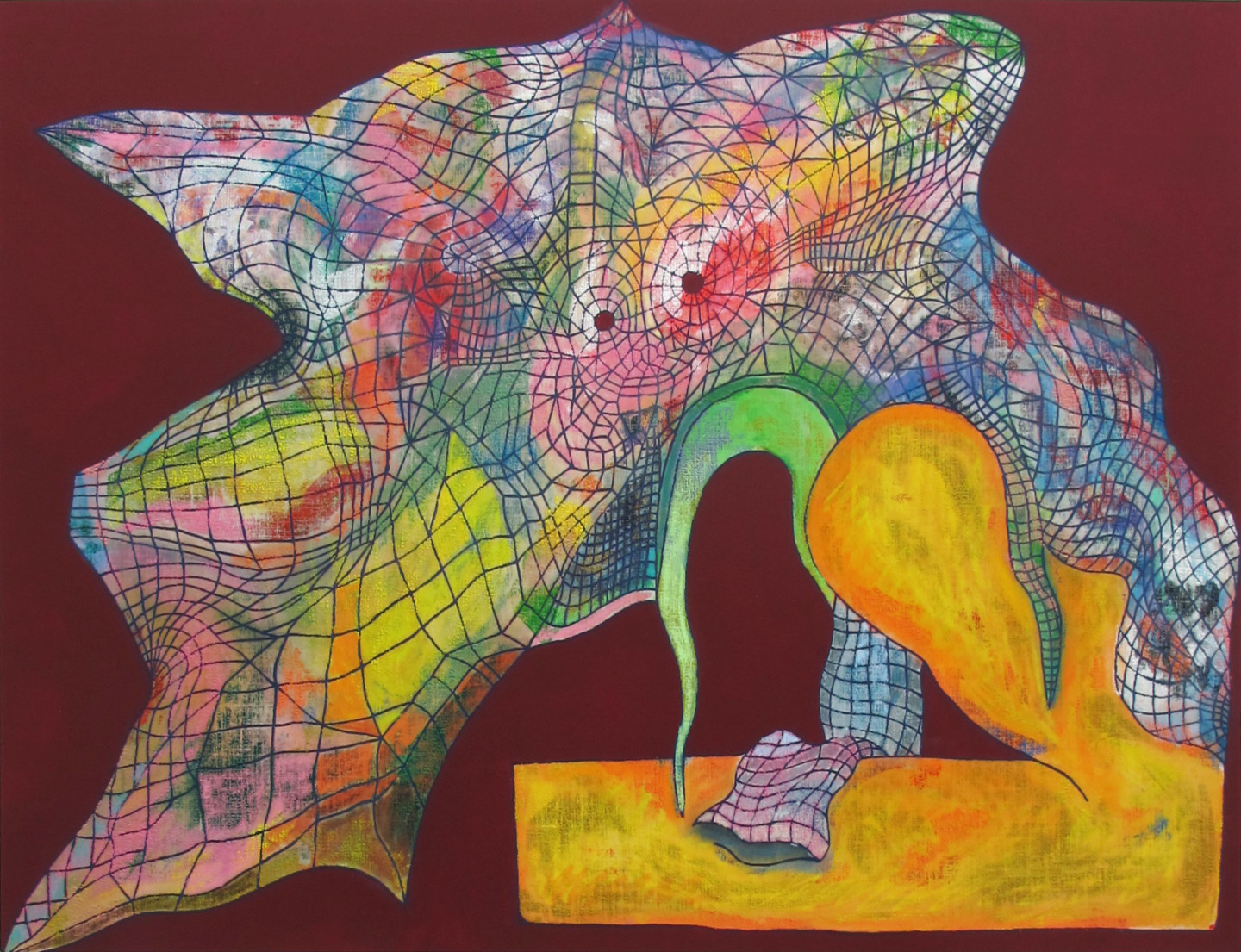 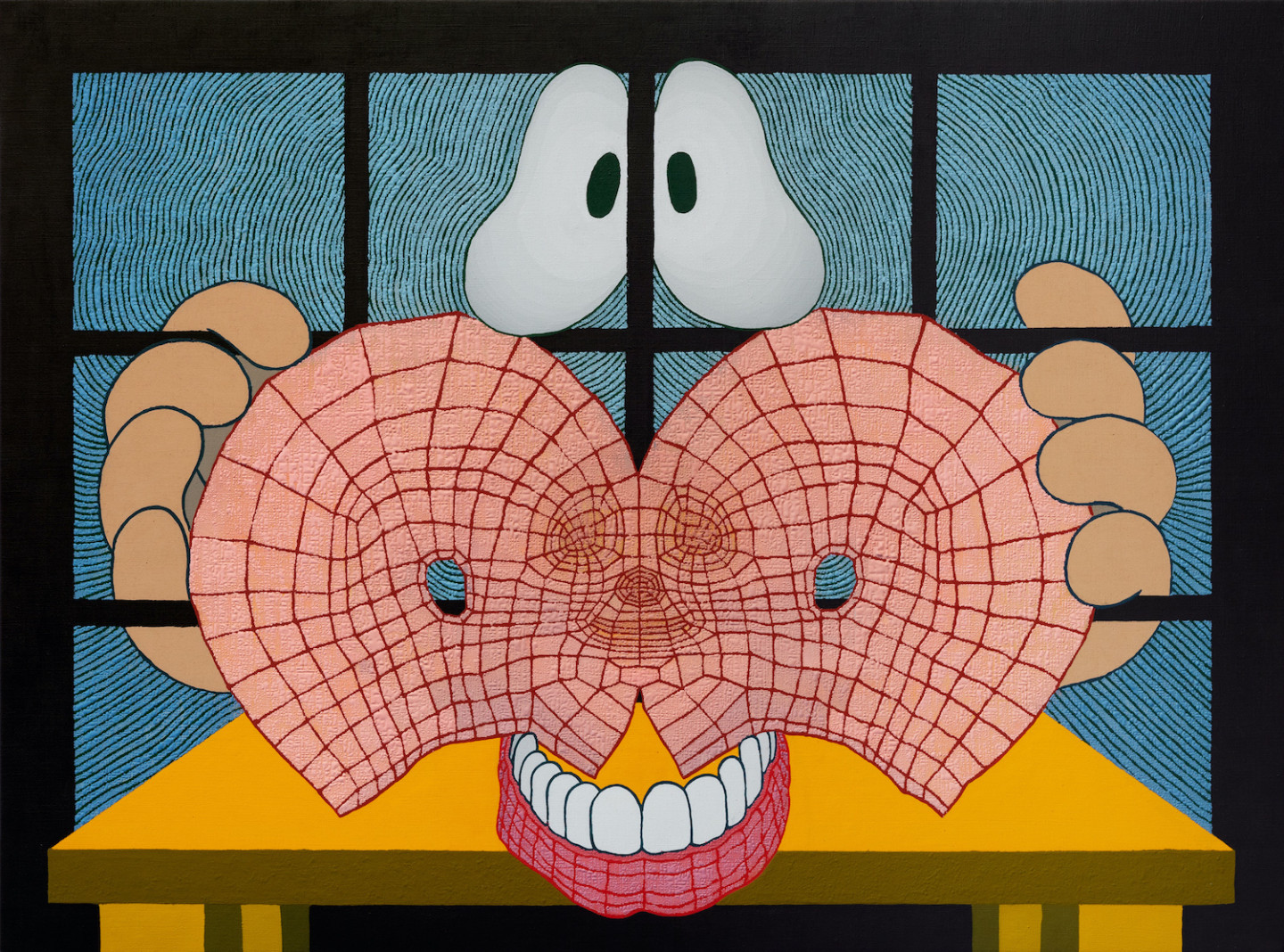 Andy Cahill’s Apparitions depict extreme states in cartoon form. Pulling from experiences so intense they can only be had for a short time, these works are borne from epiphanies, climax moments, and psychedelic breakthroughs. After the fact, these experiences are quite often remembered as traumatic or euphoric, but in the moment they exist beyond “good" or “bad.” In Cahill’s words, each work is an attempt to get at “how we understand the relationship between ourselves and the world, and what it means when our own narrative breaks down, however briefly.” In order to do so, he specifically adopts a cartoon style, as cartoons are ultimately mental projections of the self, exaggerated and grotesque, under duress, yet at the same in a moment of transformation.

Cahill describes some of the experiences that led to these works. One involves tripping hard for the first time on a rooftop: “Feeling my body separate into a series of mechanical processes, sucking air, circulating blood. I felt uncomfortable, and was having trouble locating myself, so I looked up at the sky. The clouds resolved into an impossibly complex, leering face. The trees were dancing and the whole world was animated, like a Felix the Cat cartoon, and it was all looking at me. […] Suddenly I was laughing because I had been let in on the joke, and it was the funniest thing I'd ever heard. I wish I could remember what it was.” In another, the artist was hit by a car: “My life didn't flash before my eyes, but I had a decisive thought in that moment, as the car hit me. The thought was, Oh, fuck, I thought I had so much more time.”

The stylistic variations in these works, which span the past five years, speak to this variation in experiences that are tied by their exceptional intensity. In works like Cant Help It (2017) and Private Party (2021) the acrylic paint is pressed through the weave of the canvas from the rear, further fragmenting and pushing forward the image in a more literal, material sense. In pieces like Wide Eyed (2017) and Too Much Snake, Not Enough Grass (2016) the image accumulates on the canvas through many layers of paint applied in freehand lines from a tube. The works on the paper are registered onto transparent drafting film. The apparatuses from these images are sometimes acquired by tracing existing images, for example from early New Yorker cartoons, as another approach to forming images of these, while more pointedly referencing the cartoon lineage that they appear with in.

Andy Cahill (b. 1985 Amherst, MA; lives and works in in Brooklyn, NY) graduated from the Rhode Island School of Design (2008) and The School of the Art Institute of Chicago (2010). Solo exhibitions include Home at Safe Gallery, NY (2017), Icons and Rituals at Document, Chicago (2017), Anthem of the Sun at Canada, NY (2016), CHARACTER at V1 Gallery, Copenhagen (2016), and Poor Richard Scumbag at Paris London Hong Kong, Chicago (2015). His work has been presented in group exhibitions including MOVES THINKS REPEATS PAUSES at Tony Wight Gallery, Chicago and High Density, Oblique Function at Proxy, Providence.

Andy Cahill
The Sum Of Its Parts
2016

Andy Cahill
Too Much Snake, Not Enough Grass
2016

Graphite and marker on drafting film