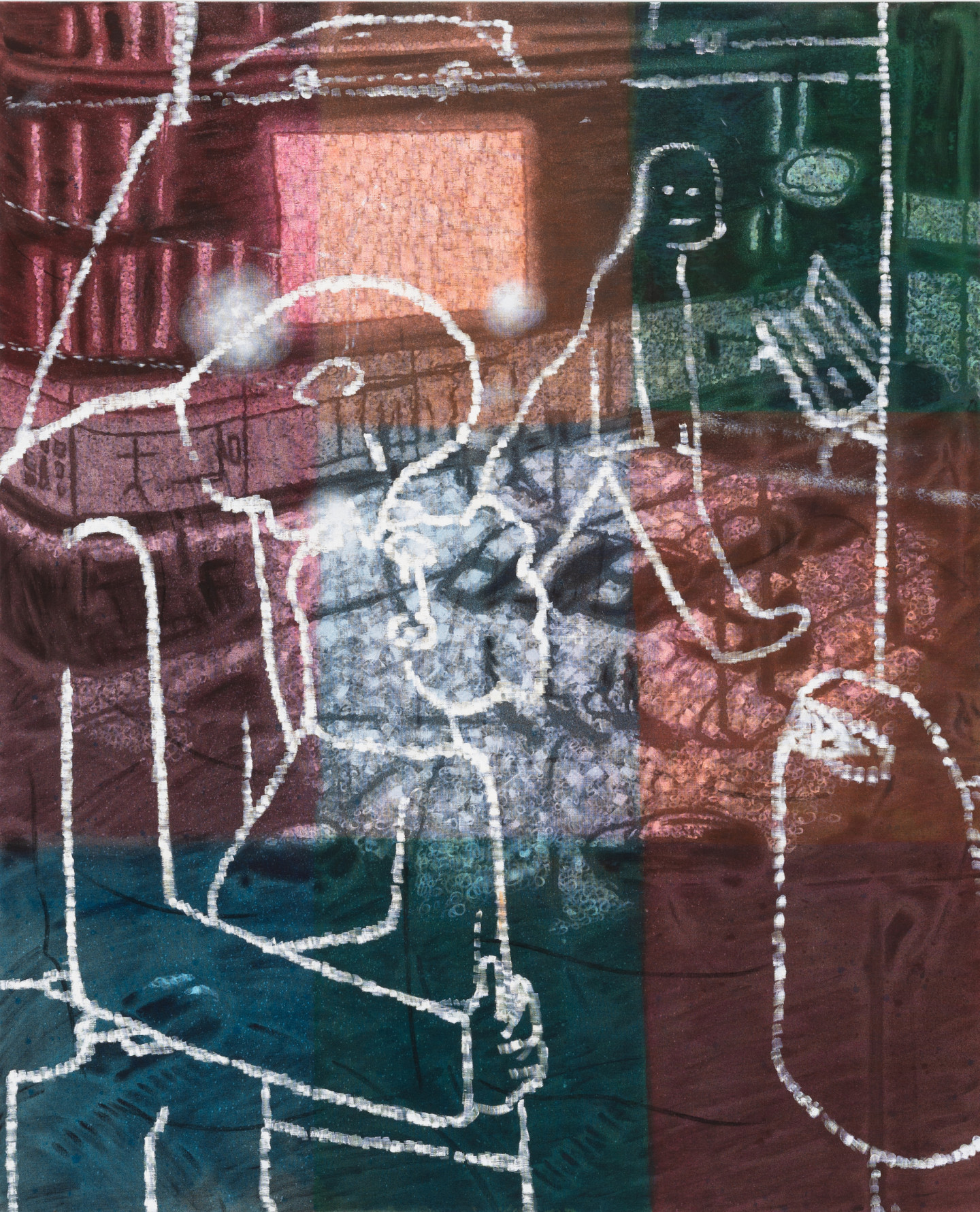 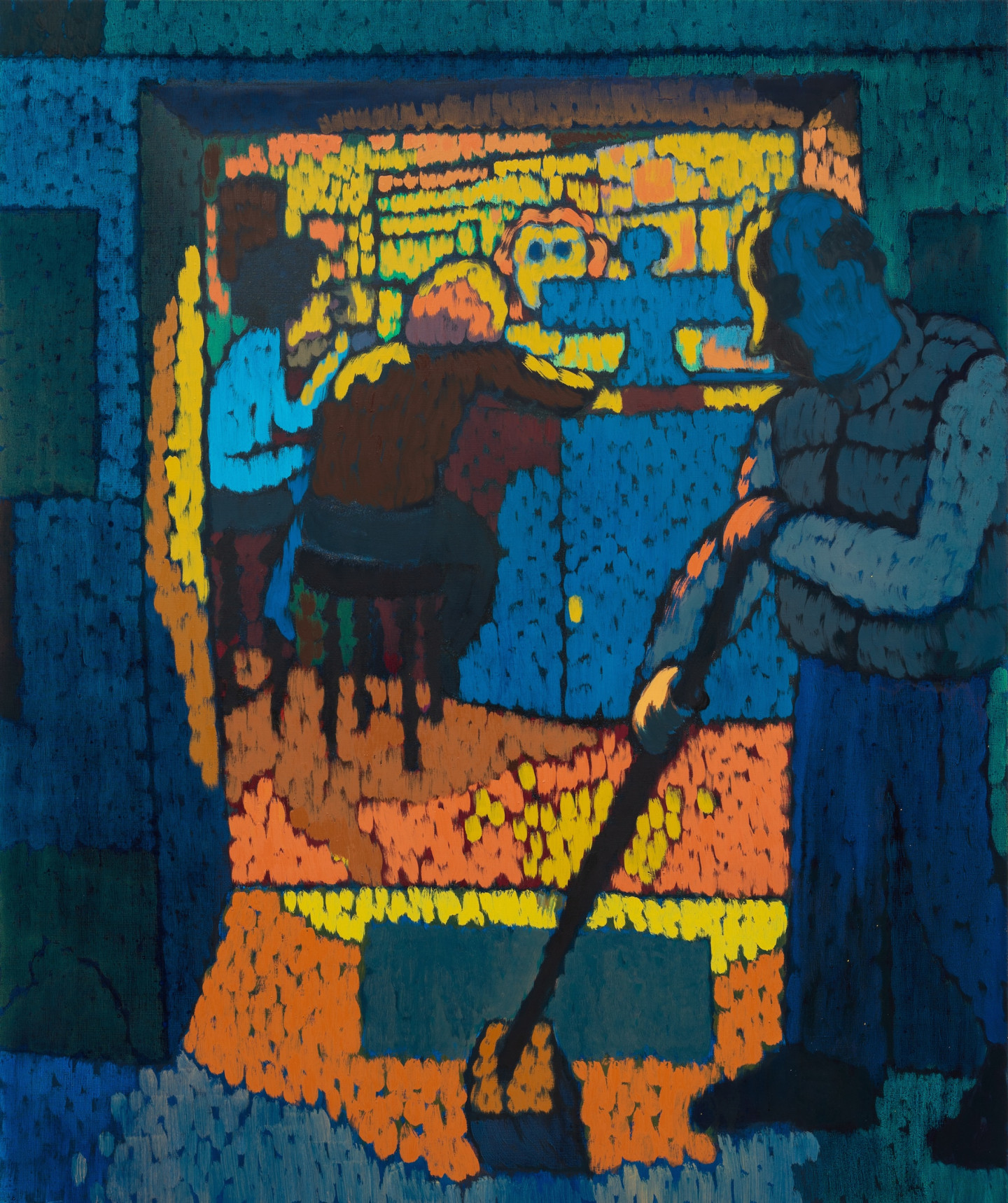 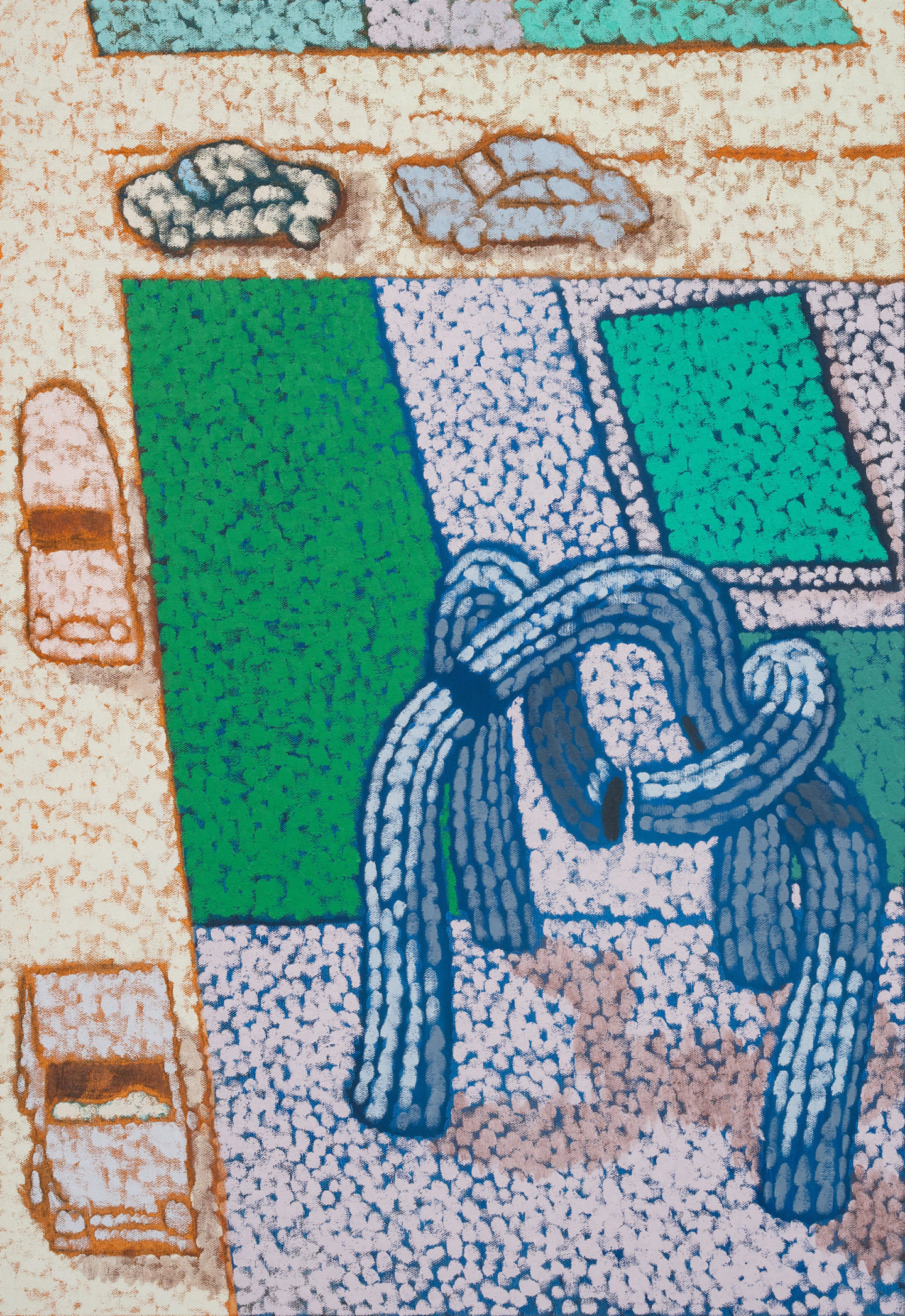 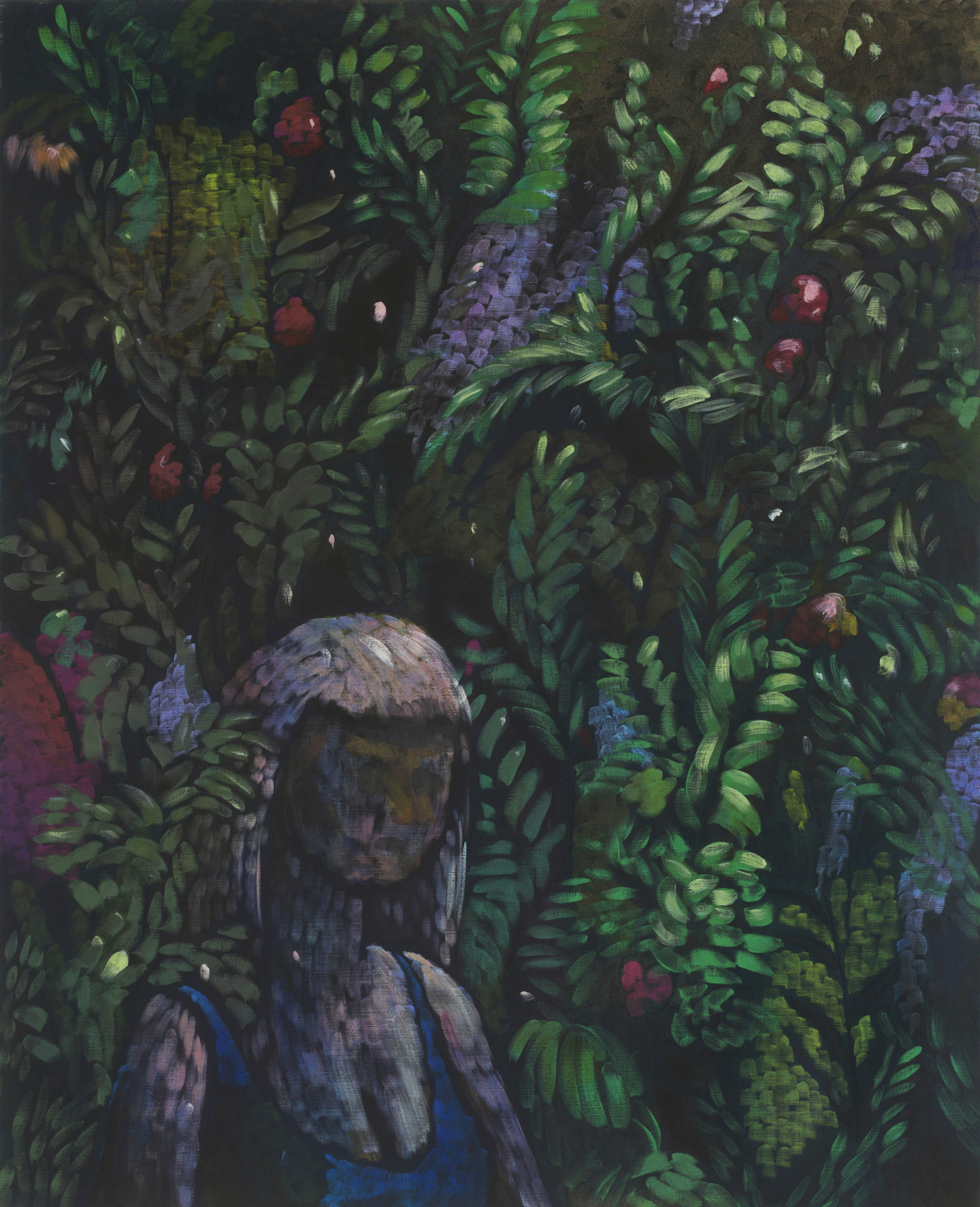 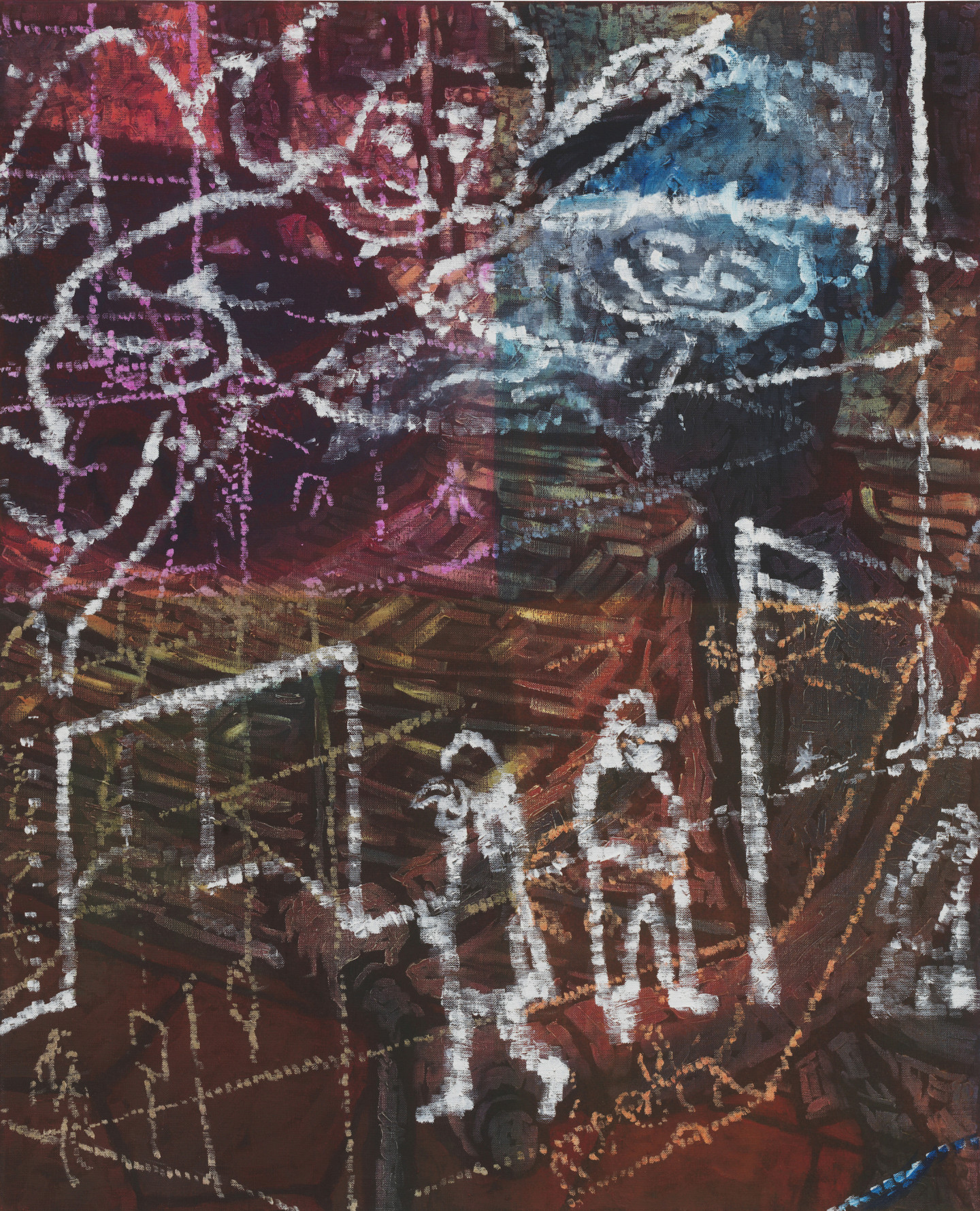 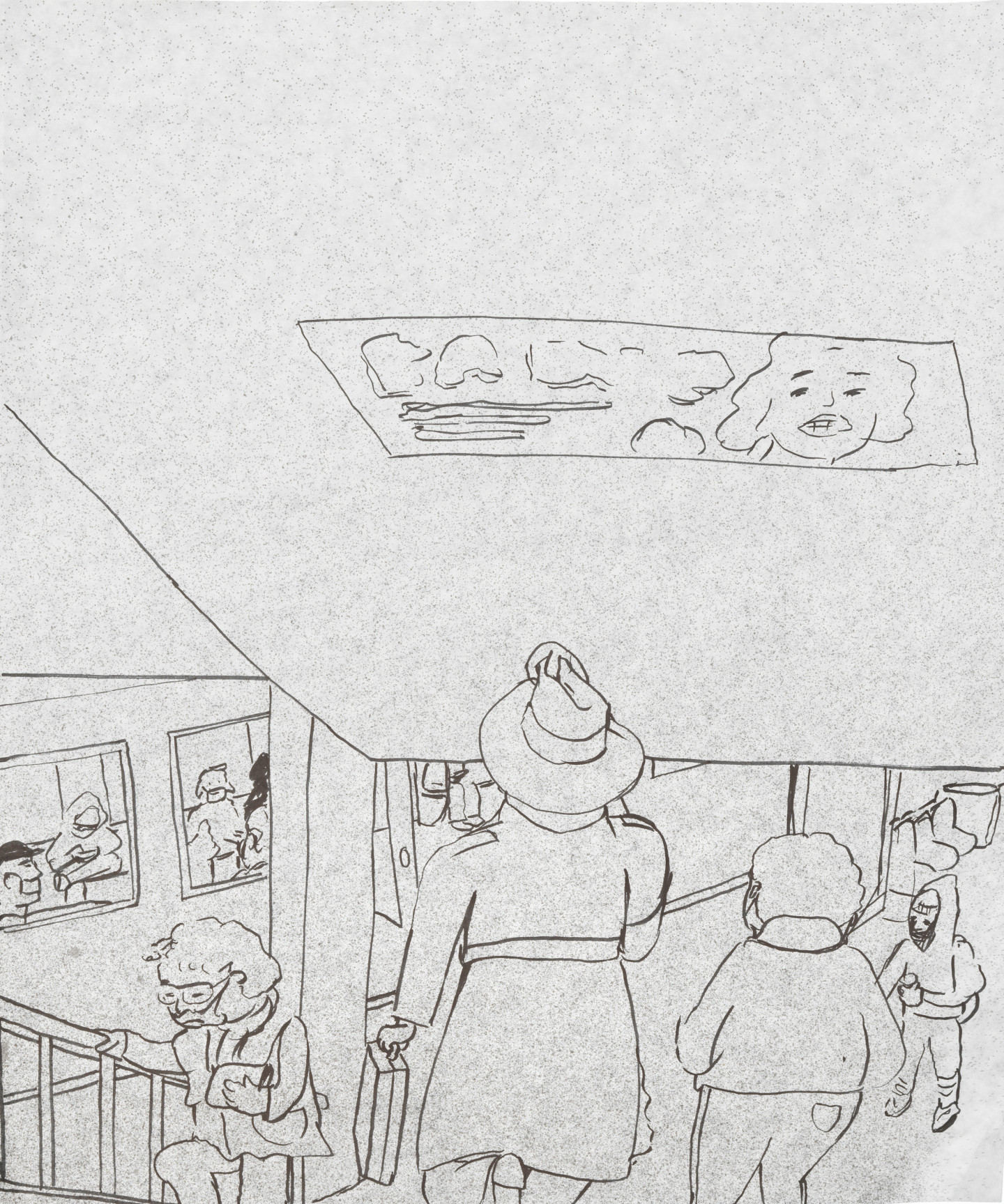 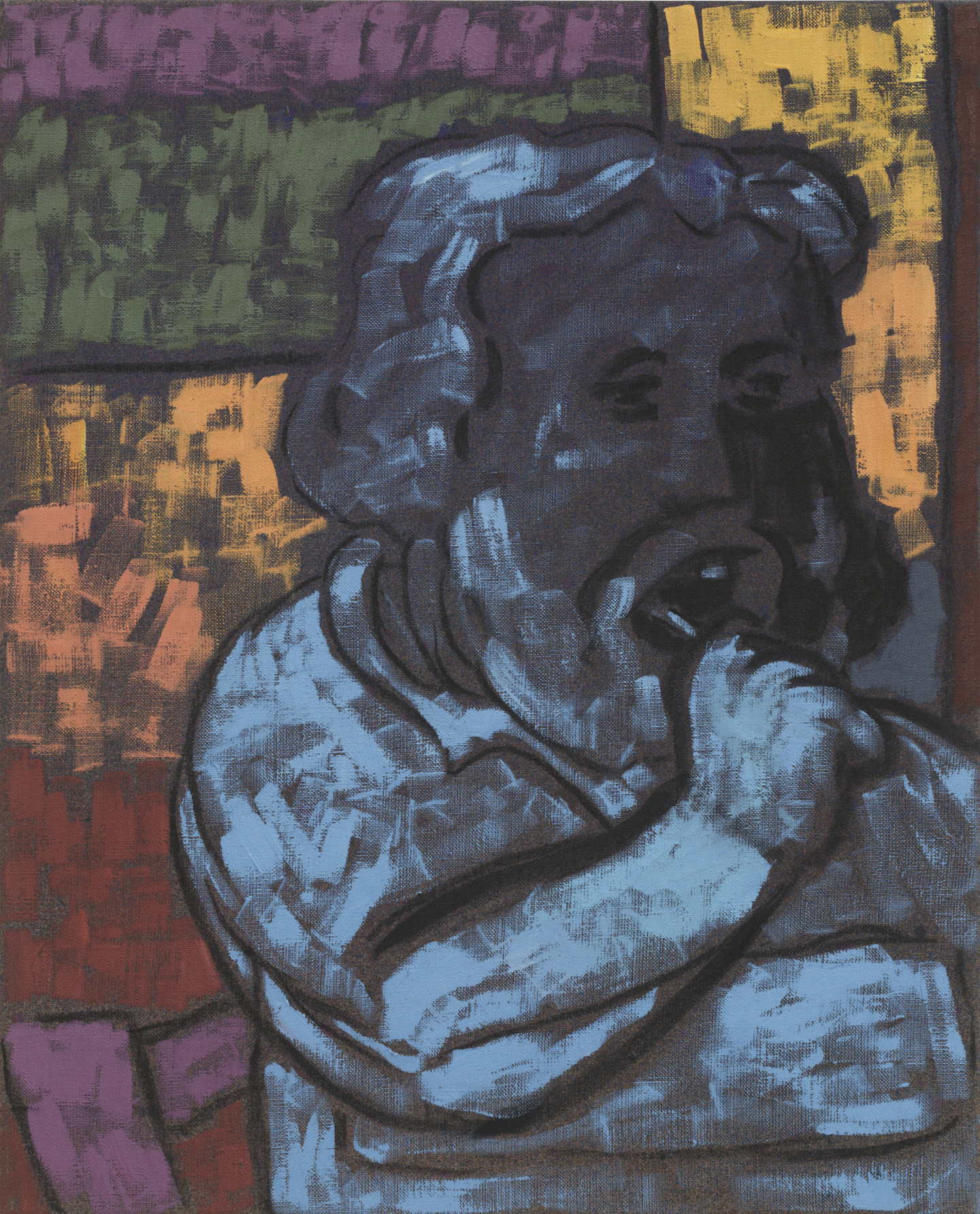 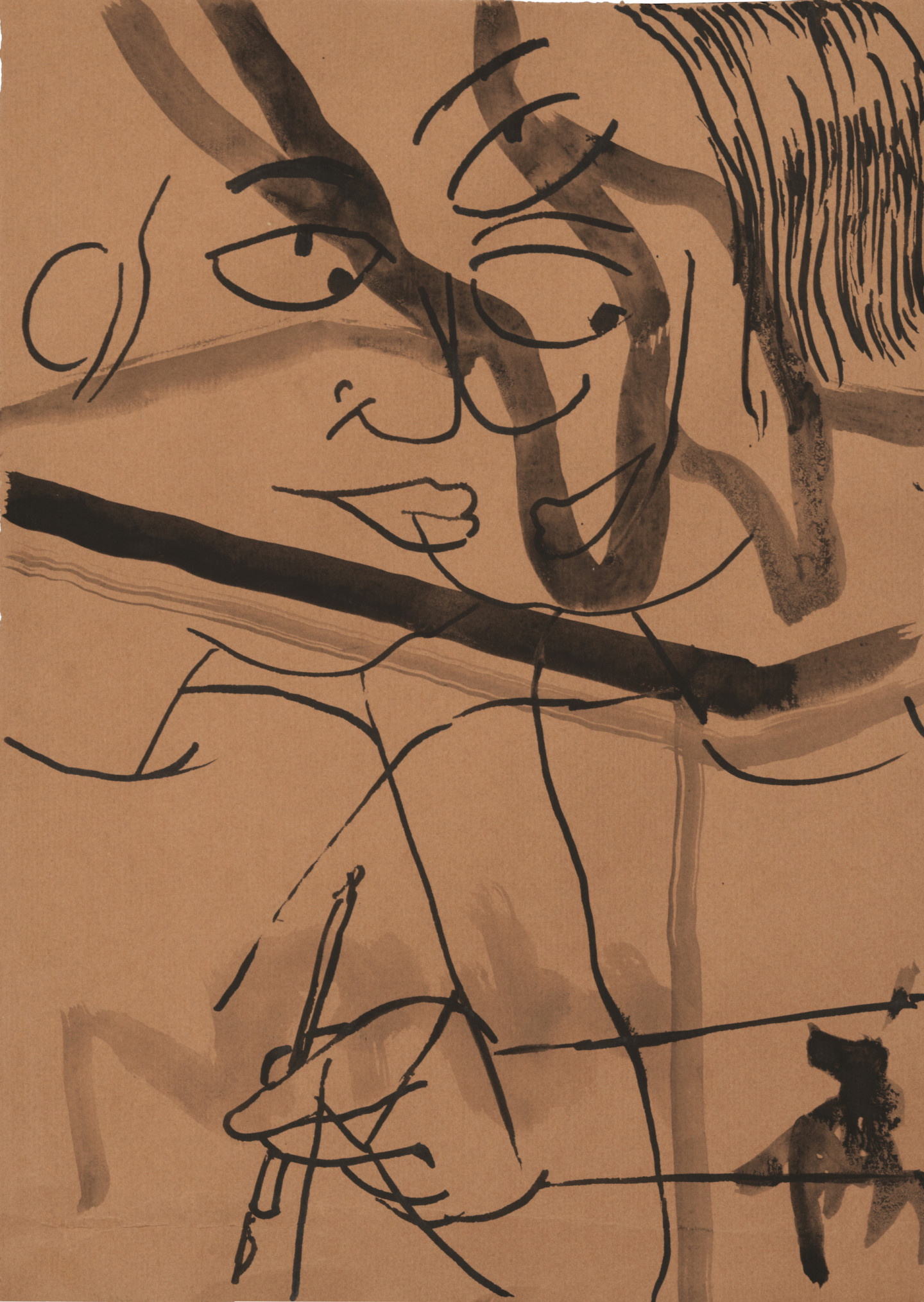 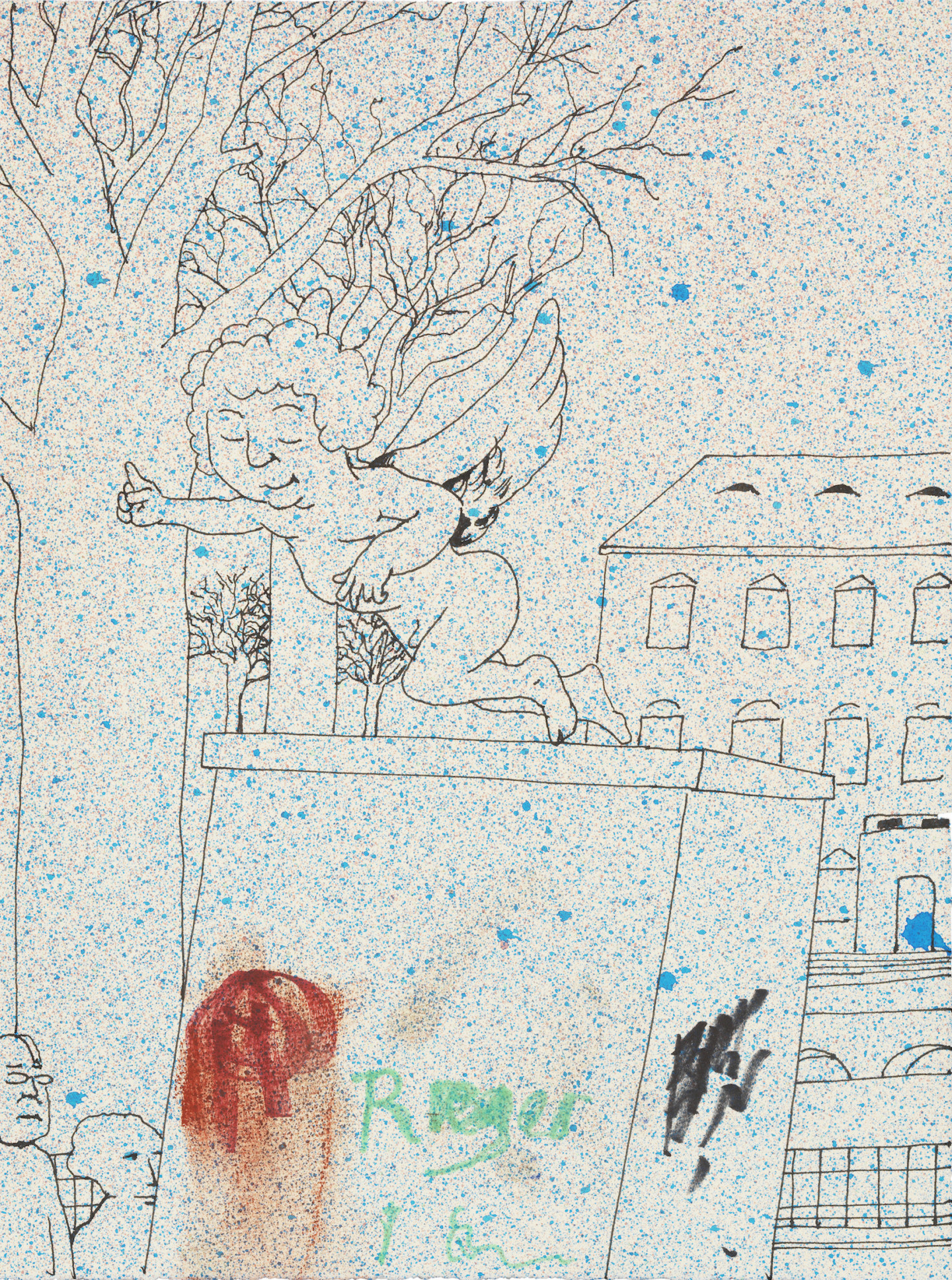 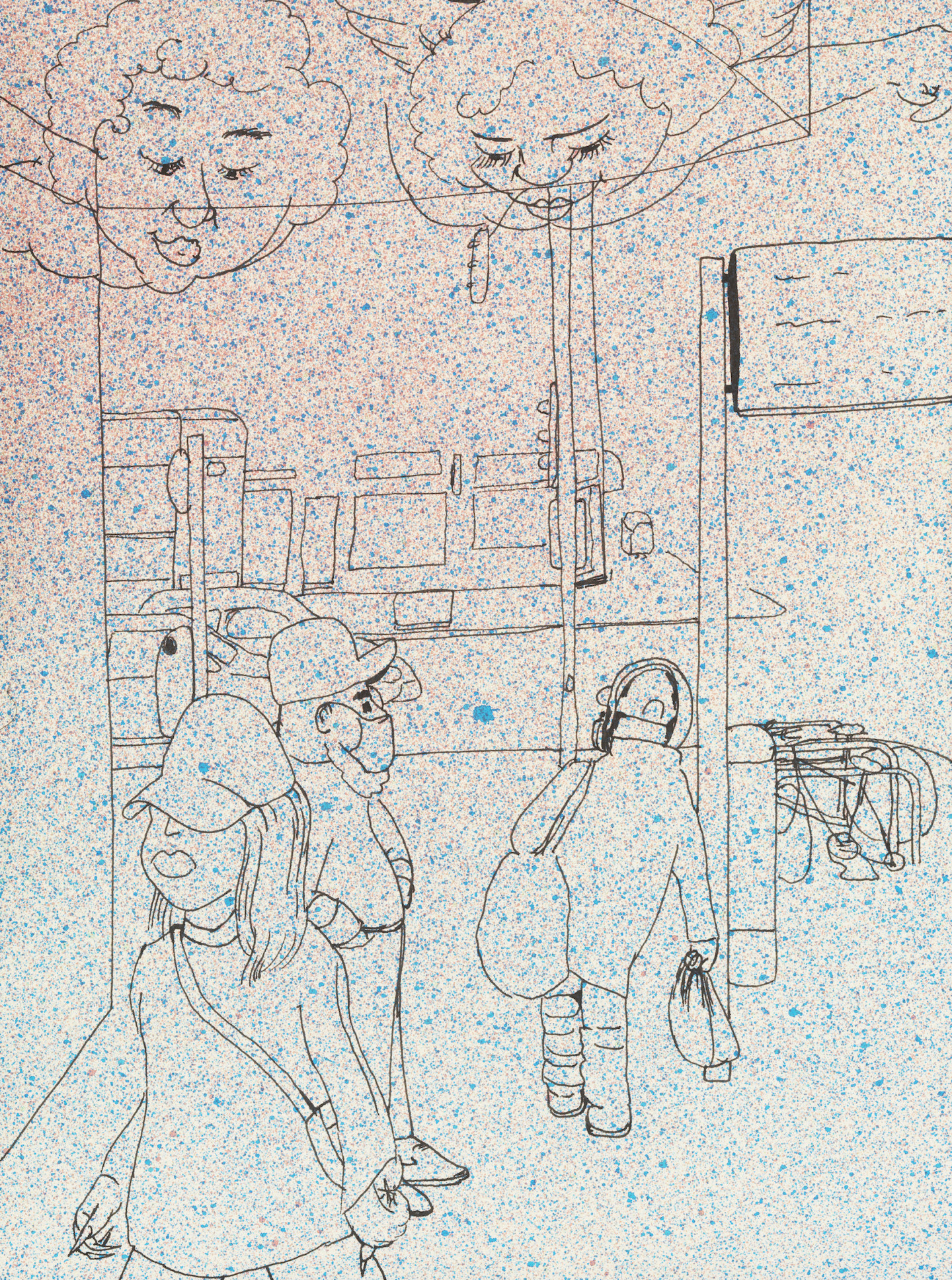 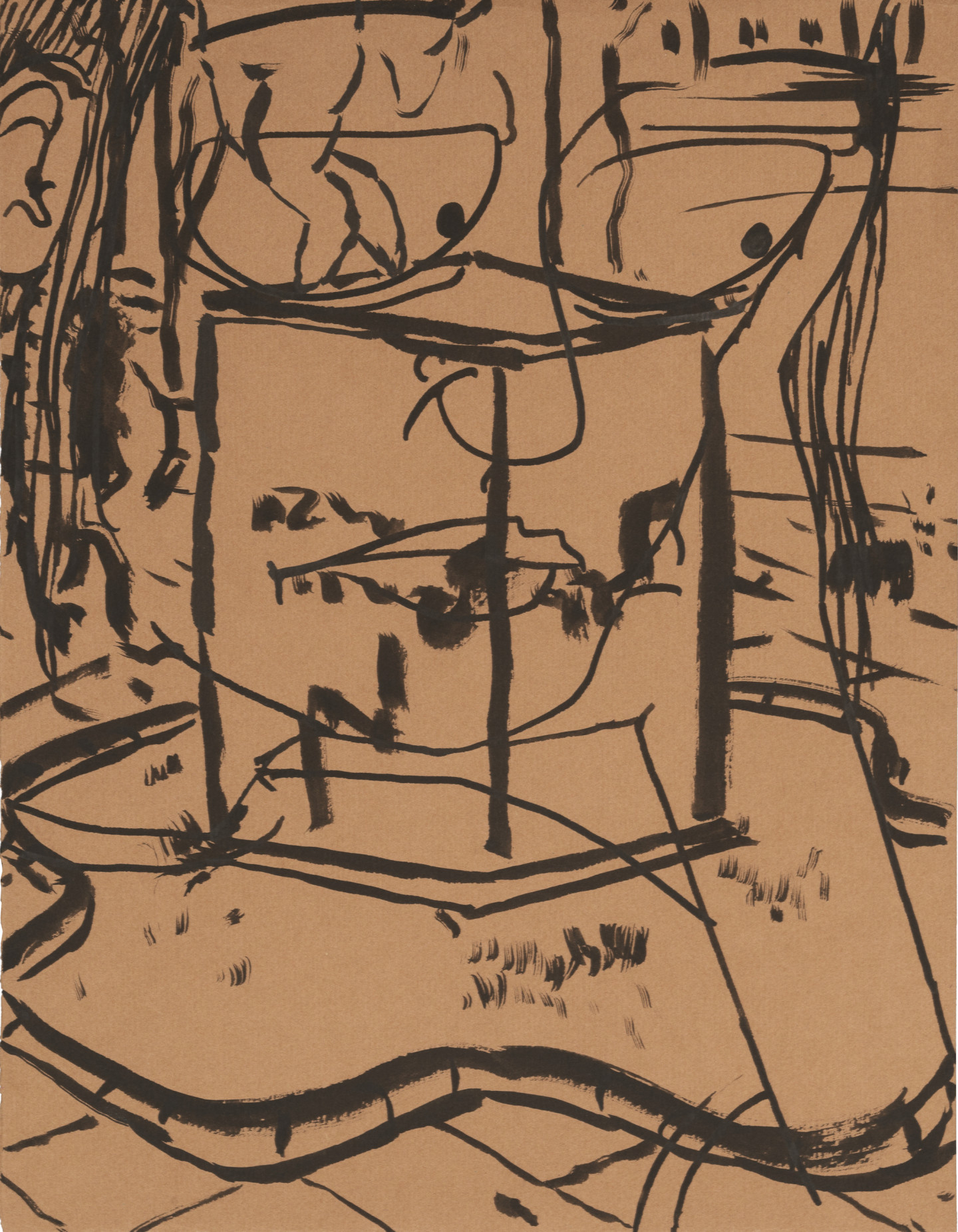 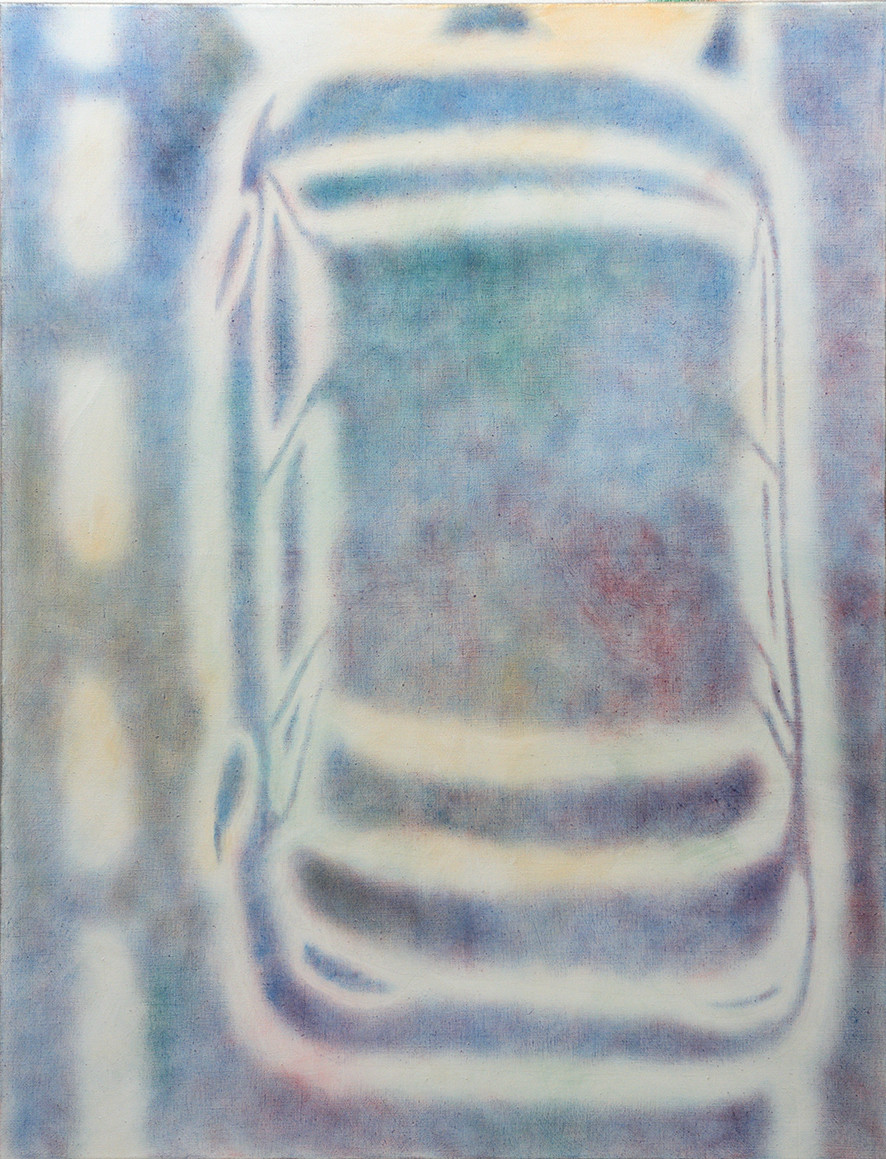 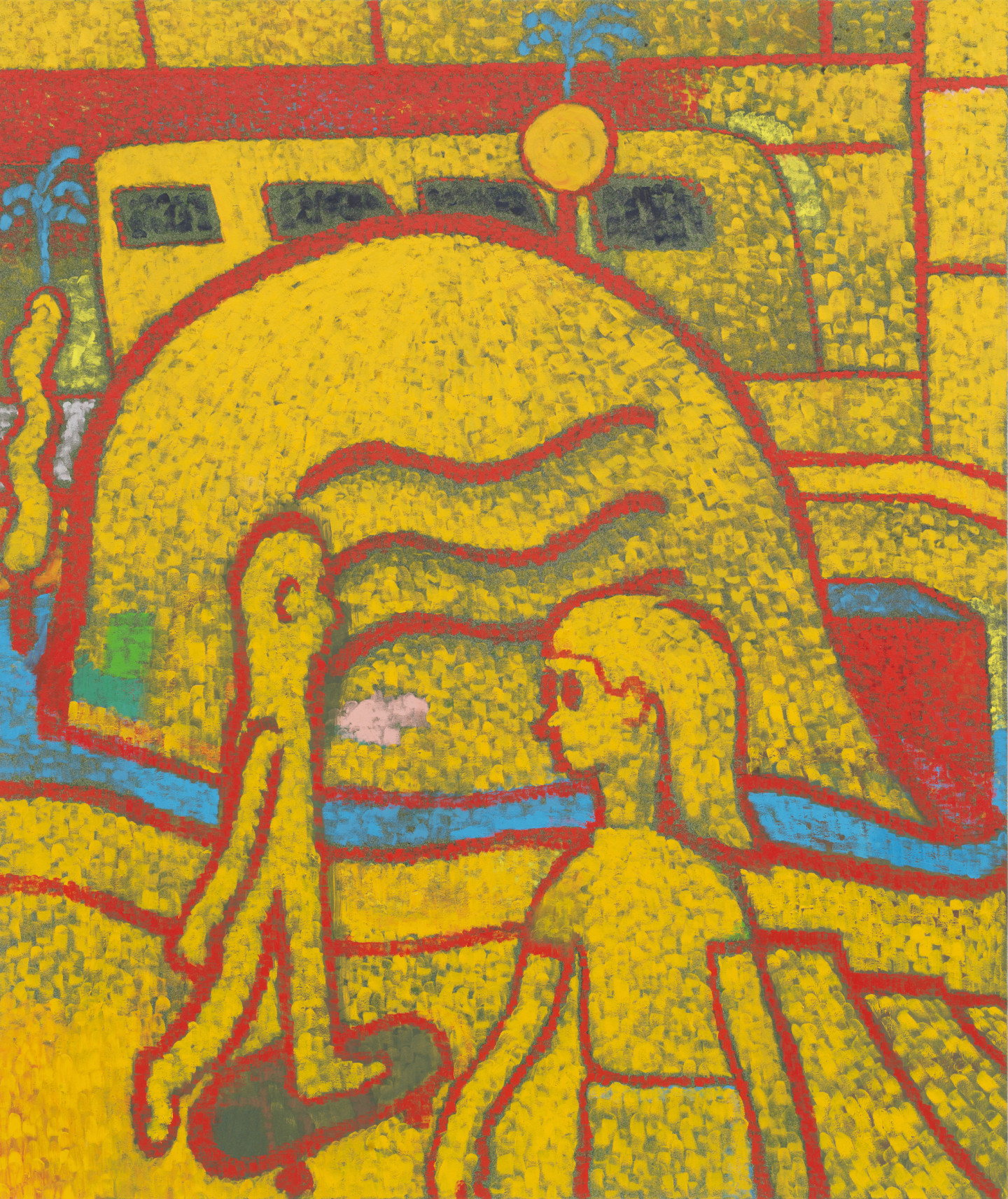 Maximilian Kirmse’s paintings and drawings contain a frenetic universe of imagery. Figures move through city streets on foot and in cars, pausing to think, kiss, or draw. As indicated by its title, Kissers Kissing on Kudamm presents a group of works inspired by the artist’s daily observations in his hometown of Berlin and on its popular street of Kudamm (often compared as the city’s Champs-Élysées), connecting moments of life as they pulsate through the familiar neighborhood. Kirmse has formulated a visual language that is stylistically iconic and recognizable, while remaining deliberately heterogeneous in its layering of technique and form. In his paintings, the artist often uses an approach resembling pointillism, separating individual marks of color to create a shimmering visual field while at the same time equalizing the image’s details. The process is seemingly flipped in Kirmse's works on paper, through his quick application of splattered paint that becomes the background for figurative images rendered in ink.

Together, the works on view survey the deliberate approach behind Kirmse’s range, which functions as if to both hide and offer visual clues, drawing the viewer further in. Forms from one painting might reappear in a wholly different way in another, where the curve of a limb transmorphs into a public monument, or the shape of an eye elsewhere becomes a shirt collar. It is through Kirmse’s shifts in style that these possibilities occur not only within the image, but beyond it as well, addressing the broader historical lineage in which it sits. In this realm, Kirmse’s pointillist technique becomes connected to the individuated dots of the digital realm, from the screen pixels through which the viewer accesses this online exhibition, to printed CMYK color separation technologies. In bringing these modes together, Kirmse formulates an expanded visual paradigm in which all things converge, removing hierarchies of perception in favor of a direct, observational, and equalized approach to image-making and, in turn, viewing.

Maximilian Kirmse (b. 1986 in Berlin) studied at the Academy of Visual Arts in Leipzig and the Art Academy in Dusseldorf. He has exhibited at venues including the Kunstverein Tiergarten, Berlin; Kunsthalle Bozen, Bolzano; the Kunsthalle der Sparkasse, Leipzig; Nino Mier Gallery, Los Angeles; Bundeskunsthalle Bonn; the Museum Wiesbaden; Kunstsammlungen Chemnitz; and Deichtorhallen Hamburg. His works are in the public collections of the Kunstmuseum Bonn and the Kulturstiftung des Freistaates Sachsen.